Anatomy of a restaurateur: Romany Marie 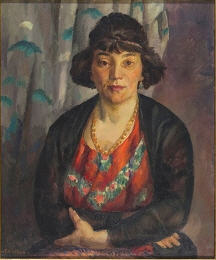 Marie Marchand, whose business name was Romany Marie, was taken aback in the 1950s when a Greenwich Village restaurateur declined to host a dinner for Marie’s artist friends on the grounds they would occupy the tables too long. In a 1960 interview recorded in Romany Marie, Queen of Greenwich Village by Robert Schulman, Marie reflected, “It was a little shock to me. Poor dear, she felt she had to have turnover, she was in the restaurant business, not in the venture of maintaining a center for lingering tempo.”

For someone such as Marie who had herself been in the restaurant business for over 30 years, this would seem to be an odd reaction. But hers were odd restaurants – she preferred to call them centers – where patrons were encouraged to linger. If they lacked money for a meal, and they fit her criteria as creative spirits, she let them eat for free. Luckily, she had a brother who helped her out financially because hers was not a lucrative business. On the other hand, she encouraged and helped sustain dozens of artists and creators such as Buckminster Fuller, Burl Ives, Stuart Davis, Edna St. Vincent Millay, and John Sloan (one of the many artists who painted her portrait – pictured above).

Marie, who as a teenager came to the US from Romania in 1901, said she patterned her taverns (so-called though she served no alcoholic drinks) after the inn her mother ran for gypsies in the old country. To honor her mother, Marie dressed as a gypsy and usually decorated in rococo style with peasant scarves, batiks, pottery, and her patrons’ paintings. Several of the 11 locations she occupied over the years featured fireplaces, which to the horror of health inspectors she used for broiling steaks.

After working initially in the garment industry Marie brought her mother and sisters to New York. The family lived on the lower East Side near the Ferrer School which offered workers free adult education. She became involved with the school where she met artists and thinkers who later became her patrons and, sometimes, volunteer waiters. In 1914 she opened her first place in the Village’s Sheridan Square. Amenities were sorely lacking, with both stairway and toilet facilities located outdoors. For years she had no electricity, candles furnishing the only lighting. 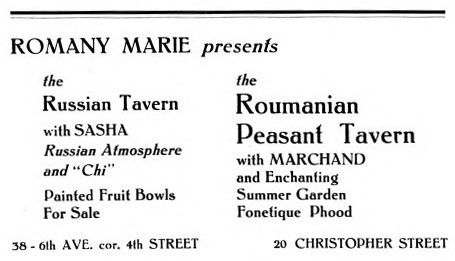 In 1915 she moved to 20 Christopher Street and it was at this location, the one she occupied the longest, that her name became well known. Another location of renown was 15 Minetta Street, with an interior designed by Buckminster Fuller in the late 1920s. In the 1960 interview Marie quoted Fuller as saying, “I’m going to fix up this place in a Dymaxion way.” He outfitted the restaurant with canvas sling chairs, “aeroplane tables,” and aluminum cone lights. Instead of the darkness her patrons were accustomed to, Fuller lit the place up by painting the walls silver. Sculptor Isamu Noguchi assisted (“Bucky got me to help him with painting the place up solar.”). Everyone disliked the brightness, the tables wobbled when food was placed on them, and the chairs collapsed when sat on. The experiment failed but Marie promised Fuller one free meal a day for the rest of his life, a benefit that carried him through the Depression.

In addition to Romanian dishes such as meat pies and cabbage rolls, Marie specialized in strong coffee which she advertised as Café Noir à la Turque. Her signature dish was ciorbă, a soup of vegetables, meatballs, eggs, lemon juice, and sour cream. Marie’s husband Arnold, a difficult man who was known to deliberately break dishes and otherwise sabotage her efforts, rendered this dish on his phonetic menu as “Tchorbah, peasant soop.” A menu by him also listed “Boylt Beeph wit been’s & hors radish,” and “Lone Guy Land Greens.”

Marie continued in the restaurant business until 1946 when she retired to care for Arnold. Each time Marie moved her restaurant she announced it with a sign which said “The caravan has moved.” Its last move was to 49 Grove Street.