Delicatessing at the Delirama 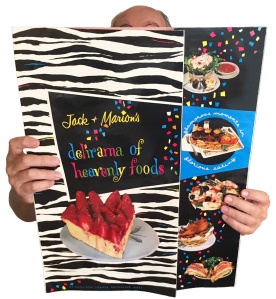 The gigantically oversized menu shown here from Jack & Marion’s Delirama in Brookline MA is 21.5 inches tall, 34 inches wide fully opened, and contains over 230 items not counting drinks, desserts, or carry-out Delicacy Platters. It was probably in use from the mid to late 1950s.

Digesting its pink and white interior is a dizzying, yet entertaining, exercise. Some items, such as the Hot Roumanian Pastromi Sandwich, are marked with a red star indicating “good profit item for Jack and Marion’s (Please order).” The Empire State Skyscraper Sandwich comes with a warning “Sissies, Please Don’t Order!” There is a “Jewish Dictionary” that explains that a “Zedeh” is “a grandchild’s press agent” while “Mein Bubbe’s Tahm” means “chopped herring at Jack’s and Marion’s.” 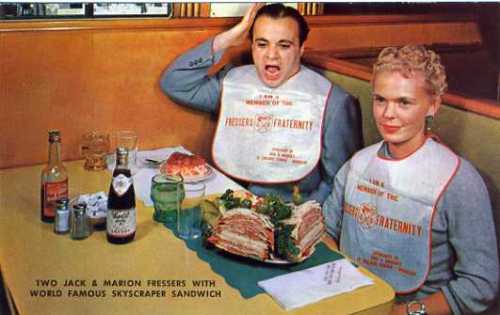 Patrons might join the “Fressers Fraternity” if they cared to admit that they had gluttonous appetites.

Hungry patrons could feast on bowls of sour cream with banana, fresh vegetables, or cottage cheese. Or on “Forshpies (before getting serious . . . a treat!”), in other words appetizers ranging from a dish of Sweet Gherkins (.35) to Chopped Herring (.65) or a Jumbo Shrimp Cocktail (.95). Along with shrimp, the deli also served non-kosher dishes such as Canadian Bacon Steak and Lobster Surprise, one of the most expensive choices at $5.95. Parties of six could feast on a $25 “Sandwich Supreme, served on a sterling silver platter (which remains our property.)” Like delis generally, sandwiches formed the bulk of menu offerings. 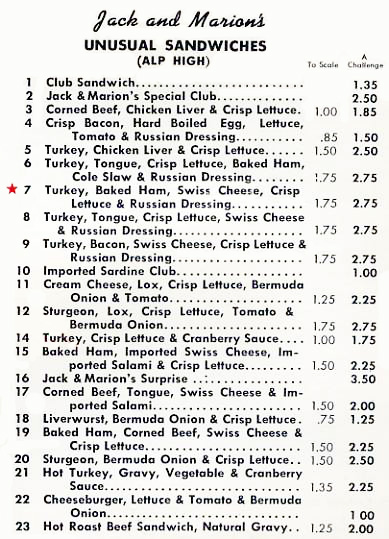 The deli on Harvard Street in Brookline’s Coolidge Corner was owned by Jack and Marion Solomon who opened it in 1950, advertising themselves as “designers and builders of the famous Skyscraper Sandwiches.” Jack, who had previously operated a deli in Brighton, explained that he modeled the Delirama on the famous Raymond’s on Boston’s Washington Street. Raymond’s was a bargain store that used corny advertising by a fictitious Unkle Eph who coined the store’s slogan “Where U Bot the Hat.” Jack Solomon said he, much like Raymond’s, had “done everything to make this the most talked-about restaurant.” 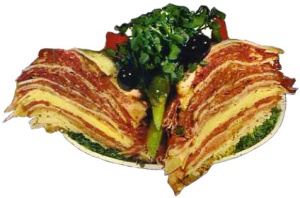 For a number of years the deli kept late hours, staying open until 3 a.m. It drew celebrities doing shows in Boston, such as players from the musical revue Bagels and Yox, who performed songs in Yiddish and other languages. In the 1950s it was often mentioned in entertainment columns in Boston newspapers. It was also a popular place for college students and couples on dates.

Despite suffering two bad fires and having the safe stolen, the Delirama persisted. It did, however, eventually withdraw from the entertainment scene and begin to keep earlier hours. The business did not survive long after the death of Jack Solomon in 1971. Despite attempts by his second wife, Valda, to keep it going, it went bankrupt and closed around the mid-1970s.