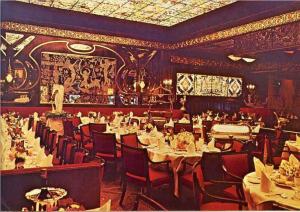 In 1965 impresario Warner LeRoy, son of Hollywood producer Mervyn LeRoy (Wizard of Oz, Mr. Roberts, Quo Vadis), opened Maxwell’s Plum as part of his theater on First Avenue and 64th Street in NYC. Hamburgers and a good wine list made it a hit with the swinging singles who crowded into the café. It was so popular that a few years later he closed the theater and expanded the café, adding a luxurious dining room with a Tiffany glass ceiling that reminded some of Maxim’s in Paris. Patrons could choose to experience Maxwell’s Plum either as a singles’ bar, a boulevard café (pictured), or a grand restaurant which, as a bonus, provided a fine view of the bar scene located on a lower level.

After a 1969 expansion the Plum seated about 250 and produced 1,000 to 1,500 meals a day. It rapidly ascended to the ranks of the city’s biggest grossing restaurants, taking in well over $5 million in the mid 1970s, with a big chunk — more than a third — from alcohol sales.

With offerings ranging from burgers to wild boar, the restaurant enjoyed excellent reviews, winning four stars from NY Times reviewers Craig Claiborne and John Canaday. For a riotously overdecorated Art Nouveau/Deco/Etc. pleasure palace, the Plum provided far better cuisine than it needed to. In the egalitarian spirit of the later 1960s and 1970s, many diners appreciated that its good food was uncoupled from the snobbery then associated with New York’s top restaurants. Canaday hailed the Plum for delivering first-class service “whether you were known or not,” while he stripped stars from La Côte Basque and La Grenouille because of the “disparity in their treatment of favorite (usually fashionable) customers and unknowns.” LeRoy claimed that he didn’t object to patrons looking shaggy, adding, “And if they don’t want to eat fancy food, they can have a hamburger. Whatever.” James Beard declared that he enjoyed hamburgers as much as paté en croute and decided to feature the Plum’s chili recipe for one of his 1973 columns.

LeRoy’s expansions were funded by Hardwicke Companies which ran resorts, wild animal parks, duty-free border shops, and Benihana restaurants. Hardwicke also financed LeRoy’s acquisition of the even-bigger-grossing Tavern on the Green, a failed San Francisco version of Plum (below), and a short-lived 900-seater in DC called Potomac. Hardwicke, under the control of a former Sara Lee exec, came under suspicion for influence buying in its efforts to get a gambling license for its Atlantic City Ritz Hotel. LeRoy broke with Hardwicke in the 1980s, blaming them for the failure of the San Francisco Plum. 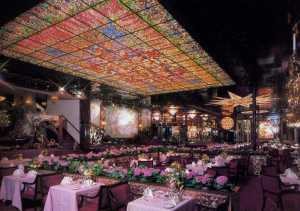 New York’s Plum did not survive the 80s. Due to changing tastes and weak reviews that a succession of chefs could not remedy, LeRoy closed it in 1988, announcing that he wasn’t having fun anymore. He sold the First Avenue building for a nifty sum, while Donald Trump plunked down $28K for one of its Tiffany glass windows. At the same auction, the Tribeca Grill acquired the Plum’s large island bar.

36 responses to “Swingin’ at Maxwell’s Plum”