As the restaurant world turned, July 17

July 17 being the anniversary of my blog, I’m celebrating. In the beginning I thought a blog would be so easy. I’d browse over my notes, grab a few things, and write a post in half an hour. Hah! That was approximately true of the first few posts — one of which I’ve revised repeatedly and another of which I’ve deleted. In memory of that happy delusion I present a quick rundown of restaurant happenings on random July 17ths.

1890 – Waiters walking off the job close down three more restaurants as they join a St. Louis waiters’ strike. The Waiters’ Union is further heartened when it learns that members of the city’s Typographical Union have pledged not to eat anywhere non-union servers are employed.

1907 – A Bangor ME restaurant worker grinding clams for chowder runs into a hard substance which turns out to be a pearl. She rejects a local jeweler’s offer of $250 ($5,000 or $6,000 today) saying she will instead send it to New York for appraisal.

1916 – Taylor’s Exchange Restaurant opens in a new building in Charleston SC promising there will be “no odors” since the kitchen is upstairs from the dining room. Taylor signs his advertisement, “I remain, Yours When Hungry.”

1930 – Despite his claims that he does not run a “booze joint” and had no idea liquor was hidden in his lunchroom’s walls, a judge fines the operator of Holyoke MA’s Washington Lunch $150.

1936 – Admitting she only took a restaurant job to escape “that darn farm” in Florida where she grew up, an Atlanta waitress announces she has won a scholarship to Louisiana State and will be quitting to study music there. 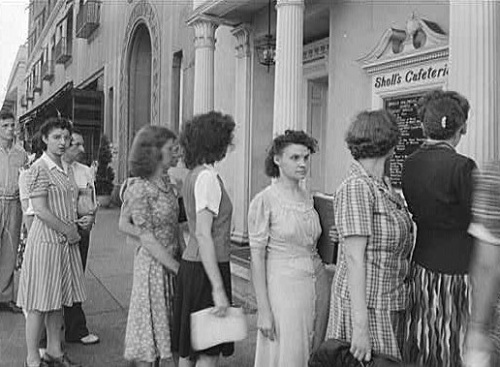 1950 – Fifteen members of the Washington, D.C. Interracial Workshop are arrested for holding up the line at Sholl’s Cafeteria after Afro-Americans in the group are denied service.

1958 – Although she has been threatened with bodily harm, Beverly Sturdevant, a manager of the Embassy Restaurant in Cicero IL, testifies against mobsters inside Local 450 of the Chicago Hotel and Restaurant Employes Union to the US Senate Rackets Investigating Committee.

1962 – “Reverse Freedom Rider” David Harris announces he will open a barbecue and chili restaurant in Hyannis MA, summer home of the Kennedys. Harris arrived a few months earlier with a busload of Afro-Americans sent North by an Arkansas segregationist Citizens’ Council. The action was meant to embarrass President John F. Kennedy, who had recently taken a harder line on segregation.