A while back I reviewed several years of a diary kept by New York City resident Josephine Sherwood Hull. Over a five-year period, 1920 until 1925, she recorded about 320 restaurant meals. This works out to a little more than one a week, which was considerable at that time. [publicity photo, ca. 1950, from movie Harvey]

I suspect her attraction to restaurants was largely explained by the fact that she was in the theater. After years of research into the history of restaurants, I’ve noticed that opera singers and theater people lived more of their lives in public than did the average American, and that included eating in restaurants frequently. Also, the 1920s was the decade that saw the number of women eating outside the home increase dramatically.

Then unmarried, Josephine Sherwood began her theater career not long after her 1899 graduation from Radcliffe College, where she had participated in amateur theatrics. In 1909 she married actor Shelley Hull and retired from legitimate theater. But after he died in 1919 – a sudden victim of the “Spanish” flu raging through the U.S. – she resumed her theater career as an actor and a director.

In 1922, 1923, and 1924 alone she directed four or more plays, and appeared in at least two others. Later she would appear in movies, often playing an older woman, frequently an aunt. She appeared in Arsenic and Old Lace, and in Harvey for which she won an Oscar in 1951 for a supporting role.

In the years of her diary that I looked at, Prohibition was in effect, and that along with greater employment of urban women during and after the war led to the flourishing of tea rooms, a type of restaurant that she favored. She went to the White Swan for dinner 24 times over the five-year period, the English Tea Room 20 times, mainly for lunch, and the Yellow Aster near her apartment on West 57th Street 12 times, again mainly for lunch. Other tea rooms she liked included the Virginia, the Thistle, the Hawaiian, and the Mirror. But despite her liking for tea rooms she rarely had afternoon tea, and when she did it was usually at hotels rather than independent tea rooms. 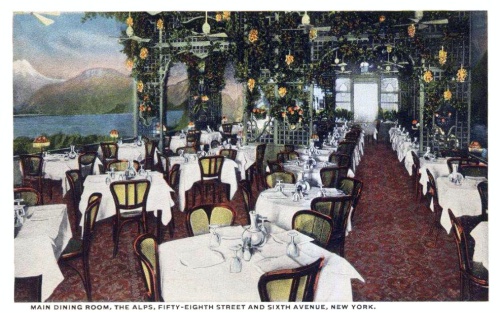 By far her most frequent meal out was dinner. She recorded eating it in restaurants 219 times. Her favorite dinner spot was a popular restaurant on 6th Avenue established in 1907 called The Alps. She also enjoyed The Hotel McAlpin, visiting their rooftop restaurant six times in warm weather. Henri’s was another favorite, as was The Tavern.

She had “supper” in restaurants 13 times, mostly in hotels. As a late night meal, supper was a favorite of theater people and others in the entertainment world. She visited a number of clubs, some of them related to theater, others emphasizing civic volunteerism.

Judging from the restaurants she patronized, except for tea rooms, she preferred places that might be described as continental, either Italian or French. For whatever reasons – perhaps reflecting her rather conservative middle-class background — there were some popular restaurants and areas of the city that she did not patronize in these years. The Automat was one. Nor did she record a single visit to a Chinese restaurant. She apparently was not attracted to Greenwich Village, a part of the city filled with tea rooms.