College and high school students of the 20th century led many eating-out trends and customs. Not only did they help make certain foods popular, they also influenced meal habits and adopted frequent restaurant-going as part of their social lives.

Drive-ins, coffee houses, and vegetarian restaurants were some of the types of eating places heavily shaped by student patrons in the middle and later decades of the last century. But a bit earlier, in the early 20th century, the eating places of choice for many college students were tea rooms that attracted women students. Not that men students didn’t also like tea rooms. An example was The Cactus Tea Room, built in 1917 with weird carvings of university types adorning its eaves, and serving both male and female students at the University of Texas in Austin.

Although tea rooms were more likely to be found near residential colleges, high school students also enjoyed them for after-school stops. In the 1920s students at Decatur High School in Decatur GA hung out at the Elite Tea Room, while Haverling High School students in Bath NY gravitated to the Chat-A-Wile Tea Room.

Rather than being stuffy and proper, many tea rooms that catered to students were relaxed and informal. They carried on college traditions such as midnight “spreads,” at which foods pilfered from the school’s dining halls were remade into chafing dish repasts. The feasts were occasions for casual attire, sprawling on the floor, and high spirits at the thought of evading detection while breaking college rules. [shown here is an Oberlin College dorm room spread, 1905]

Tea rooms also carried on the tradition of college dining clubs, which involved groups of friends joining together to hire a local woman to prepare their meals. The clubs adopted humorous names such as Vassar College’s Nine Nimble Nibblers, Grubbers, and Gobbling Goops of the late 19th century. 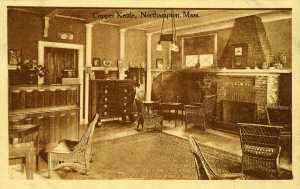 For example, a popular spot for students from Smith College was the Copper Kettle, which played a role much like the coffee shops of today. Students hung out there, read, chatted, and snacked on popcorn, ice cream, and tea. Its decor was cosy, shabby-chic style with mismatched furniture, wicker lounge chairs, posters, and window seats. Smith students were also enamored of the Rose Tree Inn, where full meals were served in a Bohemian atmosphere created by the intriguing Madame Anna de Naucaze.

Some colleges were almost surrounded by tea rooms. That was true in Western Massachusetts where both Smith College and Mount Holyoke College are located. Northampton, home of Smith College, was described in 1922 as having “more tea-houses than churches.” Not so far away, Mount Holyoke College was also well supplied with tea rooms, among them The Croysdale Inn, The Mary-Elin Tea Shop, and The Art Nook. I find it interesting that the Mary-Elin advertised in 1921 that it would stay open until 10 p.m., which was quite late for a tea room.

Parents did not always approve of their free-wheeling daughters’ behavior. In 1912, a mother wrote a critical article titled “One Disintegrant of Our Home Life,” about the typical college girl who socialized constantly, ignored rules of proper dress, and loved going to “the Green Coffee Pot or the Carnation Tea Urn.” “I tell my husband that college doesn’t breed home-building girls,” she wrote.

Among the most notable changes that tea rooms brought was simply that of providing a welcoming and friendly place for unescorted women to gather. This, of course, encouraged women and girls to spend more time eating away from home.

As for food, apart from popularizing eating cake and ice cream at any time of day or night, tea room food was a departure from typical lunch rooms and restaurants of the early 20th century that served fairly heavy meals based around meat. Although meat was certainly served in tea rooms, patrons also had many other choices. A 1920s menu from The Quinby Inn (shown above) — popular with students at Goucher College near Baltimore — offers Tenderloin Steak and Roast Pork, but also many other choices, with quite a few of them revealing the popularity of sweet food. Among them are 12 desserts, 22 salads, many of which involved mixed fruits and whipped cream, and 22 sandwiches, including Olive & Egg and Sliced Pineapple (no, not together!).

A number of college women opened tea rooms of their own either as a summer project or after graduation. But that will be another post.

In 1908 two women adventurers opened The Rose Tree Inn, a tea room in a 200-year old house in Northampton, Massachusetts. Both called themselves “Madame” and claimed to be related to European nobility by birth or marriage. They were used to supporting themselves and living by their wits. One, Anna [pictured], a widow, was a former British stage actress, while the other, Marie, who had an 11-year old son, was married to a criminally inclined soldier of fortune who masqueraded as a German baron and was exiled to a British penal colony.

Each had arrived in New York City from London in 1907 to cover the sensational Harry Thaw murder trial for British papers. Almost immediately they became involved in what might be termed attempted “capers.” Madame Anna de Naucaze, 52, claimed she knew the secret to winning at roulette and could prove it if only someone would back her at Monte Carlo, while Madame Marie von Veltheim, about 38, said she had a treasure map showing where $4 million in gold was buried in mountains in South Africa’s Transvaal.

Next they got in trouble with the courts for misappropriating a photo album that was evidence in the Thaw trial. The album contained photographs of Thaw’s wife Evelyn Nesbit who had been having an affair with Thaw’s victim, architect Stanford White. With a possible charge of larceny hanging over them, Anna returned the album to Thaw’s lawyer.

And then they went to Northampton. By comparison with their pasts, the small college town must have seemed dull. It’s not clear what drew them there, though if they were looking for a way to make money, they found it. The RTI, as it was known by its primary patrons, Smith College students, became a very popular place known for its sumptuous desserts and continental, “bohemian” atmosphere. Marie, who claimed to be the inn’s originator, stayed around until about 1913 when, after looking for a location for a new tea room, she evidently left for New York to “save her husband.”

Anna ran the tea room for the next 10 years, catering to students from Smith, Amherst College, and the Massachusetts Agricultural College. She took out advertisements as far away as Yale and also entertained visitors from her stage and literary past. She did well enough to warrant additions to the inn, one a screened-in section known as “the bird cage.” She opened two annexes in town, the Rose Tree Hut and the Rose Tree Den. At some point there was also a summer branch of the RTI in Old Orchard, Maine.

In addition to the attractions of delicious food and the quaint house with its old world charm, everyone was intrigued with the eccentric person of Anna herself, particularly because her gender was ambiguous. She dressed like a man and seemed mysterious. As one student put it, “Some say she is fleeing from justice, that she married a Frenchman and were greatly in debt so left France and came to America.” She was reported at various times to have been born in France, Belgium, and Russia. For several years she published a magazine called “4 All,” and she occasionally appeared in local theater productions. She was also known for writing her own humorous and folksy advertising copy, such as, “If you descend in an aëroplane we will be ready for you, but we much prefer to have you telephone.” According to a 1915 story about her, after business hours she spent evenings “alone with her dog and her revolver.”

In the early 1920s Anna fell afoul of Smith’s good graces over issues such as the inn’s cleanliness and reports that Smith students were smoking, and maybe drinking and meeting boys there. In 1923, when the college still had the power to control which off-campus restaurants students could patronize, the RTI was removed from the approved list. The RTI could not go on and, at age 69, Anna was deprived of her income. She lived in Maryland for a while but died in NYC in 1924. For many years later the building was occupied by the Rose Tree Filling Station.