I haven’t found evidence that people celebrated New Year’s Eve in restaurants or hotels much in the 19th century. But in the early 20th century it became a more popular thing to do. Having a reservation at a swanky place conferred status, as the 1912 drawing above is meant to illustrate.

If one dish ruled New Year’s Eve menus in the early 20th century it was roast turkey. It was the main dish at the Techau Tavern, “San Francisco’s Busiest and Handsomest High-Class Café,” shown here in 1909. Turkey with Cranberry Dressing and Chestnut Stuffing was preceded by Toke Point Oysters from Washington, Cream of Chicken Soup, Striped Bass, and Sweetbreads.

Turkey also dominated the 1912 New Year’s Eve menu at The Fern in Scranton PA, “An Eating Place of Refinement and Respectability.” The Fern featured a $1 dinner that was similar but even heftier than the Techau Tavern’s, with Blue Point Oysters, Cream of Chicken Soup, Baked Bluefish, Croustade of Lobster, Tenderloins of Beef, Roast Turkey, Sweetbreads, Banana Fritters, as well as all kinds of vegetables, salad, and pie. The Alt Heidelberg Café in Fort Wayne IN, and Tait’s in San Francisco provided similar menus.

Through the 1920s, it was not hard to find a place where one dollar or a little more would buy an elaborate dinner with an orchestra and dancing. In Seattle WA, New Year’s Eve entertainment at the Hotel Washington Annex included dinner plus a “lady vocalist” and the Whangdoodle Quartet, all for $1.25. The absence of (legal) alcohol in the 1920s did not dim festivities in Chicago nightspots in the Loop or on the South Side, where “handling a flask has never been considered flagrant.”

Despite tight economic times in the 1930s and war in the 1940s – or maybe because of these conditions — Americans showed continuing enthusiasm for celebrating the new year in restaurants and clubs. The repeal of Prohibition at the end of 1933 brought about heightened levels of good cheer. Not even higher prices at the end of 1934 discouraged revelers who paid from $7.50 to $15 per plate in NYC. Yet there were still bargains to be had as the accompanying 1935 menu from Kolb’s in New Orleans shows. Low prices also prevailed in Canton OH where sauerkraut and wieners were traditional. 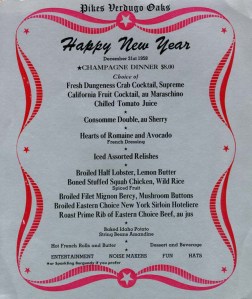 After the war, menus reflected the growing importance of beef on New Year’s Eve – and throughout the year. The 1958 menu at Pike’s Verdugo Oaks in Glendale CA is representative, and not terribly different than menus found throughout the U.S. in later decades. The Raintree Room at the Continental Regency in Peoria IL in 1978, for example, offered beef or lobster, with salad, baked potato or french fries, and the ubiquitous cheesecake for dessert, a standard menu for a restaurant dinner in the last decades of the 20th century.

Whether you have steak or hot dogs this New Year’s Eve, have a good time and best wishes for 2018!

The history of Thanksgiving is much more interesting than the mythical Pilgrims and Indians tale we all learned in grade school, even though restaurants actually have played only a small part.

For much of the 19th century Thanksgiving was considered a predominantly Yankee holiday, which to Southerners implied domination by the North, particularly when Abraham Lincoln declared Thanksgiving a national holiday in 1863 to honor the Union victory at Gettysburg.

Previously, Thanksgiving holidays were proclaimed by governors, who also set the date each year. In 1815, however, President James Madison declared a Thanksgiving Day to celebrate peace with England. Still, it retained strong association with New England and a Thanksgiving dinner in Philadelphia that year was composed of New Englanders “got up in Yankee style, and finished with a compliment of Yankee toasts and hymns.” In 1821 a state outside New England, New York, officially recognized the holiday.

Thanksgiving spread slowly in the 1820s and 1830s. By 1839 the holiday was celebrated in Connecticut, Maine, Massachusetts, Michigan, New Jersey, New York, and Rhode Island. Homecoming was a popular theme, especially in Massachusetts where abandonment of rocky farms was a growing trend. By 1858 it was reported that in New York City alone at least 10,000 New Englanders had returned home for Thanksgiving. 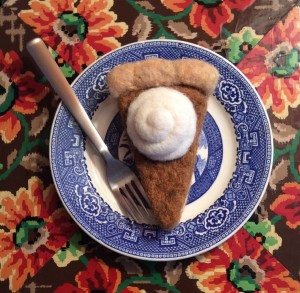 The holiday spread faster in the 1840s and 1850s. The New York Times reported that by 1859 all the Eastern and middle Atlantic states, and the Western territories, plus five Southern states celebrated Thanksgiving.

But the spread was uneven. Although the governor of Missouri proclaimed a day of Thanksgiving in 1843, it was observed only seven times over the next 20 years, and many citizens of that state knew nothing of Thanksgiving until after the Civil War, despite President Abraham Lincoln’s 1863 proclamation declaring Thanksgiving a national holiday to occur on the last Thursday in November.

So, although by 1890 Thanksgiving was officially recognized by 42 of 44 states and territories then part of the United States, it is unlikely that people of all regions, social classes, and religions celebrated it to an equal degree.

According to historian Elizabeth Pleck (“The Making of the Domestic Occasion: The History of Thanksgiving in the United States,” Journal of Social History, Summer 1999), many working class men regarded Thanksgiving as a holiday like any other, that is, a time to drink, parade noisily through the streets, and demand treats from the gentry. In 1859 the board of aldermen of the District of Columbia refused to set a date for Thanksgiving because it had become an occasion for widespread lawbreaking. In the late 19th century the rowdiness tradition was channeled into Thanksgiving Day football matches. In the West, Pleck writes, Thanksgiving dinner tended to be  simple and the day largely devoted to hunting. 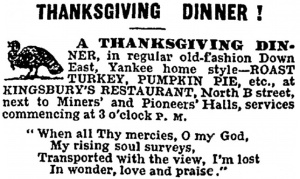 Nor was it a big restaurant day in the 19th century, though I have found a few advertisements for Thanksgiving dinner in the 1850s, and more after Lincoln’s proclamation [above, menu from Virginia City NV restaurant, 1874]. Restaurants also supplied cooked food to homes and catered philanthropic dinners for the needy. Edmund Hill, a New Jersey restaurateur and caterer, wrote in his diary: Thanksgiving, Thursday 30. 1882: Busy sending out orders all the morning. – Closed store at noon. Dinner at two. Mother improving, for which we give thanks. – We furnished a newsboys’ dinner – fifty at the reading rooms. The Trenton Times paid for it. Lots of fun.”

Pleck suspects that “Thanksgiving celebration was most common among the middle and upper classes in New England and the middle-Atlantic states, and among Protestants.” The job of integrating everybody else was a task for late-19th-and-early-20th-century patriotic societies, public schools, and popular magazines. Immigrants were subtly encouraged to see themselves as modern-day Pilgrims being welcomed by the natives. The strategy worked.