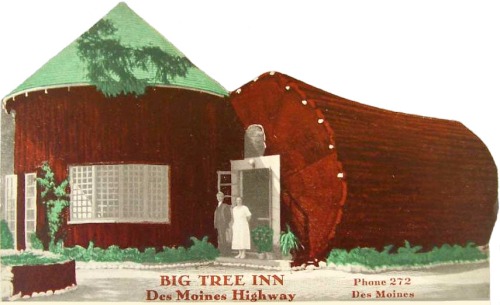 Was there ever a building or structure so strange, so awkward, so ugly that no one yearned to turn it into a restaurant?

Chicken coop, stable, giant tree stump. Why not? Especially if it was likely to catch the eye of speeding motorists and get them to stop out of sheer curiosity if nothing else. 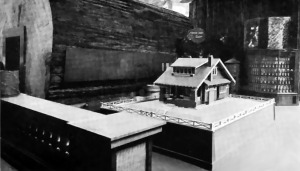 That’s not to say that the Big Tree Inn, for instance, had nothing to recommend it but its oddness, but it certainly had plenty of that. Built from two sections of a redwood log it was designed to exhibit Humboldt County CA’s wood products at the 1915 Panama-Pacific International Exposition.

The stump house, 20 ft in diameter, plus its associated log structure, was contrived by the Rodney Burns Redwood Novelty Co. and shipped by rail in sections to San Francisco where it was reassembled.

Following the exposition, a realtor in Washington state bought the log structure, transporting it to Des Moines WA at great cost. Then he added a kitchen and dining room. The odd building quickly proved a great attraction to gawkers.

The realtor’s intentions in buying the two-part building are unclear – if he had hoped to make money from the redwood structure he was evidently disappointed. For several years the property languished among the real estate listings even though it was described as “very desirable for a chicken dinner place.”

Finally, in 1923 a couple from Seattle, middle-aged and recently married Andrew and Katherine Swanson, bought the Big Tree Inn. Andrew was a bookbinder, an occupation with no seeming suitability for operating a restaurant. Katherine, however, had worked as a cook. 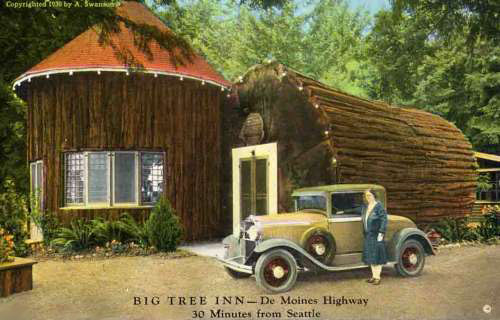 The two managed to make a success of the venture, running it as a seasonal business for 20 years. A 1930 postcard shows Katherine standing in front of the Big Tree with her new Oldsmobile.

It was a popular destination for parties of city dwellers wanting chicken or steak dinners – or other dishes listed on the menu shown above such as Minced Ham and Pickle Sandwiches. In 1925 a Seattle newspaper advertised the Big Tree as “The Most Unique and Attractive Summer Resort in Washington” – On Des Moines Highway – Family Chicken Dinner, $2.00 – Special ½ Fried Chicken, on Toast, 50c. Not necessary to phone. We are always ready to serve.”

The Big Tree Inn’s location on a heavily traveled highway between Seattle and Tacoma was essential to its success, so when the highway was rerouted in 1938 the Big Tree Inn followed. The Swansons sold it in 1944. The building survived a bad fire in 1946 and was back on the market five years later, described as a “summer gold mine on main hiway” that was “ideal [for] couple management.” What happened to it after that I don’t know.