Find of the day: the Double R Coffee House 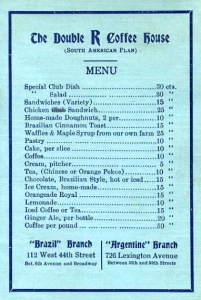 It gets harder and harder to turn up anything interesting at flea markets – even on the sprawling fields of Brimfield. But luck was with me this past week when I found the little menu from The Double R Coffee House.

It didn’t look terribly interesting in itself until I remembered that my restaurant collection contained a cartoon-style postcard with the same name that I especially liked.

Turns out that the two Double R Coffee Houses had an interesting history. They were established and funded by sons, daughters, cousins, and others related by blood or marriage to Theodore Roosevelt. The impetus for the coffee houses came from Theodore’s son Kermit, who had spent time in South America and Arab countries. He mentions coffee repeatedly in his book War in the Garden of Eden. The book describes his experiences while serving with the British forces in Iraq and other countries involved in the Mesopotamian Campaign of World War I.

The initial business incorporation in 1919 was called Café Paulista after a café in Buenos Aires that Kermit had frequented years before. The corporation launched the first coffee house, then located at 108 West 44th Street, calling it The Brazilian Coffee House as inscribed above the door in this 1919 photo.

The coffee house got a fair amount of press due to the Roosevelt connection, but the family did not involve themselves in running it, nor were they known to frequent it. However, in one instance President Roosevelt’s widow did visit the 44th street location. A widely publicized news story in 1923 told of how she had saved two oil paintings of her late husband when a minor fire broke out in the kitchen. 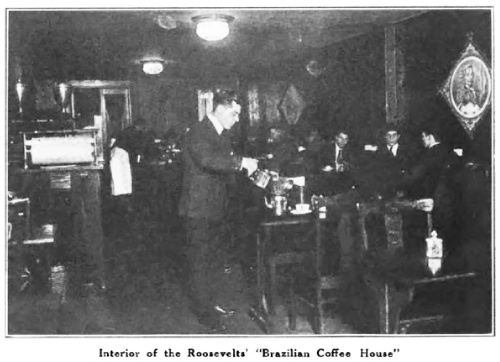 What was truly unusual about the coffee house was not so much its owners or its decor, but how serious it was about coffee. The manager, Brazilian Alfredo Salazar [shown above], declared it was not a restaurant. Although it served light food including empenadas, he insisted the focus was on serving “real” coffee. He declared that Americans, New Yorkers included, did not know how to roast, grind, brew, or for that matter, drink coffee. Coffee that was boiled or percolated and left to sit around for over 30 minutes was equivalent to “tannic acid soup” in his estimation. He advised drinking it black, but allowed that the coffee house would provide cream, milk, and sugar since it was not a “propaganda establishment.”

The coffee house roasted coffee beans on the site and everyone commented on the wonderful aroma this produced.

Shortly after opening, the 44th Street coffee house moved to larger quarters nearby at #112. It was popular from the start, particularly with Brazilians, American business men – and business women — as well as surrounding theater-district performers.

Another characteristic of the coffee house that was appreciated was that patrons could linger as long as they liked, even if they ordered very little. Imprinted stationery was provided along with some reading materials – including an abridged version of the U.S. Constitution — and the place soon extended its hours to 1 a.m.

In February of 1921 the name was changed to Double R Coffee House due to a conflict with another business claiming that name and also because a cousin named Robinson was the corporation’s new president. In May a second coffee house on Lexington was opened with an exhibit of paintings by members of the Art Students League curated by realist painter John Sloan. Because of the art connection, it seems as though this coffee house had a more bohemian aspect. In a letter to Chicago poet and editor of Poetry Magazine Harriet Monroe, poet Wallace Stevens wrote that he had visited the new coffee house in August and “had a dash of maté.”

In 1923 there was talk of opening another Double R on 45th street in Times Square, but I could find no trace of it. Vague ideas about expanding to Boston, Philadelphia, and Chicago, talked about in 1919, never materialized and in 1928 one or both of the coffee houses were sold to new owners. What happened after that is unknown.