Despite a cloud of confusion surrounding the history of the St. Paul sandwich, I think I can add some interesting dimensions to the story.

For a long time it hasn’t been clear where the sandwich came from or even exactly what it is.

In recent decades St. Louis has claimed the St. Paul as its own, even though most St. Louisans probably never ate one. Supposedly it cannot be found in its namesake city of St. Paul (Minnesota), where it is said no one ever heard of it.

It’s not entirely certain how – or if – it is different from a Denver or a Western sandwich. One thing is certain: It’s an egg sandwich, based either on an omelet or egg foo yong. The sandwich would also have some combination of the following ingredients: chopped onion, chopped green pepper, tomato slice, lettuce, dill pickle chip, parsley, scallions, mushrooms, mayonnaise, chopped beef, chopped ham, deviled ham, sliced chicken, pork, shrimp, or crab.

The St. Louis version, found in unpretentious Chinese chop suey restaurants, consists of egg foo yong with mayonnaise on white bread, with the possible addition of a tomato slice, dill pickle chip, and lettuce. Its unlikely combinations make it ripe for ridicule. And, yet, . . . despite its utter failure to satisfy health or authenticity standards, its critics seem to agree that it tastes quite good.

Accounts of the sandwich’s history often cite Chinese cooks who provided food for Western railroad construction workers in the mid-19th century. The story goes that the cooks improvised the sandwich with what they had on hand, including egg foo yong.

A 2006 story in the St. Louis Riverfront Times attributes the city’s St. Paul sandwich to a St. Louis Chinese restaurant operator of the 1970s who named it for his home town of St. Paul MN. 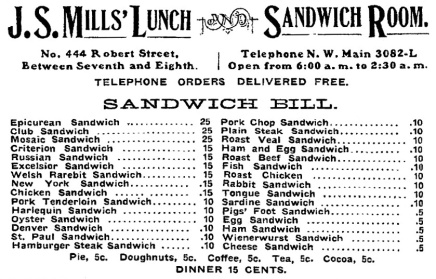 After a lot of looking, I found the sandwich on a St. Paul MN menu in 1904. In an advertisement it is referred to as “the new and popular St. Paul sandwich.” Along with many other puzzling sandwich names, the Mills Lunch and Sandwich Room offered both a St. Paul sandwich and a Denver sandwich, indicating they were not the same thing as is sometimes argued. That same year lunch wagons in Kansas City MO were selling St. Paul sandwiches described as chopped ham, chopped egg, and onions. They also offered a Minneapolis sandwich made of chopped ham and chopped egg, but without the onions. The St. Paul also turned up in Ottawa KS in 1913 and in 1915 at a restaurant in Columbia MO popular with students at the University of Missouri.

In 1916 and again in 1933 a St. Louis newspaper published recipes for the St. Paul sandwich, which showed no connection with egg foo yong. In both recipes the sandwich was made with scrambled eggs, chopped ham, and onions and parsley.

Evidently the St. Paul was known in the East also. In 1933 a NYC paper ran a short story on how artists were making a living in the Depression. One painter was also a short order cook whose specialty was making St. Paul sandwiches. 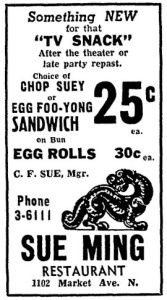 The earliest connection with a Chinese restaurant I’ve found was in Minneapolis, run by Woo Yee Sing but popularly referred to as John’s Place. In 1937, a newspaper column recommended the restaurant’s “Egg Foo Yung sandwich” served with French fries, beverage, and dessert for 40c. How long the restaurant, established in 1905, had been serving that sandwich is unknown. The fact that it was not called a St. Paul sandwich is not too surprising since a Denver sandwich was called a Denver in Chicago but a Western in Denver.

By the 1940s and 1950s St. Paul sandwiches could be found in many places, including Seattle WA, Amarillo TX, and Greensboro NC, though exactly what they consisted of is obscure. Finding Chinese restaurants advertising them is harder, though I did find one in Canton OH in 1954 which referred to the sandwich as Egg Foo Yong [Sue Ming, shown above]. I find it interesting that the restaurant also advertised a Chop Suey sandwich. According to Haiming Liu (From Canton Restaurant to Panda Express), its cousin, the Chow Mein sandwich, became popular in Southeastern Massachusetts and Rhode Island in the 1930s.

If you like stories about odd sandwiches, see the amusing PBS documentary Sandwiches That You Will Like.