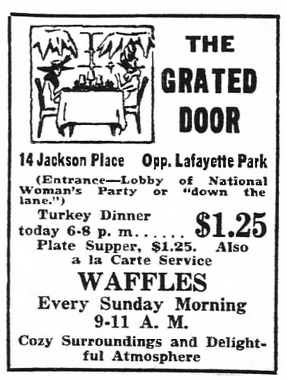 In roughly the ten years preceding passage of the 19th amendment giving women the vote in 1920, suffragists ran tea rooms and lunch rooms to raise funds for the cause and to publicize their arguments for why women should have the right to vote.

Most major cities – New York, Boston, Baltimore, Hartford, Charleston, Atlanta, D.C. [see above illustration], etc. – had a suffrage tea or lunch room, many located in the local suffrage headquarters. In smaller towns they might be temporary, running only for a week or so in order to get money for something such as sending a delegate to a meeting out of town. There were other related ways to make money: in San Francisco suffragists sold a specially packaged Equality Tea, with a booth in the Emporium department store. 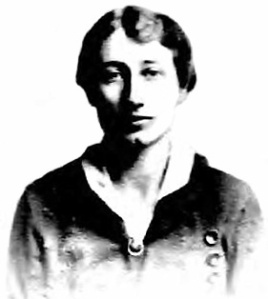 Some groups served only tea but in larger cities tea and lunch rooms also provided food. When a suffrage tea room opened in Chicago in 1914, it offered a variety of salads and sandwiches with a beverage for 35 cents. Desserts could be added for another 15 cents, but evidently pie a la mode was reserved for male guests. Men were warmly invited to patronize suffrage tea and lunch rooms, and treated very well, since they would be the ones deciding whether women would get the vote. Lifelong peace activist Mildred Scott Olmsted [shown here at age 29], interviewed at age 97, said she had been a volunteer waitress at Philadelphia’s suffrage tea room, where they “lured men in for a good cheap business lunch.” “Then,” she said, “you could hand them literature and talk.” No doubt she did a lot of talking. Over and over she heard the argument that women should rely on husbands, fathers, and brothers to vote for them. 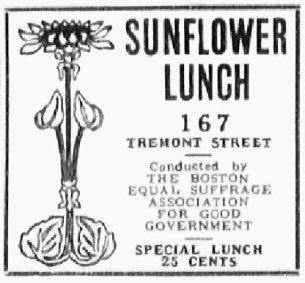 At Boston’s suffrage lunch room on Tremont Street [shown below] substantial meals were available, such as corned beef hash with beets and a muffin or boiled salmon with egg sauce and potatoes, both for about 30 cents. The back of the menu was used to inform diners that if the lunch room succeeded in adding another 40 daily patrons to its usual 160, it would make enough profit to cover its office rent. Yellow was the color most often associated with the suffrage cause, explaining the Sunflower name adopted by the Boston suffragists. 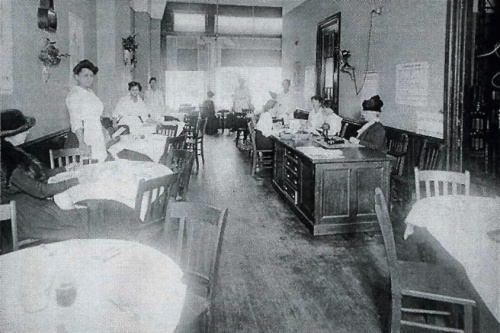 Undoubtedly, the most eye-catching of the pro-suffrage tea and food dispensaries was the yellow and black lunch wagon that showed up in the Bronx near Fordham College in the summer of 1911. Suffrage volunteers worked in it, selling lemonade and sandwiches. The plan was to have one wagon in each of the five boroughs; one showed up in Brooklyn in 1915, though I couldn’t determine if there were others.

The lunch wagon was only one of New York’s suffrage eating places. At 70 Wall Street was the Votes for Women lunch room run by the Empire State Suffrage Campaign Committee, in a space donated by the husband of one of the suffragists. When a promise of homemade food was made on September 16, 1915, the place was mobbed, with men crowding the tables and “against the walls.” A menu published later promised “Real Home Cooking,” featuring Chicken Salad, Corn Bread, Waffles with Real Maple Syrup, and Home-made Ice Cream.

The offer of “homemade” food was politically strategic in that it reinforced the idea that suffragists were feminine women, not pseudo men as argued by the anti-suffragists. Using the same logic a suffrage group in Washington state put out a cookbook with 700 recipes. [1917 ad for Philadelphia’s lunch room show here]

Multi-millionaire Alva Belmont financed another New York City suffrage lunch room on East 41st street, at the headquarters of her Political Equality League. There middle-class women who could afford to spend 50 cents for lunch ate in one room, while working-class women ate inexpensive sandwiches in a second room.

Along with suffrage groups, probably every city also had an organization of women opposed to equal suffrage. They also tried to gain support through teas and lunches, though these tended to be occasional events held at the antis’ headquarters or in someone’s home. In February 1917, the District of Columbia Association Opposed to Woman Suffrage, for instance, created a pink tea room – pink being the antis’ color — at their Pennsylvania Avenue offices for visitors attending the inauguration of Woodrow Wilson. In Des Moines IA, the local anti-suffrage association held a tea reception at Younker’s Department Store to host a prominent anti-suffragist from Pennsylvania.

Just how helpful suffrage eating places were in boosting the cause is impossible to assess, but they surely must have helped build bonds among feminist activists such as Mildred Olmsted.