Ham & eggs by any other name

Usually I avoid topics that others have written about repeatedly. The origin of Eggs Benedict is certainly one of those.

I have a problem with origin stories in general because usually they are too neat. But that’s not actually true of Eggs Benedict (a poached egg and ham slice on a toasted English muffin with Hollandaise sauce poured over). The stories about how it appeared in the 1890s are contradictory. There are variations about who it is named after and which famous, usually New York, restaurant produced it first. Among the contending dining spots are Delmonico, the Waldorf-Astoria, and Sherry’s. Of course for an origin story to work, it almost has to involve a well-known, prestigious person/place.

An essay from American Food by Rachel Wharton discusses the numerous conflicting reports of the dish’s origin. It concludes with “Maybe it doesn’t matter who the first Benedict really was. The real point, as has been said by many others in the past, is that this was a rich dish devised for rich people . . .”

With all the butter and egg yolks in Hollandaise sauce, it is certainly a rich dish but was it really devised for “rich people”? That would be, of course, another significant factor in giving the dish panache.

My version of the dish’s fame doesn’t focus on its origin but on its later status and how it became well known long after the 1890s. I suspected that Eggs Benedict was marketed as having an elite past so that it could become a “special” dish. Is it necessary to say that a restaurant could charge more for Eggs Benedict than they could for ham and eggs – and use less ham to boot?

The early days of Eggs Benedict do not seem to have been especially glamorous. At the start of the 20th century the recipe for the dish was featured in newspapers’ “women’s pages.” It seems it was more of a home dish than a restaurant dish. A 1906 woman’s column deplored the food served by society women and wished they would instead serve things such as good old scrapple, mincemeat pie, or Eggs Benedict. During World War I Eggs Benedict appeared on menus as a patriotic meat-conserving dish. A low point in its glamorousness may have occurred in the 1920s when a Beaumont TX newspaper recommended a casserole of baked tomato on toast with cheese sauce and breadcrumbs as “a nice change from eggs Benedict.”

When Eggs Benedict was listed on restaurant and hotel menus in the teens and 1920s it was usually as a breakfast or lunch entree. An early example was at a Boston restaurant that featured luncheon specials in a 1915 advertisement [shown here]. As can be seen below, Du Pont of Paris was a white tablecloth restaurant, certainly fancier than the average working men’s lunch room but a long way from the deluxe world of the Waldorf. 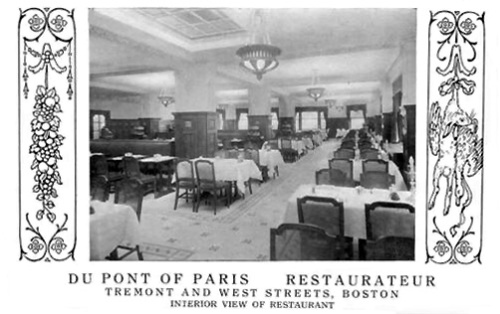 The dish’s fame and fortune began to rise after World War II when the middle class grew larger and more people began to go to restaurants for recreation. In 1946 the New York columnist Gaynor Maddox introduced readers to a creation tale of Eggs Benedict which had a hungover Waldorf guest coming to breakfast in 1894 and asking for toast, bacon, two poached eggs, and a pitcher of Hollandaise. The famed Waldorf host, Oscar, came into the story too, by later substituting ham and English muffin for the bacon and toast.

A year after Maddox’s column, the dish appeared on the brunch menu of San Francisco’s Fairmont Hotel for the high price of $2.50 (the average daily gross income in 1947 was about $12).

Its reputation continued to be burnished by others. Chef Pierre Franey retold the Waldorf origin tale, while Duncan Hines had it coming from France via New Orleans. Chef Louis Szathmary credited a wealthy Bostonian and a chef at the Ritz Carlton. But all seemed to agree it was indeed a ritzy dish.

For some reason – maybe to make Eggs Benedict sound even ritzier – some restaurants renamed it Eggs Benedictine. They were probably unaware that Benedictine refers to an entirely different egg dish of the almost 500 egg recipes that have been recorded. It is a poached egg on a puree of salt codfish with cream sauce and truffles.

Even though it had formerly been served mainly for lunch or supper, Eggs Benedict found its true calling in the 1960s and 1970s, when it became the classic brunch order. [Molly Maguire’s, 1977, New Orleans] Perfect for Mother’s Day and best accompanied by a glass of champagne followed by Crepes Suzette.