I have a weak spot for corny roadside attractions, such as the scaled down lighthouse in front of The Gables restaurant in South Deerfield, Massachusetts, pictured here on a matchbook cover. The first time I saw it a while ago I wondered why it was there, and what the story was about the little commercial complex that appeared to be a bit down and out at that time.

And now I know – sort of. The lighthouse and its connected cottage were a gas station, while the main building was run as a roadside lunch spot when it began in business. Combination gas station/lunch rooms became commonplace in the 1920s and 1930s when more and more people began taking recreational drives through the countryside.

Exactly when the twin businesses were launched remains a question. My guess is the late 1920s, definitely by 1930, at which time they were operated by Charles M. Savage. He had long been a co-owner/manager of the Hotel Lathrop in South Deerfield, which was sold in 1928. 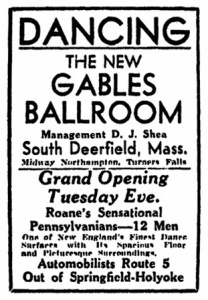 In 1931 a local builder completed a large building next door, south of The Gables. Oddly enough, it was intended as an indoor golf course, but instead was run as a dance hall by Dennis Shea, owner of the Shea Theater in Turners Falls, and later by a succession of others. Rudy Vallee and other nationally known acts performed there. In the 1950s it became a roller rink and then, in the 1970s, an auction house [pictured below as it looks now]. During its tenure as a dance hall and roller rink it was also known as The Gables, just like the restaurant (to confuse future researchers I’m sure!).

At the time the matchbook shown above was produced, The Gables restaurant was conducted by William Wade who also ran the Wade Inn on State Street in Northampton MA.

By 1936, The Gables restaurant had passed into the hands of Edward J. Chicky, also of Northampton. If the illustration in the advertisement from 1939 is accurate, the building had been extended on the left by then. It was now known as The Gables Food Shop, “food shop” being a popular name for a restaurant at the time.

After Chicky, it was owned by others, including Guido “Guy” Zanone, previously proprietor of the Bernardston Inn, who bought it in 1941 [see above], then Frank and Veronica Shlosser in 1946. The Shlossers built a new, larger restaurant across the street in 1955, advertising in 1956 that it had colonial atmosphere and facilities for 350. It was a popular place for wedding receptions, club lunches, and business organization meetings. 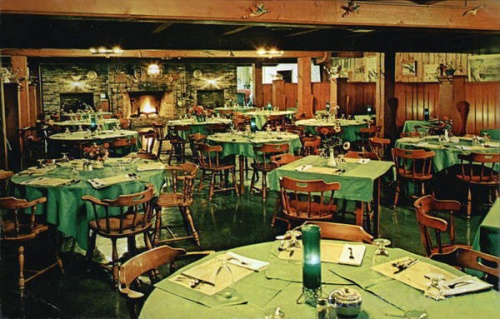 The Shlossers continued to run the new place shown above until the early 1970s, when it was sold. It stayed in business as a restaurant and banquet house through most of the 1980s, serving beef, seafood, and chicken parmesan, among other dishes. Today it serves as housing for faculty and staff at Deerfield Academy.

Recently the original Gables has gone on the market once again. I wish someone would reopen it as a 1940s film-noirish roadhouse.

Thanks to Historic Deerfield librarian David Bosse for helping to clear up an area of confusion in my research. 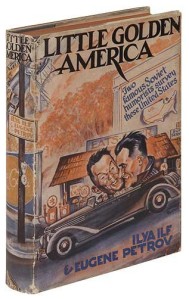 Not that they found American restaurants especially funny.

Au contraire. On their car trip across the continent in 1935/1936 writers Ilya Ilf and Eugene Petrov, billed as “Soviet Mark Twains,” observed what they regarded a nation of joyless folks who ate tasteless food in restaurants designed for speed and efficiency. As they put it, “The process of eating was just as superbly rationalized as the production of automobiles or of typewriters.”

The acme of rationalization in their opinion was the Automat where a wall of metal and glass boxes filled with sandwiches and pie separated customers from staff. They preferred the Childs restaurant chain with table service. “At Childs one receives the same clean handsome food as in a cafeteria or an automat. Only there one is not deprived of the small satisfaction of looking at a menu, saying, ‘H’m,’ asking the waitress whether the veal is good, and receiving the answer: ‘Yes, sir!’” 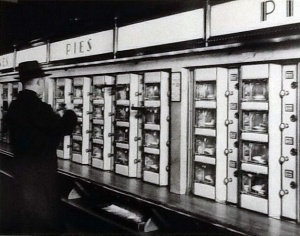 They did not visit luxury restaurants, preferring commonplace eateries where average Americans ate, such as cafeterias, drug store lunch counters, and roadside “dine & dance” halls. They also went to a football game, an Indian reservation, and other quintessentially American sites and events that they described in a book published in the Soviet Union, and then translated for Americans as Little Golden America (Farrar & Rinehart, 1937).

In Chapter 4 (Appetite Departs While Eating) they asked, “How does it happen that the richest country in the world, a country of grain growers and cattle raisers, of gold and remarkable industry, a country which has sufficient resources to create a paradise, cannot give the people tasty bread, fresh meat, real butter, and ripe tomatoes?” Not surprisingly, as dedicated socialists they located the cause of the problem in capitalism which reaped higher profits in shipping frozen beef and unripened California tomatoes cross country than in local food production.

By contrast, they cited Soviet Commissar of Food Anastos Mikoyan who was at that time spearheading a Stalinist reform campaign of joyous eating and champagne for everyone to replace the habitual diet of cabbage soup and mush. Mikoyan’s office produced a landmark cookbook with color photos of cosmopolitan meals (The Book of Tasty and Healthy Food, 1939). Sitting in an American cafeteria in 1935, Ilf and Petrov felt that a Mikoyan speech that declared food in a socialist country must bring joy to its eaters “sounded like poetry to us.” But the truth was that Soviet leaders, Mikoyan included, were admirers of the U.S. rationalized system of production, including its food.

During their American travels Ilf and Petrov learned to drink tomato juice – well-peppered to their taste — as an appetizer, but could not adjust to eating melon before dinner, despite its “place of honor among American hors d’oeuvres.” 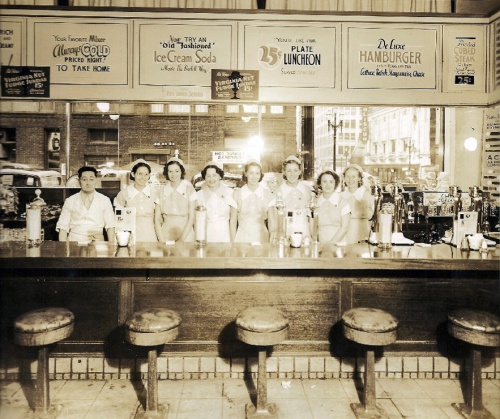 They frequently made fun of drugstore meals that were numbered #1, #2, etc., and whose prices were based solely on quantity. “If in Dinner #2 a course called ‘country sausage’ consists of three chopped off sausages, then in Dinner #4 there will be six chopped off sausages, but the taste will be exactly the same.” When they ate at Bernstein’s fish restaurant in San Francisco, they were happy that the dinner there made up for that day’s drugstore lunch #3.

Seriously, why did they keep eating in drug stores, especially in a city of restaurants such as San Francisco? They could have tried Chinese food, or gone to a tea room or any number of places. 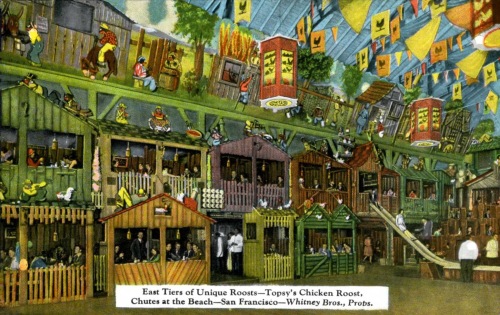 In my opinion they hit bottom when they visited a palace of fun outside San Francisco known as Topsy’s Roost, a “dine and dance” joint whose corny racist theme was based on shacks, pickaninnies, and fried chicken. Were their Soviet readers envious when they read, “For fifty cents [a man of moderate means] gets a portion of chicken, and, having eaten it, dances until he is on the verge of collapsing. After he is tired of dancing, he and his girl . . . ride down a polished wooden chute placed in the hall especially for entertainment-seeking chicken eaters.”

The book was said to be popular in Russia. I’d love to know what readers thought about America after reading it.