Restaurants in the family: Doris Day

I’ve often been struck by how many American families have some relationship to restaurants other than as patrons. It’s not at all unusual to have a family member who has worked for a restaurant or has owned one.

Reading the lengthy obituary for Doris Day in the NY Times this week I discovered this was true for her also. Both her father and one of her husbands worked in or owned restaurants and related businesses.

For most of his life her father, William J. Kappelhoff, had a career in music, whether as a church organist, piano teacher, or choral director in Cincinnati where Doris and her family lived. But by the late 1950s he was operating a place in Cincinnati called the Mound Café, and in 1960 he owned the Melburn Bar. Exactly what was served in either place is unclear but, like many taverns, their menus may have included light food along with drinks.

Kappelhoff divorced Doris’ mother in 1935 and then married the woman he had been having an affair with when Doris was growing up. After his second wife died he married his tavern manager, Luvenia Bennett, in 1961. Because he was Doris Day’s father, and was white, the fact that his new wife was a Black woman was considered unusual and newsworthy and reported widely across the USA.

In 1976 Day married her fourth husband, Barry Comden, who had worked in various aspects of the restaurant business. In the 1960s he was involved with a restaurant dining club which sold coupon books enabling buyers to get two dinners for the price of one at member restaurants. Called Invitation Dinners, in 1965 it operated in nineteen cities around the U.S. including Los Angeles, San Francisco, New Orleans, and Boston.

In the 1970s Comden was hired to open the Old World Restaurant in the Westwood neighborhood of Los Angeles. He also supervised the building of Tony Roma’s, a rib place in Palm Springs CA.

He was also maître d’ or manager (or both) of the Old World Restaurant in Beverly Hills, which was dedicated to serving fresh natural foods without preservatives. Day met him at the restaurant, after she went there on a recommendation from her dentist who was part owner. The Beverly Hills location was the second in the Old World chain which at one time had locations on Los Angeles’ Sunset Strip, as well as in Beverly Hills, Westwood Village, Newport Beach, and Palm Springs.

In a 1976 interview Comden said that Day disliked sauces of any kind. “She likes plain hamburgers, vegetables, plain fish!” he said. It is true that Day was often described as a down-to-earth, no frills woman who rejected glamour, for instance wearing no makeup in public. She said in the interview that one of her favorite dishes at the Old World was the round-the-clock Belgian waffle special, a popular selection that included a whole wheat waffle with sausage, bacon, Canadian ham, or vegetables, plus cottage cheese, two eggs, and a Mimosa cocktail – all for $4.50. 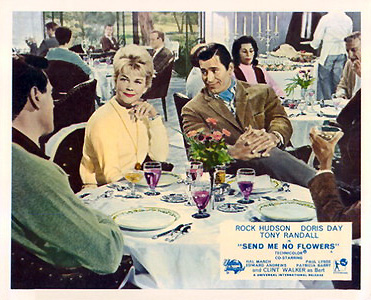 As Day said in her 1976 as-told-to autobiography (Doris Day, Her Own Story, by A. E. Hotchner), when she visited the Old World, Comden would give her scraps to take home for her dogs. The two tried to create a pet food brand that would raise money for an animal foundation she wanted to create, but that project failed as did the marriage. Day and Comden were divorced in 1981.

An interesting footnote: The original Old World, on Sunset Strip, was begun by Jim Baker, creator (with his wife) of a natural-foods restaurant, The Aware Inn, and later The Source, a vegetarian restaurant. Known as Father Yod, he became leader of a commune that eventually moved to Hawaii. Coincidentally, like Day, Baker was born in Cincinnati in 1922.