Lobster stew at the White Rabbit 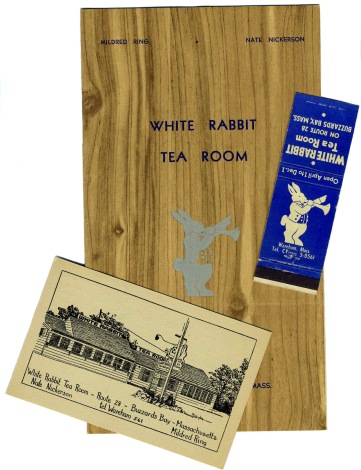 On the menu shown here a bowl of lobster stew cost 70 cents and came with crackers, pickles, and chips. Oyster stew was 50 cents, while fried clams with french fries, cole slaw, and coffee cost 60 cents.

The menu is undated but is probably from the 1940s. Fried lobster was one of the White Rabbit’s most popular dishes, according to Duncan Hines’ 1947 guide book, Adventures in Good Eating. With a fruit cup, tomato, pineapple, french fries, rolls, dessert, and tea or coffee, it came to $1.35. And, of course, they threw in pickles and chips.

In addition to lobster fried, sautéed, or stewed, it was also available as a salad.

Admiring patrons quoted in the 1948 edition of Gourmet’s Guide to Good Eating explained that the reason the Rabbit was always mobbed with people on their way to and from Cape Cod was due to its high standards, excellent food, and, specifically, “plates of hot buttered rolls.”

On Saturday nights the White Rabbit offered a traditional Massachusetts dinner of baked beans for 50 cents. Other interesting dishes on the menu include a vegetable salad sandwich (35¢), a sardine and horseradish sandwich (25¢), and a side order of tomato and cucumbers (15¢).

The tea room got its start in 1931, in West Chatham on the Cape, about 37 miles from the Buzzards Bay location which became its long-term home. Prior to its beginning, owner Nate Nickerson was a taxi driver in Brockton MA, where co-owner Mildred Ring may have worked as a waitress.

Nickerson’s two sons were waiters at the restaurant which was open only from April through November.

In 1966, the final year in which I found advertisements for it, the White Rabbit had evidently abandoned the tea room theme. It then featured liquor and steaks. Nickerson had died in 1950 and it’s likely that it was under different management.

A few years ago I received a nice surprise when a stranger sent me this bowl by Syracuse china used in the tea room.

9 responses to “Lobster stew at the White Rabbit”