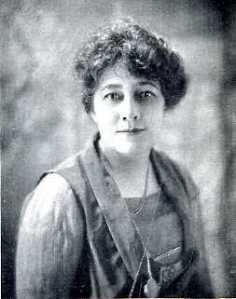 Alice, shown in this 1929 book frontispiece at least 20 years younger than her true age at the time, was one of the most carefully crafted restaurant personas of her day. Due to numerous magazine stories spun by her publicity agent, she was widely known as the poor widow with three children who built a coffee wholesaling and restaurant empire on $38. Even she had to admit (or was this PR also?) that the story was overplayed. “How tired I did get of that woman and those interminable three!” she confessed. Quite honestly, I’ve always felt her much-vaunted opposition to suffrage for women was a publicity stunt too.

She was from a distinguished New York City family. Her great grandfather, Stephen Allen, was mayor of New York City in the 1820s, while her wealthy father Emerson Foote was a charter member of the Union League. Alice, her daughter, and her two sons were listed in the city’s Social Register in 1918. Her career in the coffee wholesaling business began in 1909 with the death of her husband Allan MacDougall. In the 1920s she was said to be the only woman expert in coffee grading and blending in the U.S.

She opened her first eating place, The Little Coffee Shop, in Grand Central Station in New York in December 1919. Waffles were the specialty in her homey café which was decorated with a plate rail and shelves holding decorative china. (Evidently tips were good, because MacDougall had the nerve to charge her waitresses $10 a day to work there.) By 1927 she had signed a $1 million lease for her fifth coffee house, Sevillia, at West Fifty-seventh Street. Her places became known for their Italian-Spanish scene setting. The reason, she said, was that it provided a way to disguise long, narrow spaces, as was clearly the case with the Cortile (shown here).

At Firenze, reputedly used as a movie set, she dressed her black servers like Italian peasants in bright uniforms and head scarves and had them go about filling copper jugs with water from a stone well. Tables were set with imported pottery which she sold as well, along with her Bowling Green Coffee. The Mediterranean village style mimicking courtyard interiors became wildly popular throughout the U.S. in the 1920s and countless women were inspired by MacDougall to open tea and coffee shops of their own. The chain went bankrupt in the depression and new management took over for a time, lowering prices and adding cocktails to the menu.