Interest in historical Green Book guides for Black travelers has been growing in the past decade and the new movie of this title will surely increase it.

The Green Books’ slogan, “Covering the United States like a blanket,” nicely sums up its goal of making travel more comfortable (maybe even enjoyable) for Black travelers living in a country that typically greeted them with hostility whenever they moved outside their restricted neighborhoods and social roles.

Prior to the arrival of the Green Book, Black Americans relied on the kindness of strangers – also Black – when traveling. Until the 1960s, Jim Crow laws in Southern states barred them from access to white hotels, resorts, and restaurants. Outside the South conditions were not much better, despite civil rights laws barring discrimination in many states. To deal with this, middle-class Black travelers relied on other Blacks who invited them into their homes, even providing meals despite not usually knowing them personally. According to Willis Duke Weatherford’s Race Relations (1934), “The institution of ‘dining out’ is not established among careful [Black] families – it is a reflection on the home to eat in a restaurant; it simply is not done.”

As travel increased among Black business people, entertainers, and tourists, accommodations in private homes were no longer adequate, especially for longer trips. A number of guides were published, among them the annual Negro Motorist Green Book published by Victor Hugo Green, a mail carrier in New Jersey. The guide was renamed the Negro Travelers Green Book in 1952. At some point in the 1950s, Victor became ill and his wife Alma took over as editor and publisher. The last two editions were by new owners.

The Green Books were first published in 1937, then every year after that except for four WWII years, ending with a 1966-1967 edition. With the exception of 1946 and 1958, all of the editions are available digitally in the New York Public Library. A 1946 edition sold for over $4,500 on eBay in 2016 and a copy is owned by Virginia Union University Library. As far as I can tell the 1958 edition is not publicly available. Several editions have been republished.

Green Books were sold directly to consumers and also distributed by Esso after Standard Oil of New Jersey hired a prominent Black businessman to promote Esso to Black motorists. Thirty-eight percent of Esso gas stations were operated by Black proprietors, according to a 1939 essay. Conoco also ran a Negro Travel Service which prepared custom “Touraides” free on request. Quite a few issues of guides devoted pages to new model cars of the major, and a few minor, automobile manufacturers. In the Black community cars were regarded as liberators, as well as providers of good jobs in the manufacturing and service sectors. An essay to this effect, “The Automobile and What It Has Done for the Negro,” appeared in the 1938 edition.

The books provided lists of hotels and tourist homes that were welcoming, most of them located in Black business areas of cities and towns. It also listed restaurants, roadhouses, taverns, nightclubs, beauty and barber shops, service stations, and other businesses. In later years it tended to focus primarily on places to stay. [Osborn’s, 1962]

I’ve looked at all the Green Books in the NYPL collection, paying special attention to restaurants in them. Overall there are not a huge number of restaurants. In 1939, for instance, only two restaurants are listed for the entire state of California.

Most of the restaurants seem to be in Black sections of towns, or are Chinese. Their numbers seem to have been dependent on Victor Green’s informants, who were said to be mail carriers like himself. Coverage was also spotty. Green lived in New Jersey and then New York City, and it’s noticeable that both states are more thoroughly covered than most others.

What seems to be lacking are restaurants in predominately white areas that welcomed Black customers. If Black tourists or business people were visiting Los Angeles, for instance, how would they know which restaurants in the main shopping or business districts would serve them without problems?

Comparing the Duncan Hines’ popular Adventures in Good Eating guide book of the late 1940s with a Green Book of roughly the same time reveals that there is no overlap whatsoever in their listings of Los Angeles restaurants. Not one of the 37 LA restaurants recommended by Hines is to be found in the Green Book or vice versa.

Things had changed somewhat by the 1962 edition. It is striking how many more white-owned and patronized restaurants are listed for New York City that year. Previously the only New York restaurants in the guides were located in Harlem, but now they are all over town. Among them are the Brass Rail chain, Davy Jones Seafood House, and Jack Dempsey’s. It’s hard to know whether the change was due to the policy of the restaurants or the Green Book. 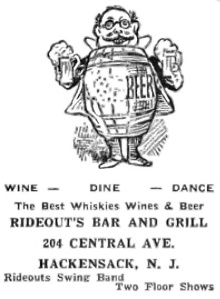 Trying to learn more about restaurants listed in Green Books is difficult. Many I’ve looked for do not show up in city directories, nor in newspaper archives. Judging from feature advertisements for restaurants in later issues, many of the restaurants listed were small neighborhood places that served unpretentious home-cooked meals, quite similar to the majority of white-owned restaurants in the 1930s, 1940s, and 1950s.

I recognized a few names of well-known Black restaurants such as Paschal’s in Atlanta (est. 1947 as a small sandwich shop), Little Gray Shops #2 and #3 (considered Harlem’s better eating places in the 1930s), and Dooky Chase in New Orleans (like Paschal’s, still going strong today). 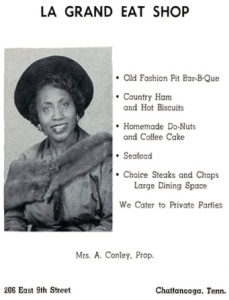 There was also a listing for Bagley’s, operated by Black socialite Caroline Bagley in Sheepshead Bay NY, as a kind of tea room with garden dining. A number of other tea rooms are listed, among them the Black Beauty Tea Room in Mount Olive NC, which had the distinction of being raided in 1950 for serving bootleg whiskey.

Probably quite a few restaurants in the Green Book were community institutions in their time, such as Hammond Café in Abilene TX, specializing in spicy chili. Certainly that was true of Harlem’s Aunt Dinah’s Kitchen, run by Broadway actor Richard Huey. Aunt Dinah’s hosted one-act plays and discussion forums in the 1930s and 1940s, and served as an informal support center for actors who needed a place to gather and have a free meal now and then.

Researching restaurants, hotels, etc. listed in the Green Books would be an interesting way to construct a picture of 20th-century Black life before the Civil Rights Act. It would make a good group project.