Famous in its day: Thompson’s Spa

Beverages have played a big role in the operation of restaurants. I even tend to sort them mentally by what kind of drinks they featured. That is, by whether they had a bar or dealt in alcoholic beverages or were based around coffee, tea, or soft drinks. Throughout history many restaurants began as saloons, coffee houses, or soft drink stands.

Thompson’s Spa, a long-gone chain in Boston that grew to about a dozen units in the 1930s, began as a soda fountain – a “spa” — selling non-alcoholic “temperance drinks.” Open year round, it provided both cold and hot drinks such as these from its 1895 menu:

In case anyone wandered in thinking they were going to get a whiskey, a sign hanging on the wall set them straight: “This is a temperance bar.” Not a big problem since they could duck around the corner and into the alley where the Bell in Hand stood, looking to all appearances like an old London tavern.

Before very long Thompson’s proprietor, Charles Eaton, added sandwiches, doughnuts, and pie to the menu, ALL of which counted as basic foodstuffs – not desserts — to Bostonians then.

Eaton was a graduate of MIT who in 1880, after briefly practicing as an architect in his home town of Lowell MA, had invented an electric telephone signaling device that he sold to Bell Telephone. For some odd reason he chucked that career and joined his brother-in-law (named Thompson) in running a wholesale drug store in Boston. Perhaps selling was in his genes; his father had done well peddling snacks to railroad passengers, thereby earning the title “popcorn king of Lowell.” The drug business must have been slow because in 1882 Eaton and Thompson decided to install a soda fountain for non-alcoholic beverages.

The original Thompson’s Spa was located on the corner of Washington and Court streets in Newspaper Row where the city’s newspapers were located and also home to many of their employes. Near Thompson’s was Pi Alley, aka Pie Alley and officially Williams Court, where many printers, compositors, and pressmen lived in rooming houses and, undoubtedly, ate in restaurants. Eating places were accordingly plentiful in the neighborhood, among them Gridley’s Coffee House and Mrs. Atkinson’s.

Thompson’s kept the appellation “spa” even as it gradually expanded into a regulation restaurant. It added a fuller menu plus much-appreciated amenities such as seats for customers, who had previously had to stand while they ate. Women were finally admitted in 1909. [1933 dinner menu shown]

Although Thompson’s had servers, the spa exhibited some of the earmarks of an automat. Like the early German automat which was primarily a delivery system for beverages, Thompson’s had an elaborate piping system to supply chilled liquids to serving counters. With the decision to add ice cream to the menu in 1915, a new soda fountain was installed that permitted syrups to flow through pipes as well. A bonus was that the soda clerks could prepare an entire ice cream soda or sundae while facing the customers rather than turning their backs. 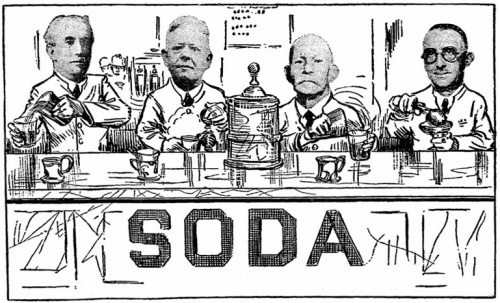 After Eaton’s death in 1917, followed by a bitter battle with his widow, his three sons took over the business and began to expand it beyond the sprawling Washington street edifice it had become. By 1939 it occupied eleven locations in downtown Boston. In addition to soda fountains the Spas had air conditioning, sound proofing, table service, and wall murals. But the company’s finances were not in good shape, due partly to overexpansion during the Depression. In 1946 it was acquired by the Sheraton (hotel) Corporation which daringly installed a cocktail bar at the Washington Street location. In 1949 Sheraton sold the company to New York’s Exchange Buffet Corporation which also failed to make a go of it and began closing units in 1952.

In 1958 the two Spas that remained, one of them on Washington street near the original location, were closed. Former executives and employees tried to carry on at one location for a few years.