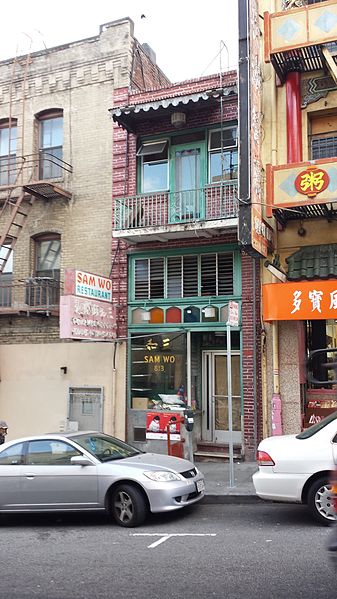 Recently I read an amusing story about “Edsel Ford Fong,” a legendary waiter at Sam Wo (aka Sam Woh), a former restaurant in San Francisco’s Chinatown, who yelled at guests, ordered them around, and often refused their requests. For this outrageous behavior he earned lasting fame and is still remembered fondly long after his premature death in 1984.

As is usually true of  legends there are a few errors. In this case they encourage a somewhat distorted view of Americans of Chinese descent.

His name was not Edsel Ford Fong. It was Edsel Fung. His army, marriage, and divorce records give his middle initial as Y. The insertion of “Ford” – reproducing the name of Henry Ford’s son — must have been either an irresistible bit of showmanship on his part or someone else’s joke. How Fung became Fong I’m not sure.

According to R. B. Read’s The San Francisco Underground Gourmet, published in 1969, Edsel was commonly known as Eddie in the 1960s, his name not yet ossified into Edsel Ford Fong. Read wrote that the restaurant’s dining room on the second floor “is the province of Eddie, the archetypal Chinese waiter, so famous for his rudeness that he cultivates it. For Eddie, every Caucasian diner is a challenge and he moves in, barking, before you’ve sat down. If you don’t order within two minutes, you get a relentless verbal prodding which reduces many customers to the jellied state Eddie prefers, where they allow him to order for them. He shouts all orders down a dumbwaiter in a voice of heroic size. If Eddie doesn’t like you (he doesn’t like anybody, at least until the fifth visit), you have to ask for tea while awaiting your food.”

As the photograph shown above reveals, the restaurant was quite small despite its three stories. It readily comes to mind that Eddie’s performance tended to speed up diner turnover in this tourist-attraction spot which often had guests waiting to be seated.

Although it’s true that Edsel was a waiter in a Chinese restaurant, he was not a “Chinese waiter” as he is often described. His parents were born in China but he and most of his siblings were born in California. He served in the U.S. Army in World War II.

Often the legends quote his quips and remarks in broken English. Given that he was an American I have no doubt he spoke English like the native he was, not like a 1930s Hollywood character. He was no Charlie Chan, but he may have used broken English as part of his act. He was an actor. In fact, he had a role in the 1981 Chuck Norris movie An Eye for an Eye. It’s quite possible he was one of the legion of Californians who wait tables while trying to make it as an actor.

He may not have gone far in Hollywood but he was a smash hit at Sam Wo’s.

One response to “For the record”