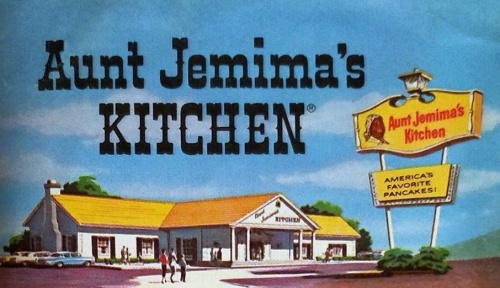 Of all the Black representations found in American white-owned restaurants, the mammy figure has been by far the most common. Many women in the restaurant business of the past have been known as Mama or Mother, but Mammy was reserved for Black women.

The mammy figure, usually grinning broadly in its corporate version, was meant to be a symbol of hospitality universally appreciated by white Americans. Early restaurants using Mammy as part of their name and/or as a visual trademark started appearing in the 1920s in Massachusetts, California, Pennsylvania, and Florida, among other states, with the word Mammy often paired with Shanty, Shack, or Log Cabin. The name and trademark continued in use through the 1970s.

In 1955, probably the best known of all the mammy restaurants opened in Disneyland as Aunt Jemima’s Pancake House, using the sponsorship and trademark of the Quaker Oats Company. The other eating places in Frontierland – among them Pepsi-Cola Golden Horseshoe, Swift’s Chicken Plantation, and Casa de Fritos – also reflected name-brands.

In 1960 Quaker Oats began to franchise Aunt Jemima’s Kitchens, a name variant that signaled wider menu offerings. The first opened in the Chicago suburb of Skokie IL. In 1963 there were 21 in operation in the U.S., plus one each in England and Canada. Among the states, New York led with seven Aunt Jemima’s in the first few years. Pancake restaurants, largely inspired by the high profit potential of pancakes, were the latest food trend in chain eateries at that time, with an estimated 150 around the country. One Aunt Jemima’s franchisee, Pancake Kitchens, Inc., had optimistic plans to open 36 units in the Eastern U.S. I doubt that they were all built, or that the total number of Aunt Jemima’s Pancake Houses and Kitchens across the country ever topped 100.

Protests against Aunt Jemima’s restaurants began in 1962. But there had been objections to the Aunt Jemima image on pancake mix boxes much earlier. Black newspapers ran an editorial in 1937 saying that Aunt Jemima was an “insulting caricature,” in particular criticizing the bandanna she wore over her hair, saying, “The fight against ‘Aunt Jemima’s’ bandanna is one of self-respect.” (Quaker did not get rid of Aunt Jemima’s bandanna until 1968.) Yet, apparently not all Black people were offended by the Aunt Jemima portrayal. In 1952 the Afro-American newspaper in Baltimore hired a marketing company to research the use of Aunt Jemima pancake mix by their Black readers. The company surveyed 501 Black families and 501 white families whose house values or rents were similar. Both groups chose Aunt Jemima pancake mix as their favorite, but it was preferred by a higher proportion of Black respondents (38.1%) than white (31.7%).

It would be interesting to know whether the results would have been the same if the survey had been carried out in the 1960s. The NAACP led the protests, joined by the Congress of Racial Equality (CORE). The biggest victory seems to have been in an affluent suburb of Rochester NY, Brighton, where an Aunt Jemima’s restaurant was proposed in 1963. The two organizations criticized Aunt Jemima for her degrading costume, calling her “a negative stereotype of a Negro subservient to a white family.” The restaurant was not built but once again opinion was not unanimous in Rochester’s Black community. The editor of a city paper, The Frederick Douglass Voice, contended that “These symbols are part and parcel of our heritage.”

The Rochester protest was widely ridiculed in opinion pieces in the white press that characterized protestors as humorless and oversensitive. Writing in Chapel Hill NC’s Daily Tar Heel, author Armistead Maupin called it “comical” and “absurd,” arguing that the mammy was not a negative stereotype but a historical figure to be proud of.

Still, the tide was turning. In 1966 members of the American Federation of Teachers voted at their annual convention at Chicago’s Edgewater Beach Hotel to picket the hotel’s Aunt Jemima restaurant unless it agreed to allow its workers to unionize and get rid of the mammy costume worn by the Black hostess. The delegates then resolved to urge Quaker Oats to drop the Aunt Jemima symbol on its products or face a possible boycott. According to an article in Jet magazine, the restaurant’s hostess expressed unhappiness that her heritage was attacked and that she could no longer wear the Aunt Jemima costume, which she had designed. Obviously the AFT was unsuccessful in asking Quaker to get rid of the Aunt Jemima trademark, which did not happen until this year. 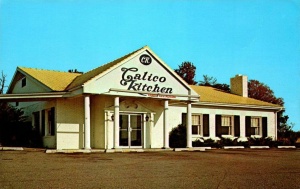 In 1968 and 1969 a number of Aunt Jemima restaurants closed. The restaurant in Grand Rapids MI became Colonial Kitchen, while one in Mount Prospect IL was renamed Village Inn Pancake House. Many across the country became part of the Calico Kitchens chain. In 1970 Disneyland ended its contract with Quaker Oats and renamed its Aunt Jemima restaurant Magnolia Tree Terrace, changing that in 1971 to River Belle Terrace.