No respectable person in the 19th century would have dreamed of even mentioning such a thing as a romantic dinner in a restaurant. The whole topic of “romance” and restaurants was scandalous. Basically it implied a man having sex – and maybe dinner – with a disreputable woman, probably a prostitute, in a private room in the basement or on an upper floor of a restaurant. For decades the term “French restaurant” was widely taken as a euphemism for a brothel, especially in San Francisco. There, at the start of the 20th century, the mayor and his legal counsel made thousands of dollars by shaking down restaurant owners engaged in this trade by having their liquor licenses withheld until they paid for “protection.”

The idea of private dining rooms was an explosive one. An expensive new French restaurant in New York City that wished to be patronized by best society in 1861 felt it necessary to run a special notice explaining its policy: “The Proprietor … fearing that the public has misunderstood that announcement in the papers of the opening of his house, begs leave to notify those who have already favored him with their patronage, and the public generally, that the PRIVATE ROOMS in his house are exclusively for families or dinner parties to order.” Meanwhile, to insure its reputation with society elites, particularly women, Delmonico’s banned even married couples from dining in its private rooms unless they were accompanied by others.

It seems that for a very long time in America’s history there was only one type of food purveyor that might be deemed acceptable for a romantic twosome, and that was not really a restaurant but a place that specialized in ice cream. In late-18th-century NYC this would be a pleasure garden, such as Vauxhall or Contoit’s, dotted with little vine-covered bowers with individual tables inside. There were also some bright and glittery mirrored cafes modeled on those in Paris that attracted young couples and were considered somewhat acceptable.

As late as the World War I era, when restaurants were becoming more respectable, a typical scene in today’s popular media featuring a man proposing to a woman in a restaurant would have been seen as improper. For one thing, it wasn’t really considered totally ok for an unmarried couple to have dinner unchaperoned in a restaurant until the later 1920s. In 1913 a waitress confessed that she was shocked to witness a man proposing marriage. She felt a strong negative reaction to the spectacle:“That was too much for me, and I made up my mind then that if any man ever asked me at the dinner table to marry him I would refuse him on the spot.” 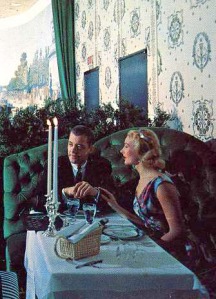 Of course there were plenty of people who defied convention and went to restaurants two by two anyway, and there were restaurants that had romantic attractions such as strolling musicians in the early 20th century. Yet, it wasn’t until fairly recently that restaurants began to specifically and proudly advertise that they were the perfect spot for a romantic dinner. This began to occur in the 1960s, a decade in which more and more Americans went to restaurants in the evening for entertainment.

A popular restaurant in the college town of Columbia, Missouri, exemplified the new trend in the 1960s and the characteristics that would become regarded as romantic. Called the Mill O’Rock, it was in an old grist mill and had a circular stone fireplace in the center of the room with wooden ceiling beams radiating out from it. Young couples flocked there and the owner said it was well known as the perfect place for marriage proposals.