In the 1960s restaurants became seriously interested in portion-controlled entrees. Suddenly any restaurant that aspired to be regarded as sophisticated could have Chicken Cordon Bleu on their menu. Even in the middle of the Arizona desert a teenage employee in a Polynesian restaurant could pop a frozen Cordon Bleu into the microwave, add a slice of orange and some parsley, and – voila! – there you were, dining continentally.

Breaded products that could be dropped into a vat of cooking oil or microwaved were particularly popular with restaurant operators. They were advertised in full color in trade magazines, shown plated just as they might be served to guests. The images that follow were all from 1960s ads.

Steak seems to me an odd choice for breading since its appeal is usually based on representation in a more natural state, often with grill marks on the outside and juicily red insides. Breading turns it into mystery meat. But for the money-conscious entrepreneur it made a kind of sense. A 1968 advertisement for Durkee Food Service Group showed a 4 oz. “polarized” Chuck Wagon Steak which cost only 24c. Add a #10 scoop of mashed potatoes (1½ cents), 4 oz. of mixed vegs (6½ cents) and ½ cent worth of parsley and the meal came to 33½ cents. The advertisement suggested charging the customer $1.25.

As much as I’ve searched I’ve failed to discover what “polarized” meant, but I suspect it may have been a disinfecting method or some kind of process that made cheap reheated breaded meat more acceptable to diners.

Swift & Co.’s hotel and restaurant division also offered a breaded Chuck Wagon steak, shown here with corn sticks, baked beans with chopped onions, and banana peppers. Not only did Swift give its steak the same name as Durkee, it looked equally unappetizing. I suppose there was a degree of honesty in the name Chuck Wagon in that both were probably constructed out of inexpensive chuck steak. 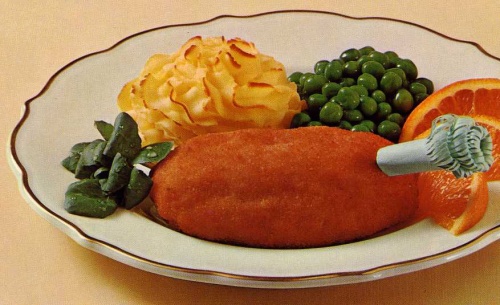 Chicken a la Kiev evidently wasn’t sufficiently elegant sounding to Durkee which renamed their product Empire Chicken Kiev. Its selling point, according to the 1968 advertisement in Food Service Magazine, was that it offered “year-round banquet quality chicken without seasonal price fluctuation.” The dish, whose sadly wilted watercress garnish cost ½ cent, had a total cost of 82 and 1/4 cents. The paper frill is hilarious. I have to keep reminding myself that professionals were paid to design dishes like this.

And now to fish processed by Blue Water Seafoods. Here we see their “standard fish portion,” a severely rectangular industrial looking product. In the advertisement it is fancied up and given the name “Fish du Monde.” The serving suggestion is to “cap it with hot mushroom sauce – straight from a can of mushroom soup” (4 cents). Eleven cents for the fish, 4 cents for the boiled potatoes, and 7 cents worth of vegetables and it’s a full-scale dinner. Suggested menu price in 1961: $1.00.

Blue Water also offered “proportioned seafood,” such as the Custom Cut Fillet shown here. “Looks like a fillet, fries like a fillet,” proclaims the copy. A half-hearted try at looking natural.

But what if a restaurant operator really wanted their processed fish to look more realistic? Moore’s Seafood Products, Inc. offered a Cut Haddock Portion, assuring buyers that “even the most discerning gourmet would have a difficult time” distinguishing it from a natural haddock fillet. Called the Aberdeen Cut, it was a patented shape whose “thin, beveled portions . . . develop[ed] the crisp, flaky edge characteristic of the natural fillet.” And, assured Moore’s, an added bonus of the new 1968 shape was that “on a platter or plate, it looks larger than ordinary portions of the same weight.” Are the tiny bits of parsley also meant to make the fish look larger? 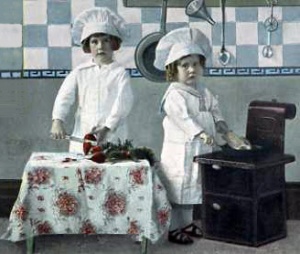 Recently I interviewed someone who had cooked in a 24-hour restaurant located on the outskirts of a small Midwestern town in 1970.

He worked there one summer. He was the sole night shift kitchen staff from 10 pm to 6 am. Previous experience? One week as cook at a children’s summer camp the previous year.

Although he gave it little thought at the time, he now suspects the restaurant was designed, owned, and operated by the food processing company that supplied the food, the menus, the “recipes” – in short, everything. Follow-up research revealed that the company supplied 1,500 restaurants, schools, and institutions in four states. 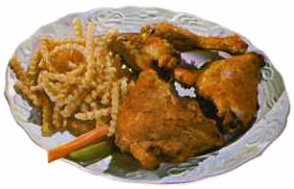 The building was new and blandly modern. It was surrounded by a parking lot. Through a big plate glass front window was a view of an interior with booths, formica-topped tables and chairs, and a counter with stools. The decor, as he remembers it, contained multi-colored hanging lights, fake stone, and grill work in a coordinated style he calls “corporate.” About 60 people could be seated. At night, except right after the bars closed on weekends, there were rarely more than a dozen patrons at any one time.

Most of the night customers were working men, traveling salesmen, work crews, people passing through town. It wasn’t much of a local hangout, unlike the bowling alley restaurant at the other end of town. It served no alcohol.

Was there a chef at this restaurant? Answer: prolonged laughter. The manager had preprinted forms on which he checked off what supplies were needed. 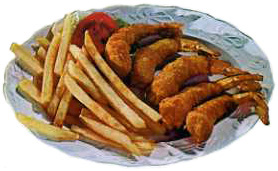 A popular order, particularly with the barflies, was steak and eggs ($2.50 with toast and coffee). Eggs were one of the few items of fresh food in the kitchen other than lettuce and tomatoes. “Everything was frozen so once you knew how to deep fry it or put it in the Lytton [microwave] oven, you were set,” he said. This included pies (“Served Hot from Our Electronic Ovens”), Cordon Bleu, Breaded Pork Tenderloin, Golden Fried Chicken, and Fillet of Perch. Potato Salad came in a tub, Soup of the Day in giant cans. Hard boiled egg came in a long tube so that every slice was the same. Home Baked Bread? Well, I think you know.

The food  images shown in this post are stickers applied to the restaurant’s menu before the entire thing was plasticized. I take them to be generic, as I do the meaningless logo from the menu’s cover which looks like it was intended for a “steak & ale” eatery.

With some orders he got to do what he considered “actual cooking”: “Liver and onions. You have to make the bacon and onions – that was actual cooking. Denver omelet, that was actual cooking.” He enjoyed making sandwiches at the deli counter. One of his personal favorites was the Denver Sandwich — chopped ham, pickle, and scrambled egg made in a patty and served on toasted bread. He also enjoyed cottage cheese and pineapple. 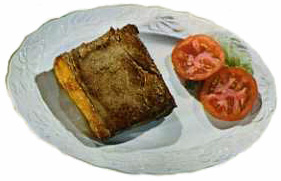 Diners rarely sent food back to the kitchen. “It’s amazing how many different kinds of food that a 16-year old could cook and not ruin anything. I was feeding a lot of people with a lot of liability and it didn’t go wrong,” he said. The manager criticized him for one thing only: giving customers too many french fries. Limit them to a handful, insisted the manager. So he garnished the plates with parsley and “Never got in trouble for using too much parsley.”

Despite all, he had surprising praise for his old workplace, saying, “I was impressed with the efficiency of the kitchen. It was easy to work in. I liked that there was a ready supply of clean linens.” He added, “There were not many dining establishments. Before Applebee’s this filled a niche. It was more ambitious food than people had access to before.”

Did he ever return there as a customer? “No,” he said, “I had no warm fuzzy feeling for the place.”