Learning to eat (in restaurants) 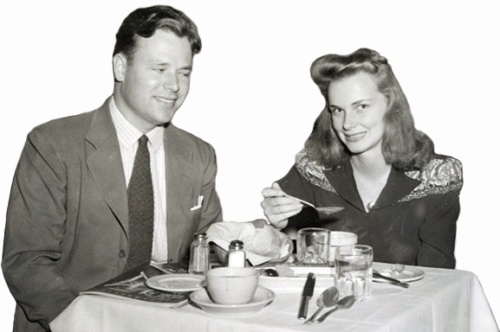 Eating in restaurants is so common today that it is hard to imagine that it in the past many people found it confusing and embarrassing, especially in more formal restaurants.

They had trouble figuring out menus, felt nervous and self-conscious, worried about their manners, and generally didn’t know how to act. 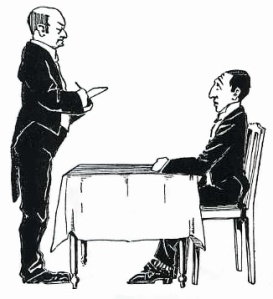 One solution was to avoid public eating places. That way no one would witness your poor manners, no haughty waiter would sneer at you, other patrons would not stare and examine your clothes as you walked in.

Restaurants were primarily men’s turf in the 19th century. Until the 1890s when affluent women began entertaining their friends at restaurant luncheons, restaurants were often seen as undesirable locations for women. High society was very private. Dinner parties were held in the home, outside public view. In a culture that was completely the opposite of today’s celebrity whirlpool, being seen in public was demeaning, especially for women. Additionally, many women of the 19th century disliked eating in a room with strangers.

Even men and women who enjoyed restaurants found ordering from a menu entirely in French difficult. When menus were in English, they were still daunting to unworldly Americans who had never experienced many of the dishes served. Books and articles offered advice but many diners gave up the struggle and instead let the waiter select their meal.

An observer commented in 1899 that “it is a severe trial for many women, and some men, to enter a hotel dining room and particularly hard if it must be done without a companion. Some that march in with boldest front and utmost nonchalance are but actors, trembling within while brave to outward seeming.” Actors aside, other people unfamiliar with restaurants could be identified by their behavior. Some rushed in, going straight to a table without being escorted there by the head waiter. Others might give themselves away by accidentally ordering a ridiculous set of dishes such as fruit and pickles or by being overly chummy with the waiter. According to an 1890 account, going to a high class New York restaurant solo led waiters to conclude that the patron “is a countryman or unused to restaurant life.”

For the poor or the newly arrived immigrant, a restaurant could be a terrifying challenge. Two period novels illustrate this beautifully. In A Daughter of the Tenements (1895), the son of a tenement janitor goes to a restaurant for the first time:

Tom had never, for an instance, had a table napkin in his hand; had never seen more than one knife and fork placed beside a plate; had actually never been served at table by any person other than one who was eating with him; had never seen wine drunk at meals.

In The Rise of David Levinsky (1917), the main character experiences his first visit to a “high-class restaurant”:

The immense restaurant, with its rows and rows of table-cloths, the crowd of well-dressed customers, the glint and rattle of knives and forks, the subdued tones of the orchestra, and the imposing black-and-white figures of the waiters struck terror into my . . . heart. The bill of fare was, of course, Chinese to me, though I made a pretense of reading it. The words swam before me. . . . The worst part of it all was that I had not the least idea what I was to say or do. The occasion seemed to call for a sort of table manners which were beyond the resources . . . of a poor novice like myself.

African-Americans rarely experienced embarrassment in restaurants for the simple reason that they were not welcome in most of them before the 1960s Civil Rights era. Even those who attained success in the restaurant business reported an unfamiliarity with restaurants in their early lives. Sylvia Woods, founder of Sylvia’s in New York City, disclosed that when she moved to New York from South Carolina at age 28 she had never been in a restaurant. Renowned chef and cookbook author Leah Chase, of Dooky Chase in New Orleans, said she had never set foot in a restaurant until she got a job waiting on tables. “Black people didn’t go to restaurants,” she said. “That’s the way it was.”

By the 1920s it was considered acceptable for young (white) women to go to a restaurant on a date. But this could be hazardous, as “C. S.” confessed to a Boston newspaper in 1927. “Having never eaten in a restaurant before,” she wrote, “imagine my surprise when I picked up the square of butter from the butter dish, thinking it was cheese! That was my first and last date with him.”

In 1970 an etiquette expert reported that she frequently encountered young middle-class women who had never eaten in a restaurant other than a hamburger stand and said they were unsure how to order or to use silverware.

Has discomfort with restaurants disappeared? While writing this post I’ve started to wonder if my opening sentence is wrong. Maybe achieving a feeling of assurance in restaurants is actually an ongoing project.

Taking the din out of dining

In the modern world nothing is more expensive than quiet. This certainly holds true for restaurants. The difference between a quiet and a noisy restaurant rests mainly on good padding, both of the room and the patron’s wallet.

But there is also such a thing as too much quiet, such as in a failing restaurant with few patrons. Nobody wants that kind of quiet. Which brings up the point that since the proliferation of theme restaurants in the 1970s, fun has become one of the biggest attractions for restaurant goers. And in most people’s minds fun = noise and crowds.

It seems as though since the 1970s noise has crept up the restaurant ladder, beyond the raucousness of TGI Friday and its kin, so that today even many fairly expensive, white-tablecloth restaurants are so noisy that conversation is difficult. This issue was called to my attention by a friend who asked where she could find a list of restaurants that are free of din. If anyone knows of such a thing, please let me know. With an aging population – older diners, particularly in the 55 to 65 year-old range, make up a sizable market – the noise problem becomes more pressing.

Although the popularity of restaurant-going is comparatively new, complaints about restaurant din are not. In 1848 a satirical essay in that fascinating periodical The Spirit of the Times (“A Chronicle of the Turf, Agriculture, Field Sports, Literature” – and almost everything else) said:

It has been ascertained that a gentleman never enjoys his dinner more than when it is served up in the midst of confusion, excitement, and noise. For this reason, the denizens of New York, observing and sagacious, delight to dine in cellars, and wisely select those which the most boisterous people frequent.

In 1869 another writer observed that at noon in downtown NYC “eating houses are in one continuous roar. The clatter of plates, the slamming of doors, the talking and giving of orders by the customers, the bellowing of waiters, are mingled in a wild chaos.” It would get worse. Restaurants became even noisier when music made its dining room debut, and again during World War II when they were packed to bursting capacity (see image). Cafeterias could be especially deafening.

However, there were some exceptions along the way. The upstanding Craftsman Restaurant in NYC eschewed artificial gaiety. A diner in 1914 wrote (revealing the genteel racism of the period): “About me people were lunching quietly, without haste and without boisterousness. Soft-treading little men of Nippon brought delectable viands on dainty dishes. A stringed orchestra was playing softly . . .”

Tea rooms were also singled out in the teens and 1920s for their peacefulness. Very likely the absence of alcoholic beverages in them played a big role. NYC’s Colonia had “a quiet atmosphere that appeals to the woman of culture,” while in Greenwich Village the women proprietors of The Candlestick provided a luncheon setting “without the annoyance of shrieks, laughter, loud talking and noises that seem to be the necessary accessories of every other similar place in our Village, perhaps in order to create ‘bohemian atmosphere.’” Yet drinking did not inevitably lead to din. Rather surprisingly, the speakeasy restaurant was seen by some as a quiet, relaxing haven where attentive waiters served well-behaved patrons united in a “civilized conspiracy.”

Quiet has also been seen as a necessary condition for a romantic dinner. But let’s note that on such an occasion diners are usually willing to fork out a bit more cash than usual for privacy and a chance to hear the cork pop and the harp being plucked. The question remains: can a restaurant that is thriving be quiet without being expensive?