Chocolate on the menu

Chocolate concoctions have always been found in the dessert section of restaurant menus. Right? You’ve already figured out that I’m going to say no. But, naturally, it’s a bit more complicated than that.

Until the later 19th century the main form in which Americans consumed chocolate in public eating places was not as a dessert but as a hot beverage.

Confusion arises over the meaning of dessert, which is used in various ways on American menus. In the 19th century, dessert often was the very last course, coming after “Pastry,” which included pies, cakes, puddings, and ice cream. In this case dessert meant fruit and nuts. But sometimes ice cream was listed under dessert. For example, the Hancock House hotel in Quincy MA displayed the following on a menu in June of 1853:

In cheaper eating places, there was no fruit or nuts and dessert came closer to what we mean  today, which is how I will use it for the rest of this post – referring to sweet dishes that come toward the end of the meal and are rarely nuts and usually other than simple fruit.

The absence of anything chocolate on the Hancock House menu was not unusual for that time. I looked at quite a lot of menus and the first instance of chocolate other than as a beverage that I found was chocolate ice cream in the 1860s. It was not too unusual to find chocolate eclairs on a menu in the later 19th century, and chocolate cake turned up in the 1890s. According to an entry in The Oxford Companion to Food and Drink, however, chocolate cake in the late 1800s could refer to yellow cake with chocolate frosting. 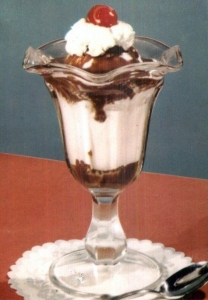 By the early 20th century chocolate appeared on menus in various forms: as pudding, layer cake, devil’s food cake, ice cream, eclairs, and ice cream sodas and sundaes. In the 1920s, chocolate shops appeared and were similar to tea shops. They offered light meals, desserts, and chocolate as a drink or as candy, and other desserts. They were popular with women, as were department store tea rooms, another type of eating place that was heavy on sweet things. In the case of Shillito’s department store in Cincinnati, a 1947 menu offered quite a few chocolate treats.

Starting in the 1970s and reaching a high point in the 1980s began a chocolate frenzy that continues today. With the help of restaurant marketing, millions of Americans discovered they were “chocoholics.”

If you stepped into San Francisco’s Pot of Fondue in 1970 you could do Cheese Fondue for an appetizer, Beef  Bourguignonne Fondue as a main dish, and Chocolate Fondue for dessert. But the Aware Inn in Los Angeles pointed more forcefully at dessert trends to come with its 1970s “dangerous Chocolate Cream Supreme” costing $2 and described as “somewhere between chocolate mousse and fudge.”

Adjectives such as “dangerous” continued the sinful metaphor conveyed earlier by “devil’s food.” Soon “special” chocolate desserts were named for immoral inclinations (“decadence”) or perhaps fatal pleasures (“death by chocolate,” “killer cake”). All this led at least one journalist to protest against the unsubtle marketing of chocolate desserts in the 1980s. She pleaded with servers: “Do not expect me to swoon when you roll back your eyes in ecstasy as you recite a dessert list that offers nothing but chocolate, via cheesecake, chip cake, profiterols, madeleine, mousse, bombe, eclair, napoleon, torte, tart or brownie.”

From restaurant reviews from the 1980s it’s noticeable that most reviewers jumped on the chocolate bandwagon with descriptions along the lines of “scrumptious” chocolate desserts “to die for.” But quite a few were critical, especially of chocolate mousse, which was readily available to restaurants powdered or wet, even “pipeable.” After a 1978 visit to a restaurant expo overflowing with convenience food products, the Washington Post’s restaurant reviewer Phyllis Richman observed, “The final insult of your dinner these days could be chocolate mousse made from a mix, but that is only another in the long line of desecrations in the name of chocolate mousse.” Often critical reviewers deplored chocolate mousse that tasted as if made of instant pudding mix combined with a non-dairy topping product, which very likely it was.

“Chocolate Decadence” cake took a beating in a review by Mimi Sheraton who in 1983 no doubt irritated many chocolate lovers when she referred to the prevalence of “dark, wet chocolate cake that seems greasy and unbaked, the cloying quality of such a sticky mass being synonymous with richness to immature palates.” More recently, what I call a “fantasy escape” restaurant in upstate New York was cited unfavorably for serving a boxed cake provided by a national food service that it merely defrosted, sprinkled with fresh raspberries, grandly named “Towering Chocolate Cake,” and placed on the menu for a goodly price.

Let the buyer aware, but no doubt many restaurant patrons do in fact realize that they are willing co-conspirators in fantasy meals. Along these lines, nothing can be too chocolate-y, triple obviously outdoing double. Decorations of some sort are de rigeur. Along with whipped cream, ultra-chocolate desserts might be adorned with orange rind slivers, raspberry sauce, or dripping frosting. In 1985 the Bennigan’s chain brought their “Death by Chocolate” into the world, consisting of two kinds of chocolate ice cream, chopped up chocolate candy bars, a chocolate cracker crust, with the whole thing dipped in chocolate and served with chocolate syrup on the side.

One theory about what brought about restaurants’ chocolate dessert blitz relates it to declining sales of mixed drinks in the 1980s as patrons became aware of the dangers of drinking and driving. Then, according to a 1985 Wall Street Journal story, elaborate, expensive desserts offered a way to make up for lost cocktail sales. Fancy desserts are undoubtedly higher-profit items than many entrees, but I suspect that another major factor favoring the rise of ultra-chocolate desserts was the culture of consumer indulgence that increased restaurant patronage in the 1970s, 1980s, and beyond.

11 responses to “Chocolate on the menu”