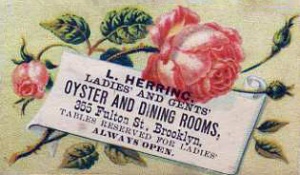 One way of sorting eating places is by the hours they keep. Those that are open 24 hours a day stand out from the crowd by their tirelessness and involvement in sometimes unwanted adventures.

Mostly there are three kinds of customers for all-night restaurants: those who travel at night, those who work at night, and those who play at night.

In pre-Civil War NYC all night eateries were haunts of “b’hoys,” a class of rogue males (sometimes accompanied by their g’hals) prominently made up of firemen and the more prosperous newsboys. They enjoyed oyster cellars, but one of their favorite places in the 1840s was Butter-cake Dick’s, where for a mere 6 cents they could get a generous plate of biscuits with butter and a cup of coffee.

The authors of the many Victorian “lights and shadows” books about urban immorality were quite fascinated by the dubious goings on in all-night supper clubs. No doubt their readers felt a shiver of horrified excitement when they spotted signs along city streets advising “Ladies’ dining parlor, up stairs”’ or “Refreshments at all hours.” Was it or wasn’t it?

One such book was George Ellington’s The Women of New York; Or, the Under-world of the Great City. But even Ellington observed that patrons of private dining rooms in these quasi-bordellos were also there to eat. He reported that patrons could be discovered consuming fish balls or pickled salmon at 3 or 4 a.m.

People working at night surely outnumbered the pleasure seekers. Thomas Edison recalled that when his machine shop was on Goerck Street in NYC in the 1880s he used to grab a bite at 2 or 3 a.m. at a rough little place: “It was the toughest kind of restaurant ever seen. For the clam chowder they used the same four clams during the whole season, and the average number of flies per pie was seven. This was by actual count.” No doubt many of his fellow diners included some outside the law but also other denizens of the night such as newspaper printers, trolley conductors, bakers, and factory shift workers.

All-night restaurants were not just found in NYC but in all big cities and were often densest in areas near newspapers, city food markets, and ferries. Chicago’s all-night cafes on State Street were often portrayed as unsavory places where police connected with “stool pigeons” enjoying their midnight snack. Upstanding citizens shrank from the mere thought of all-night eateries but in actuality they were probably some of the most democratic places in that they drew characters from all stations of life. 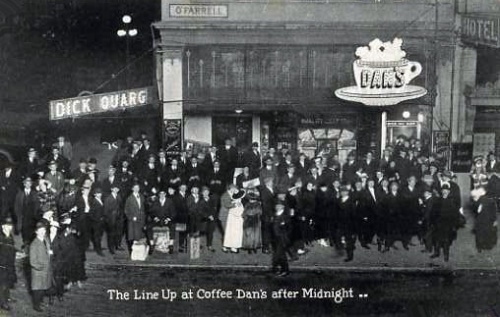 An all-nighter of renown in the 20th century was Coffee Dan’s, originally in San Francisco, which operated as an eating and entertainment venue, then a speakeasy in the 1920s and early 1930s. Its attitude in the mid-1920s is nicely expressed in the claim, “There will be dancing to the tinkle of a piano; there will be songs and it will never, never close, not even for fire, not even if the supply of ham and eggs is exhausted.” Coffee Dan’s expanded into a small chain and the Hollywood location became something of a gay hangout in the 1950s, a role played by all-night cafeterias such as Stewart’s in NYC’s Greenwich Village.

With so many night shifts for war workers in World War II, the demand for all-night restaurants rose to new heights. A 1948 restaurant sanitation manual noted how difficult it became to clean restaurants during wartime because of the never-ceasing 24-hour influx of customers.

The only figures I’ve run across concerning all-night restaurants were from the mid-1960s when 10% of eating places fell into that category. Some chain restaurants, especially coffee shops, pancake houses, and places offering breakfast at all hours, are founded on the 24-hour principle. Often they are located near highway exits to capture truck drivers and other nocturnal travelers.

3 responses to “We never close”