Even in a good-sized, prosperous city as Springfield MA was in the late 19th century, a chance to sit down and be served a cup of hot chocolate or other light, non-alcoholic refreshments was hard to come by. Other than hotel dining rooms, usually open only during mealtimes, there was just about nothing.

Except for the city’s leading confectioner. As was true in other cities, a confectionery restaurant assumed a prominent role in feeding and entertaining the public.

E. C. Barr & Co. was Springfield’s leading restaurant, caterer, candy and ice cream maker, and baker of fine pastries and wedding cakes. In an advertisement in December 1889 it advised, “Ladies while on your Holiday shopping tour try a cup of that hot Chocolate, Cocoa or Bouillon at BARR’S Restaurant.” For most of its long existence it did business on Main Street, for 20 years occupying a corner just across from the city’s foremost retailer, the Forbes & Wallace department store.

Barr’s reach went beyond Springfield. With a branch in Northampton, its fame was known throughout Western Massachusetts. The restaurant ran advertisements in Amherst to lure students from the Massachusetts Agricultural College to come out for a “spread” or a class dinner. This 1884 example ran in the M.A.C.’s yearbook.

Barr’s stayed in the public eye as a prime banquet venue and with elaborate show window displays of confectionery. In 1909 the company commemorated the exploration of the North Pole with representations of Cook and Peary and their exploring party, all made of sugar fashioned by owner Edwin Barr’s son Walter.

Recently I was lucky to find the postcard image of the Japanese Tea Room in the Barr restaurant shown above. It dates from about 1906, when a dessert called the Priscilla College Ice, an ice cream soda with a “totally different flavor,” was a popular order. Edwin Barr’s second wife, Minerva, worked with him and it’s likely she supervised the tea room and may have chosen the Japanese theme which was in vogue then.

Barr’s was begun in 1865 or 1866 when founder Edwin Barr finally decided to give up prospecting for gold in California and Montana and returned to Springfield to settle down. It wasn’t until around 1891 that Edwin acquired the Main and Vernon corner (384 Main), one of the most valuable corners in the city’s shopping district. (It’s likely that the 884 Main address on the trade card shown here is misprinted.) 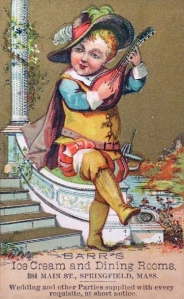 In 1870 an article in the Springfield Republican claimed that Barr’s decor was more “tasteful” than that of Delmonico’s in New York. Keep in mind that the New England taste of that time leaned toward plainness. The story also praised the appearance of the restaurant’s menu which was printed on cream paper with a thin magenta border – “neat, but not gaudy.”

Sadly the Barr family’s lives were not so neat. In 1891 Edwin’s eldest son, George, who managed the family’s Hotel Warwick in Springfield, shot and killed his wife and himself in a fit of jealousy. Edwin’s third son, Jesse, manager of the Northampton restaurant, died of syphilis in 1900.

Fortunately Edwin’s son Edgar lived a long life and carried on his father’s business for a time after Edwin’s death in 1911. In 1912 the restaurant moved to East Bridge Street and later was recreated on State Street. I have not been able to discover how long it remained in business.

Clearly Barr’s glory days were at Main and Vernon. That site underwent many demolitions, the latest being construction of the Monarch Place hotel and office complex.

11 responses to “Hot chocolate at Barr’s”