That glass of water 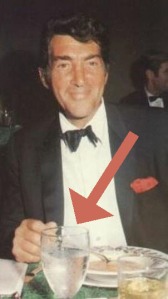 I don’t know how many times I’ve gone to a restaurant with someone who answers “Just water” when the server asks what they would like to drink. For some inexplicable reason I am always strangely disappointed when I hear this reply. Is it my Irish-German ancestry haunted by ghosts of the temperance movement? I honestly don’t know but I am fascinated with the question of why that glass of water is plunked down first thing in American restaurants.

Why are Americans so crazy for water when diners in other parts of the world are not? European visitors from the 1860s to yesterday never failed to notice the American habit. In 1883, a Londoner reported that in hotel dining rooms, “Immediately the guest is seated, the attendant at the table brings a napkin, a bill of fare, and a glass of iced water.” Another crossly noted, “You cannot escape from this glass of water from the day you set foot on American soil to the day you leave it…”

Carbonated soda water and mineral water were available in early 19th century American cafes, as was ice for beverages. But the first mention I’ve found of water served free with a meal occurs in the 1840s, which happens to be the decade that NYC’s and Boston’s public water supply began. In the late 1840s a newspaper reporter reflected on cheap restaurants where patrons could enjoy “pumpkin pie at four cents the quarter-section, with a cup of Croton, fresh from the hydrant, gratis,” referring to the Croton Reservoir from which water flowed into NYC beginning in 1842. 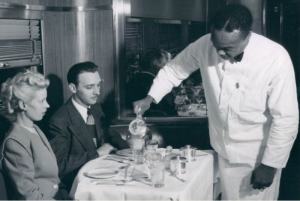 It is also a decade when the temperance movement geared up, praising cold water as the most moral beverage and the only one drunk in Heaven. The teetotaling followers of food reformer Sylvester Graham found cold water the sole drink consistent with “nature’s bill of fare.” The mission of temperance advocates was to make pure water widely available in hopes they could lure drinkers away from the hard stuff. The battle continued at the Centennial Exposition of 1876. After failing to prevent the sale of beer and wine at the fair’s European-style restaurants, temperance groups installed a free ice-water fountain.

Restaurants run by new Americans did not immediately fall into line. Italians, for instance, preferred wine as their basic beverage. A Boston diner in 1906 was impressed with how totally different it was to eat in an Italian restaurant as compared to a typical wineless Yankee lunch room where the staples were baked beans, pie, doughnuts, cookies, cake, gingerbread, tea, toast, and boiled dinners — all washed down with ice water. 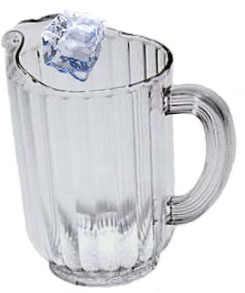 Although the custom of providing water was likely firmly established during Prohibition, even before that water service gradually lost its temperance overtones and became standard operating procedure in restaurants. A waitress in 1907 learned the first day of work that as soon as she took an order she was to give the patron water as a signal to the head waitress that the order had been taken. A 1908 manual instructed waiters to “serve water first” and the bread and butter set-up later.

Americans don’t always drink the water provided in restaurants, but they expect it to be there. In 1930 patrons of luncheonettes coast to coast were dismayed by burnt toast, dirty menus, and failure to serve water unless requested. A National Restaurant Association survey in 1978 found that customers did not like to ask for water and almost 75% of them were annoyed if there was no water on their table.

12 responses to “That glass of water”