The browning of McDonald’s

It is always gratifying to find a piece of ephemera that marks a transition. The postcard above is blank on the back, probably to allow McDonald’s franchises to imprint it with their locations as they completed the changeover from the old building style to the new in the 1970s.

The old-style McDonald’s was based on the original design of California architect Stanley Meston who had once worked for Wayne McAllister, noted designer of modernistic 1930s drive-ins. The design was made for the McDonald brothers who in the 1950s had begun to franchise their California drive-in.

When Ray Kroc obtained a franchise from the brothers and spread McDonald’s outside the West and across the nation, he made modifications to Meston’s design, simplifying the arches and adding a glass-enclosed vestibule to the front as shown on the postcard at the top. 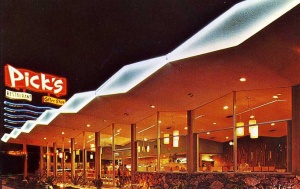 The original Meston design was of an exuberant style known as “Googie” that featured eye-catching elements such as swooping roofs, extensive plate glass, neon, and the use of shiny industrial building materials (but sometimes also lava stone as shown in Pick’s). I recommend the books Googie and Googie Redux by Alan Hess, which I have drawn upon for this post, along with Orange Roofs, Golden Arches by Philip Langdon.

In the 1960s Kroc’s McDonald’s (he had bought out the McDonald brothers in 1961) began to run up against resistance from local zoning boards that wanted something more restrained than the “franchise schlock” look of the golden arches model. In 1968 the corporation went to work on a new design for a brick-faced building with a dark mansard-style roof and indoor seating. “We have taken off the gaudy materials and eliminated the circusy atmosphere,” said a McDonald’s executive in charge of design. The arches, on their way to become an ever-smaller letter M logo, were relegated to the sign. The first mansardized McDonald’s opened in the Chicago suburb of Matteson in 1969.

The little red, white, and yellow stands began to disappear. In 1972 most – about 75% — had been remodeled or replaced, leaving only about 250. By 1980, fewer than 50 remained, out of a total of 5,082 McDonald’s in the U.S. Preservationists in Oregon and Virginia tried to have old-style McDonald’s placed on historic preservation lists on the grounds they were symbols of America; they were turned down. By 1990 only five remained. A McDonald’s in Downey CA which opened in 1953 has been preserved, and this is probably the only example of the original design remaining other than the corporation’s recreation of Kroc’s first unit in Des Plaines IL.

The cultural climate that brought McDonald’s and other fast food restaurants into contention with critics who sought to keep Googie buildings out of their towns and neighborhoods was in stark contrast to the optimistic futurism exhibited at the 1964-65 New York World’s Fair. Philip Langdon has used the term “the browning of America” for the turn away from buildings that were shiny, colorful, and blatantly commercial to ones that were low-slung, dark, and of natural looking materials. He suggested this shift signified a downcast attitude toward America. “The demand for a less garish roadside strip, when combined with other currents in the culture – a growing awareness of the nation’s faults and a fading away of the once-euphoric attitude toward futuristic technology – fostered a more subdued esthetic,” he wrote.

But another interpretation begs to explain the change as a progressive corrective to the post-WWII abandonment of nature, as evidenced in commercial roadside strips, napalm warfare, chem-lab convenience foods, and the widespread despoliation of the environment. 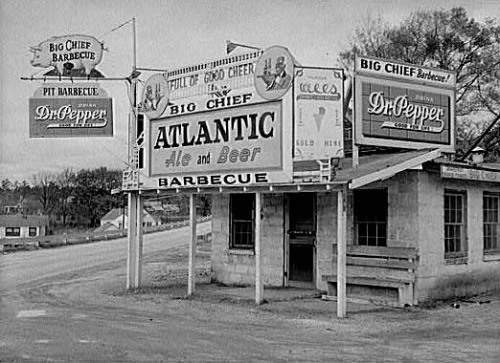 Through most of American history the principal reason for barbecues was political campaigning. These outdoor events were characterized by huge crowds who feasted on animals cooked whole, such as pigs, sheep, oxen, and cattle, suspended on poles or laid on grates over charcoal pits dug in the ground. A Democratic Party barbecue in Lexington, Kentucky, in July of 1884 drew 10,000. Eighty-five oxen were roasted along with many sheep, hogs, and chickens. Accompanying dishes included burgoo (stew), “wagon-loads” of bread, and vegetables.

Barbecues were not usually commercial ventures until the 20th century, yet they were not entirely unknown among earlier caterers. A Tea and Coffee House in outlying Boston in 1769 offered to host barbecues for groups, “either Turtle or Pigg.” Also, occasionally in the 19th century a barbecued rabbit or such would show up on a hotel menu, particularly in the South. And toward the end of the 1800s barbecue stands, like hamburger stands, were likely to appear at fairs and other outdoor festivities.

Although barbecue remains a relative rarity in Eastern restaurants up to this day, it began to show up at roadside stands elsewhere in the country not long after the turn of the century. Stands grew popular in the 1920s, probably because they were often located on cheap real estate at the edge of town where they were ideal for a pleasure drive at a time when many Americans were acquiring cars. The Pig Stand, often cited as America’s first curb service drive-in, started in Dallas in 1921 on the Dallas-Fort Worth highway. Memphis also built a strong reputation for barbecue restaurants — Leonard’s began in the 1920s while The Shanty Inn started later but both were known for barbecue cooked in a smoke oven. Yet barbecue was not only a product of the South. Barbecue shacks, shanties, and stands could be found, for instance, in Missouri, Kansas, Arizona, California, and Utah, particularly in the 1930s when the “roadside eats” business lured people looking for ways to make a living. Detroit became a barbecue mecca during World War II when Southern blacks moved North to work in the auto industry.

Despite the success of Pig Stands and Loves’ Wood Pit Barbecue (begun in Los Angeles in 1948), barbecue has not had a strong profile among nationwide restaurant chains. Maybe for this reason, along with regional variations in sauces and cooking methods, it is a favorite with fans of down-home “roadfood.”