Anatomy of a restaurateur: George Rector 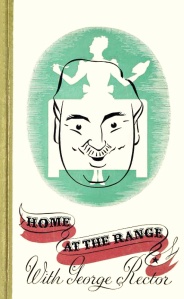 Although it’s well known that owning and running restaurants is risky, the career of George Rector had more zig zags and dead ends than most.

Beginning well with apprenticeship at top Parisian restaurants and a medal from La Société des Cuisiniers de Paris, he ended his career in the food world promoting industrial food products. 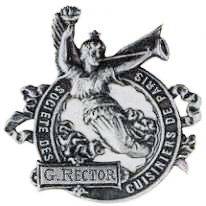 I’ve long been aware of Rector’s restaurants, but I became interested in George’s career recently when I acquired his 1939 cookbook HOME AT THE RANGE WITH GEORGE RECTOR. It is sprinkled with asides such as one that extols the merits of wooden salad bowls that are gently wiped, never washed, after each use.

As the son of a premier restaurateur, Charles Rector, George was born with a silver spoon in his mouth. Charles was the originator of highly successful restaurants. Rector’s Oyster House opened in 1884 serving seafood to eager Chicagoans. It was so popular that the restaurant was doubled in size in 1891. Next, Charles operated Rector’s Marine Restaurant at the 1893 Chicago World’s Fair. At the end of the 19th century a Rector’s was established in New York, on Broadway at 44th street, soon becoming one of the city’s top showplace dining venues.

His father sent George to Paris to learn the trade around 1900 and, he writes, to “buy, beg, borrow or steal from Hippolyte Arnion of Café de Paris fame, the recipe for Sauce Mornay.” Upon his return, he worked with his father, introducing French dishes at Rector’s. But in 1909, due to a spat between the two men, George opened a competing Broadway restaurant he named Café Madrid. Shortly later he sold his interest in that restaurant and rejoined his father in a new venture, Hotel Rector, on the site of the former Rector’s, designed by Daniel Burnham and outfitted with luxurious dining rooms.

The hotel failed after three short years, allegedly because of the “bohemian” reputation it had unfairly acquired through its presumed association with a racy play called The Girl from Rector’s. George then joined with a new partner in yet another restaurant called Rector’s, also on Broadway, that closed in 1918 with the stirrings of Prohibition.

The history of all four New York Rector’s has been expertly detailed by Henry Voight, who also provides and interprets menus from the restaurants.

In 1926 George turned up at a fifth Rector’s, this one in Florida. Advertisements for “The Original Rector’s, “Miami’s Restaurant of Distinction,” claimed it was under his personal management. Not for long, though. The following year he returned from a tour of Europe, declaring upon his arrival that he would never open another restaurant. He added that “America is becoming a one-armed lunchroom, a place where people wolf their food.” That year, 1927, he published his first book, THE GIRL FROM RECTOR’S, based upon essays he had written for the magazine Saturday Evening Post.

The book was shortly followed by another, the self-published RECTOR COOK BOOK. A year later, in 1929, he was reported to be director of cuisine for a railroad, as well as a lecturer on food and cooking. In 1931 he told students at Cornell’s School of Hotel Administration that because Europeans were no longer coming to the U.S., “The quality of American cooking has declined.”

In 1934 E. P. Dutton & Co. published DINE AT HOME WITH RECTOR, with a subtitle that reminds me of James Beard (as does George’s product touting): “A Book on What Men Like, Why They Like It, And How To Cook It.” 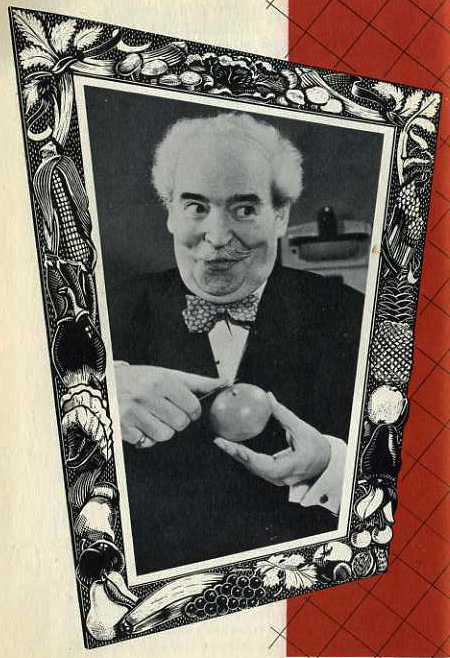 Through the 1930s and through World War II, George worked for a number of advertisers as a traveling lecturer, radio personality, and author of sponsored newspaper food columns such as “Tricks with Chopped Meat” for A&P food stores in 1936. He was a guest of A&P’s radio program Our Daily Food as well as a food tester for the chain. A&P also sponsored his third book A LA RECTOR. In 1937 his smiling face, commonly used in advertising with tag lines such as “Formerly the Proprietor of the World Famous Rector’s,” appeared in an advertisement for Phillips Delicious Soups. 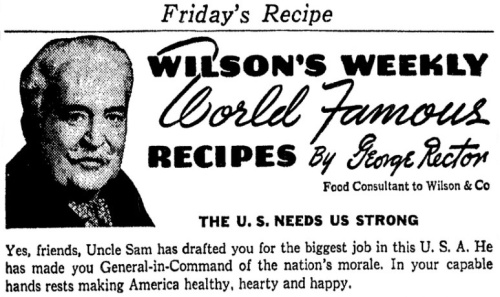 In 1939 he published two books, the one I acquired (sponsored by Gas Exhibits, Inc.) and also DINING IN NEW YORK WITH RECTOR, a restaurant guide occasioned by the New York World’s Fair. About then he took on a new client, Wilson & Co., producer of meat byproducts such as lard and beef extract, and canned meat called MOR.

I’m left wondering how the same man who was quoted in 1929 saying, “It is a pleasure to me to talk to people who appreciate good food and who realize that cooking is one of the fine arts.” could also say that B-V beef extract was “The most useful cooking ingredient I have ever known.”