That night at Maxim’s 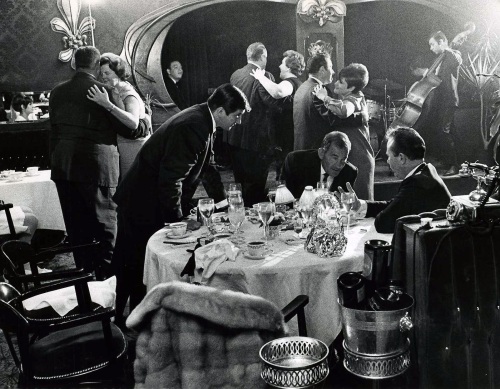 A restaurant is an expression of its time and place. Except for fast food franchises which are based on an industrial mode of mass production detached from local particularity. So when a replica of an art nouveau turn-of-the-century culinary haunt of demimonde Paris shows up in the basement of a hotel on Lake Michigan’s gold coast in the mid-20th century – well, it’s a little strange.

In short, was the Paris-based Maxim’s franchise that arrived in Chicago in 1963, with its undulating woodwork, fleur-de-lis lights, red velvet banquettes, Soles Albert, and Poires Helene, the real thing?

I’ve been pondering this question as I’ve pored over the fascinating photograph above, which was taken by prize-winning photographer Gary Settle, probably for The Chicago Daily News.

What was the occasion? It’s not a casual shot. At least two floodlights are in evidence and there is something stagey about the scene. I suspect the couples were asked to leave their coffee and smokes and get up and dance. Unfortunately, in the process two napkins were flung aside in an unsightly manner. Elegance is so hard to achieve.

The Brylcreemed man leaning over the table must be Chef Pierre Orsi who had very recently arrived from Paris to take command of the kitchen. The man seated to the right of him looks as though he could be French, but the other men in the picture, apart from the musicians, appear to be of German ancestry. I wonder if they might be two sets of twins.

Which of the women owns the sable coat and elbow-length black gloves? I believe it is the blissful dancer on the left. She will carry home leftovers in a foil purse-shaped doggie bag — perhaps she is dieting or didn’t love her Calves Liver with Raisin and Grape Sauce so much.

The table has a center lamp with pink silk shades and coffee cups bearing Maxim’s curlicue M logo. A cigarillo rests in one of the souvenir ashtrays, while others have been used by the table’s two Winston smokers who prefer a fliptop box to a soft pack. Did these eight people really polish off four bottles of champagne? Did anyone use the replica antique telephone to check in with their babysitter?

I invite readers to create a scenario. Who are these people and what were they thinking at this moment in September, 1967?