Montmartre in Paris was the birthplace of what would come to be known in the U.S. as the theme restaurant. In the late 19th and early 20th centuries, Parisian entrepreneurs conjured up fantasy atmosphere in strange and unsettling forms. Themes included assassination, imprisonment, death, hell, and that harbinger of bad luck, the black cat.

As much devoted to drinking and entertainment as food, Montmartre’s ghoulish restaurants, cafes, and cabarets inspired Americans to duplicate them. Needless to say, both in France and in America such places were heavily geared to tourists and considerably short of good taste.

One Paris establishment, the Cabaret du Néant, deliberately transgressed the boundaries of decency serving wine in skulls (thankfully artificial), using coffins for tables and x-rays to turn patrons into skeletons, and – worst of all, in 1915 – digging trenches in the backyard so patrons could experience World War I warfare conditions while dining by candlelight.

In 1896 the Cabaret du Néant, renamed the Restaurant of Death, had been recreated in the Casino in New York’s Central Park, right down to a candelabra made of “skulls and bones.” 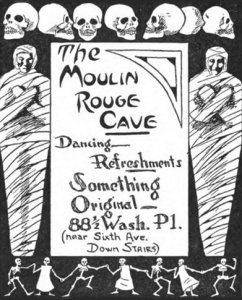 Greenwich Village’s Moulin Rouge used coffins and skulls in its advertising, though whether it carried the theme over to its interior is unknown. It was padlocked in 1924 for serving liquor illegally. Columbus OH had a nightclub known as The Catacombs in the Chittenden Hotel [at top of page] but I was not able to learn anything about it other than that it was doing business in 1941.

On the whole, black cats and jails gained greater popularity in the U. S., both themes inspired by Montmartre. New York City’s Black Cat had many lives [shown above], being declared dead with regularity and then reappearing. San Francisco also had a Black Cat, opened in 1911, but it sounds as though it was quite tame, filled with ferns and potted palms and an orchestra hidden behind a screen. Perhaps another Black Cat Café in San Francisco, or maybe this one transformed, operated from the 1930s into the 1960s as a center for bohemians and beats as well as a gay clientele.

As sinister animals go, rats and bats were also celebrated. Greenwich Village’s café, The Bat, was said to have a “macabre interior” similar to Paris’s famed Le Rat Mort (The Dead Rat). It’s likely that the advertising of both made them out to be far more sinister than they were.

As for jail restaurants and cafés, they were fairly numerous in this country. The first, labeled dungeons, opened in New York City and were places where patrons sat on crude boxes in cellars and ate steaks with their hands. They were particularly popular with men’s groups and conventioneers. In the 1920s and 1930s, restaurants and drinking places with jail themes, often with servers dressed as jailers or prisoners, appeared in Los Angeles, Indianapolis, and even a small town in Iowa. Strangely, San Francisco’s Dungeon restaurant of the 1920s, complete with cells and wardens, etc., served waffles rather than steak. But then sometimes it’s hard to keep themes on track.

I’ve been working on a future post on truly scary restaurants, ones where outbreaks of food poisoning have occurred.

Meanwhile, whether or not you find a spooky restaurant to hang out in for Halloween, have a good holiday!

Helen and Warren liked eating in restaurants in the early 20th century when it was a rare experience for most Americans. They kept up with the trends and they tried restaurants of every format. They were affluent New Yorkers, somewhat jaded and always seeking the new thing.

Helen wanted to avoid expense and ostentation but was uncomfortable in offbeat places. Warren was cynical and alternately a cheapskate or big-spender. Both were distrustful. They feared they’d be taken advantage of, and sometimes were.

In the 1920s Helen and Warren were the best known couple in the U.S.A.

But they were fictional. They were the creation of Mabel Herbert Urner who wrote a column about the pair for over thirty years, from 1910 until the early 1940s.  The column was widely syndicated in newspapers from Boston to Los Angeles as well as in Canada and England. Though fiction, the column presents a fascinating subjective view of dining out, particularly in the 1910s and 1920s.

Helen’s and Warren’s experiences likely had some resemblance to Mabel’s own life, particularly when the couple visited restaurants in Paris, London, and other European capitals. After marrying rare book dealer and collector Lathrop Colgate Harper in 1912, Mabel traveled with him around the world. In New York they lived in an apartment at 1 Lexington Avenue across from Gramercy Park from which they surely forayed into restaurants regularly.

Did Mabel and Lathrop, like her famous pair, have a preference for out-of-the-way restaurants such as the French and Italian tables d’hôtes in NYC? One starlit summer night in 1913 Helen dragged Warren to a backyard café run by three sisters. Helen exclaimed “Why, it’s a bit of Paris!” when she stepped into the garden. They were surrounded by writers, artists, and illustrators, including a “queerly dressed” literary woman. (Mabel’s inside joke?) Warren, a successful businessman, scoffed at the artists but even he had to admit afterward, “That [was] the best dinner in New York for the money.” They paid 65 cents each for soup, beef tongue with piquant sauce, squab, and salad, finished with fresh pears, Camembert, and coffee – wine included. The café was clearly modeled on that run by the Petitpas sisters on W. 29th in conjunction with a boarding house where artist John Butler Yeats lived. A dinner with Yeats and friends about this time was memorialized in a painting by John Sloan. 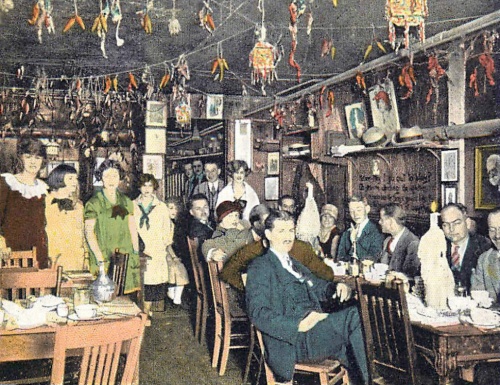 The Petitpas dinner was one of the couple’s few positive experiences. As much as Helen was drawn to offbeat restaurants, she was often squeamish about unsanitary conditions. She refused to eat ground meat. Usually she wiped her silverware with her napkin. She had problems in a Chinese restaurant, an Italian place, an “anarchist restaurant,” probably Maria’s, as well as at the Pink Parrot in Greenwich Village (probably the Pepper Pot, shown here). When she pushed away her plate there, Warren reprimanded her, saying, “You’re a bum bohemian.”

Helen and Warren visited cafeterias, tea rooms, pre-war cabarets, hotel dining rooms, roadhouses, and shoreline resorts in the NYC metro area. Helen was often embarrassed by Warren’s behavior when he showed off or spent too much money. They bickered. He declared a tea room she liked “a sucker joint.” She was critical of the decor and pomp of expensive restaurants, but her attempts to put a brake on Warren’s spending often backfired.

In 1913 they went to a restaurant in the throes of a waiters’ strike. Somewhat surprisingly, considering the bourgeois lifestyles of both Mabel and Helen, the story presents a case for the strikers. Helen questions their server about the goals of the strike, and he says, “They want decent food, m’am; clean food and a clean place to eat it. They want to be treated like men – not dogs! And they want a living wage.” Warren asks about tips and the waiter replies, “Why does he have to depend on tips thrown at him?”

In many ways Helen’s and Warren’s restaurant adventures and complaints seem relevant today. Has it happened to you that a server tries to remove your meal in progress? Have you been charged extra for bread? Welcome to the 1910s.