Restaurant reservations are mainly a 20th century innovation, and yet for the best of customers tables have always been available, no reservations required. A visitor to a Chicago hotel noted in 1888 that a nearby table had chairs tipped, a sign that it was reserved. A number of business men led by packing house magnate Philip Armour walked in and sat down. “Waiters scurried to serve them, and in a twinkling they were attacking their thick steaks as if the meal were a business problem to be solved immediately,” the onlooker recorded in her diary.

It was a common practice to save tables for prominent business men who gathered at the same table daily. In cities with numbers of German-American settlers, such as St. Louis and Washington D.C., the table was known as a Stammtisch and the diners as Stammgäste. At a restaurant in St. Louis conducted by Detlof von der Lippe, tables in alcoves were reserved for different professions. An inset in the 1906 postcard below shows an alcove named The Grind Stone. In the background is The Roost, reserved for tailors, while lumber men sat in The Hoo-Hoo. Which profession met in The Grind Stone is anyone’s guess. 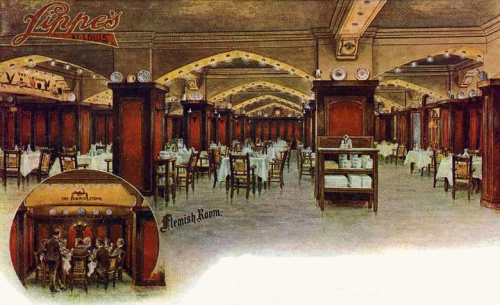 As late as 1957, Harvey’s and the Occidental restaurants in D.C. kept tables for regular groups, as did others in that city. A table at La Salle Du Bois was reserved on Saturdays for businessman Milton S. Kronheim and his “Saturday 12″ composed of Congressmen, civic leaders, and judges. Richard Nixon, then VP, reserved a table there during the week for cabinet members and White House staff.

Of course luxury restaurants such as the Colony automatically reserved tables for wealthy and celebrity regulars too. For them, as for business groups, the rule was that if the party did not arrive within 15 to 30 minutes of their usual schedule, the table would be given to someone else.

If saving tables for the toffs is a longstanding practice, so is resentment by the public when told no tables are available even as they gaze upon a dining room with empty spaces. The problem intensified as taking reservations became more common in the early 20th century with the spread of telephones in restaurants. [1913 advertisement]

Reserved tables have often implied to people without them that they were being snubbed and regarded as inferior. And in the case of Afro-Americans this was literally the case. No matter how well dressed, how well mannered, how able to pay, they were likely to be told no tables were available.

Although many Northern states had enacted civil rights laws in the 1880s when the South was instituting segregationist Jim Crow laws, they were rarely enforced. However, an 1889 case in Michigan stands out because of the appeals court judge’s decision for the plaintiff who had been told he could be seated only at a table in the back reserved for Black patrons at a restaurant in Detroit. Usually things did not work out so well. In the 1920s a Chicago restaurant discontinued taking reservations by telephone after they discovered that a women’s club who had booked tables for 40 was Black. Even the federal Civil Rights Law of 1964 failed to eliminate discrimination. Activist Dick Gregory and others were turned away at an empty restaurant in Tuscaloosa AL in 1965 when the hostess showed them a reservations list with 1,000 names on it.

Whose interests do reservations  primarily serve – the restaurant’s or the guest’s? This is a tricky question, but on balance I’d say restaurants are providing a service that is mostly in the guest’s interests. Although it benefits restaurants to have an idea of how many are coming to dinner, in terms of staffing and provisioning, there are also drawbacks. A popular restaurant may actually lose money by taking reservations because tables are not constantly producing revenue throughout a busy mealtime. With reservations, tables are bound to sit empty between guests. What’s worse, a percentage of reservations will not show up nor call to cancel, despite a restaurant’s telephoned confirmation or penalty charges.

The no-show problem developed into a major headache for restaurants in the 1980s. Restaurants that normally got a lot of tourists and sporting event fans suffered the most, and some reported they went into the red on nights when up to 30% of reserved tables went unfilled. It comes as no surprise, therefore, that so many popular dinner-house restaurant chains take no reservations on busy nights. As long as there are plenty of guests willing to wait up to an hour and a half, the decision is 100% rational. Most of these restaurants – such as the Cheesecake Factory – hand out pagers that permit people to stroll around or go shopping until they are buzzed, a system that came into use in the late 1980s.

For those of us who prefer to go to restaurants that still take reservations comes the dawning realization that we are very likely paying a premium for the privilege. And soon we might be paying for the reservation itself, according to a recent story in the Atlantic.