Carhops in fact and fiction

The word “carhop” is almost certain to bring to mind a teenage girl dressed in a brief costume, possibly on roller skates. Ever since the George Lucas movie American Graffiti in 1973, the female carhop has become an icon. She is an object of nostalgia, even for those too young to have experienced drive-ins with carhops.

It’s not certain when she appeared on the scene. Curb service, usually for soda fountains in pharmacies, goes back to the turn of the 20th century. Usually boys were hired to rush orders while the driver of a car, or horse-drawn wagon, waited impatiently along the curb in front. In the 1920s Pig Stands selling sodas and sandwiches in Texas offered the same service. The Hot Shoppes also came along in the 1920s. In 1931 they advertised in Washington, D.C. for “girls for tray service.” In 1933 a Miami Beach drive-in looked for an “attractive curb waitress.” 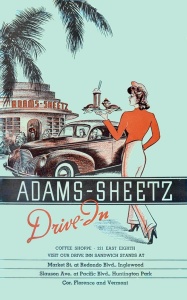 By the late 1930s teenage girls and young [white] women (25 at the very oldest) were commonplace in Texas and California drive-ins and were the subject of quite a bit of turmoil. They worked long hours, often until late at night. In many cases, they not only delivered sandwiches to customers, but also beer, sometimes working for drive-ins that were more tavern than restaurant.

Issues surrounding female carhops came to a head in Texas and California in 1940. In January California’s chief of the Division of Industrial Welfare ordered 30 drive-ins to pay carhops the state’s legal minimum wage for women which was $16 a week. The drive-ins reacted negatively, being accustomed to paying no wages at all – carhops worked for tips only — as well as charging carhops for uniforms and meals. The Industrial Welfare head, a woman, threatened to arrest drive-in operators who failed to comply.

Meanwhile, in Texas the press was aglow with publicity about its carhops in LIFE magazine. The magazine’s cover showed an attractive teen dressed in a drum majorette outfit with what were then considered very short shorts. Stories in the Dallas press about carhops at that time were flippant, like one about the couple thrown out of a surrey. The sheriff, the story related, said “the horse probably had shied at the girl carhops in shorts who are employed at a near-by beer tavern.”

Although the drive-in featured in LIFE was in Houston, I wonder if all the publicity generated by that story was responsible for the blossoming movement of Dallas women who objected to carhops dressed in “scanties.” One letter-to-the-editor charged that if drive-in owners had to rely on “cheap chorus comedy cavortings” then the carhops “should be paid show house wages.” But when another letter writer suggested male carhops should also be dressed in short shorts and boots, the drive-in burlesque heated up as a few roadside places complied, attracting mobs of women. [illustration shows carhop interview] 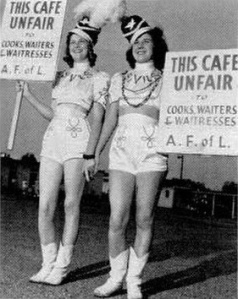 Over time the campaign for modest dress for carhops met with more success than did the attempts to win wages for California carhops, or to unionize carhops in Dallas. In Texas, the state Restaurant Association denounced skimpy outfits and declared bare skin a violation of the state’s sanitary laws. The public, led by women and church leaders, grew more supportive of reform. With drive-ins in Houston and Dallas, one of the state’s largest operators, Sivils, agreed in 1942 to abandon shorts and bare midriffs for knee-length skirts and waist-long jackets. Other drive-ins followed their example, many dressing carhops in blouses and slacks. Meanwhile, drive-in owners in California went to court for a permanent injunction against the minimum wage order issued by the Industrial Welfare Commission. A judge ruled in their favor after they brought in more than a dozen carhops who testified they made from $25 to $70 a night in tips. A campaign to organize carhops at Sivils in Dallas likewise met defeat. Although the carhops voted for unionization, demanding a salary of $3 a week, a daily meal, and free uniforms, Sivils flatly rejected their vote.

In the course of the struggles new facts about carhops emerged. Far from carefree many of them were parents who, even if married, needed to work to support their families. A bitter letter testifying to this appeared in May, 1940, signed “two former carhops.” The women wrote that carhops dressed in shorts and grass skirts “are at least coming nearer to making a living wage than at any other time of their existence” while the women who complained about their outfits did not have to work for a living. They argued that without big tips, some carhops would become streetwalkers. 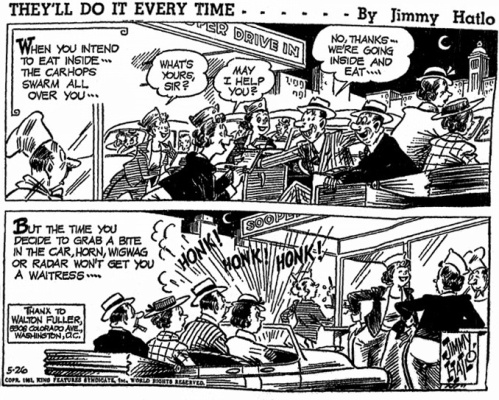 Big tips or not, serving customers in cars could be a trying experience, and the turnover rate among carhops was high, with many lasting only a few weeks. A 1957 column in Drive-In Restaurant, a trade magazine, revealed how carhops characterized customers: The Food Refuser, The Horn Blower, The Souvenir Seeker, the Breakage Fiends, The Deadbeats, The Wolves. As the last implies, attention from men was not always enjoyable, and sometimes it was dangerously hostile. In 1953, there was an instance of boys driving by a drive-in pelting girl carhops with gravel in Sacramento CA. A few carhops even met their deaths from obsessed customers.

By the mid-1950s, some drive-ins looked for ways to speed up service with automated ordering, usually from intercoms mounted on poles. Carhops’ only job then was to deliver food. Other drive-ins eliminated car service entirely, requiring customers to walk up to a window to order their food and carry it back to their car. When Ray Kroc took over the McDonald brothers’ drive-ins, he continued their practice of walk-up service. In the late 1950s Kroc reportedly attributed his company’s expansion to “no tipping, no jukebox, and no carhops.”

Although drive-ins with carhops can still be found today in some places, elegies for them began in the 1970s, American Graffiti being a prime example. Carhop fiction is more entertaining, but recognizing the difficulties carhops experienced in doing their jobs is, in my opinion, a better way to acknowledge them.