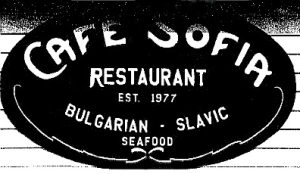 In 1985 an eminent cultural geographer, Wilbur Zelinsky, published an article on American ethnic restaurant cuisines. In it he said that the foods of some places stirred little interest in the U.S., among them Great Britain, Ireland, Scandinavia, Belgium, the Netherlands, and Germany.

And he wrote that he had never found a single Bulgarian restaurant in metropolitan North America.

Actually, though, there were a few Bulgarian restaurants — either in the sense that they served Bulgarian dishes or at least were run by Bulgarian-born proprietors. From 1910 through the 1960s I’ve found at least one Bulgarian restaurant or café in St. Louis MO; Anaconda MT; Indianapolis IN; Midland and Allegheny PA; Niagara Falls and NYC; Portland OR; Los Angeles and San Francisco CA; Seattle WA; Hillsdale & Kalamazoo MI; and in Cincinnati, Youngstown, and Toledo OH.

However, they might not meet Zelinsky’s definition. He considered a restaurant ethnic only if it predominantly served people not belonging to the ethnicity the restaurant represented. It’s true that there have been very few of those, and most of them after 1985. Also, I cannot be certain that restaurants owned by those born in Bulgaria always served Bulgarian cuisine, especially after the 1940s.

It’s likely that the customers of early 20th-century Bulgarian-owned restaurants were fellow countrymen. The majority of the Bulgarians in this country before WWII were men. Many lived in cheap hotels and rooming houses while working as laborers for railroads, steel mills, meat packing houses, and coal and copper mines. I ran across a want ad looking for a woman to cook meals for a group of Bulgarian men, but eating in restaurants was probably the fate of most single Bulgarian men.

Like the Greeks, Bulgarian restaurant and lunch room operators didn’t always get a warm welcome. A case in point was Racho Evanoff who was among those denied a soft drink license by authorities in Portland OR in 1921 on the grounds that they were suspected of using soft drinks as a cover for liquor sales. The newspaper didn’t mince words in a story about bootleggers in the city’s north end who it referred to as “liquor banditti from mid-Europe.” It identified them as “aliens” from Austria, Dalmatia, the Slavic nations, Roumania, Greece, and Bulgaria. However, Evanoff evidently escaped the curse over time. He renamed himself Robert and in 1927 his restaurant was still in business with a rating of “excellent” from the health department.

Saying just what is and what isn’t Bulgarian cuisine is not easy, particularly since Bulgaria is a multi-cultural country, but it resembles the food of other Balkan countries. A 1924 story about a Bulgarian restaurant mentioned lamb stew, eggplant, okra, and chicken soup seasoned with lemon. I haven’t been able to find a restaurant menu but have read about the types of food served in Bulgarian restaurants in restaurant reviews and advertisements. Examples include cured sausages, grilled meats, pierogi, shish kebab, moussaka, stuffed grape leaves, yogurt, chopped lettuce salads with feta cheese, and baklava. In the U.S. the cuisine in Bulgarian restaurants seems to have been similar to that of Greek restaurants that served other than American dishes.

After the second World War it looks like the few Bulgarian restaurants and cafés in business then gained a wider range of customers, partly by including on their menus more familiar American dishes such as barbecue, fried chicken, and steaks. A restaurant operator in Los Angeles went from coal miner to lunch wagon operator, and then succeeded in building up a small chain of BBQ Pete’s in the 1940s and 1950s. In 1950s Cincinnati Daniel Boteff, who had formerly run a shoe repair shop, opened a couple of Bulgarian restaurants [pictured above and right, 1956] serving Shish Kebab Dinners for $2.25, along with BBQ Chicken, Fried Chicken and “Boteff’s Cut” Sirloin Steaks. He advertised in 1957 that his restaurant was one of very few restaurants in the US serving “authentic Bulgarian foods.”

It’s my impression that today there may be slightly more Bulgarian restaurants though they still remain rare.