Why the parsley garnish?

Nothing decorated more restaurant plates in the 20th century than parsley, most of it by all accounts uneaten.

Why use so much of what nobody wanted? The best answer I can come up with is that parsley sprigs were there to fill empty spaces on the plate and to add color to dull looking food.

Parsley was not the only garnish around, but it has probably been the most heavily used over time. It has shared the role of plate greenery with lettuce, especially after WWII when lettuce become readily available, and to a lesser extent with watercress.

Parsley has long been a favorite in butcher shops where it is tucked around steaks and roasts. As early as 1886 restaurants were advised to emulate butchers and decorate food in their show windows with “a big, red porterhouse steak, with an edge of snow-white fat, laid in the center of a wreath of green parsley.” By the early 20th century, almost the entire U.S. parsley crop, more than half of which was grown in Louisiana and New York, went to restaurants and butchers. By 1915 parsley sprigs were a ubiquitous restaurant garnish that many regarded as a nuisance. Diners sometimes suspected that the parsley on their plate had been recycled from a previous customer.

While European chefs use garnishes as edible complements to the main dish, Americans have focused primarily on their visual properties. 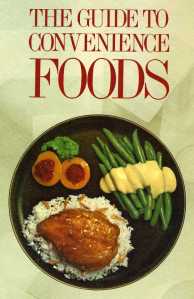 Around 1970 when convenience foods invaded restaurant kitchens, garnishes took on heightened significance in jazzing up lackluster, monochromatic frozen entrees. In the words of Convenience and Fast Food Handbook (1973),“The emergence of pre-prepared frozen entrees on a broad scale has revived the importance of garnishing and in addition, has led to innovative methods of food handling, preparation and plating. If an organization is to achieve sustained success in this field, emphasis must be placed on garnishing and plating. These are the two essentials that provide the customer with excitement and satisfaction.” [partial book cover shown above, 1969]

The head of the Southern California Restaurant Association admitted in 1978 that he hated to see all the food used as garnishes go to waste in his restaurant, including “tons” of lettuce. But this was necessary for merchandising, he said: “We have to make food attractive. It’s part of the cost of putting an item on the table.” It was – and is – probably true that an ungarnished plate such as shown here looked unattractive to most Americans. 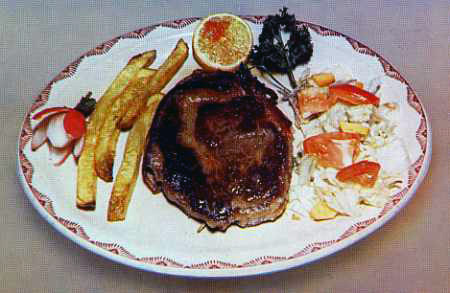 So many garnishes decorated food in American restaurants in the 1970s that food maestro James Beard got very grumpy about it, calling it stupid and gauche. He could allow watercress with lamb chops or raw onion rings on a salad, but put a strawberry in the center of his grapefruit half and he was outraged. Next to orange slices and twists, his most detested “tricky” garnishes were tomato roses and flowers. Funny that he didn’t mention radish roses such as the one shown above.

14 responses to “Why the parsley garnish?”