Peas on the menu

I read a story on dining-out trends a few days ago that said, “We’re ordering fewer peas …” Of course! I can’t remember when I last ordered peas in a restaurant. Never, I suspect. Plates often come adorned with little piles of grilled asparagus, or maybe julienned carrots and zucchini, but peas? No.

Admittedly, even at this moment, someone could be serving up peas in the pod in a trendy farm-to-table restaurant somewhere in Westchester County or in California wine country, but other than these outlier examples, I ask, how many peas have been served in restaurants in the last several decades? Very few, I’d bet.

Yet, strangely enough, once upon a time they were the darling vegetable of elite restaurants and hotel dining rooms. At Boston’s luxury hotel, Tremont House, an 1843 menu listed “Les Petits Pois à la Parisienne.” Small, tender, bright green peas imported from France were considered a delicacy, and were expensive. American canned green peas came on the market in the 1850s, but it took so many hands to pick and shell them that they too were expensive, yet not considered good enough to displace the popularity of the French imports. 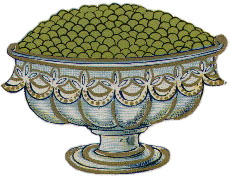 French peas continued to reign even in lesser eating places, often appearing on holiday menus at hotel dining rooms across the land. For example the Rankin House in Columbus GA featured French Peas for Christmas dinner in 1887, along with choice dishes such as Oysters on the Half Shell, Green Turtle Soup, and Tenderloin of Beef with Mushrooms.

In that same year, though, an alarm was raised about the wisdom of eating imported French peas. Their bright green color was produced by adding copper sulfate, warned critics who said this was toxic, fatal if taken in big enough doses. Evidently the warnings did not impress many people because French peas continued to be served in fine restaurants. Loud cries to ban their importation were not heard until after the American invention of a machine that would both pick and shell peas in 1893, thus bringing down their cost to consumers.

In 1906 many states passed pure food laws that made it illegal to sell French peas colored with copper salts. In Idaho the state’s Pure Food Commissioner confiscated 72 cans of imported French peas found in a hotel and destroyed them by punching holes in the cans and pouring kerosene over the contents.

French peas appeared on menus after that, but it’s likely they were grown and canned in the US. “Petit pois” was the name adopted in this country for the smallest size pea, 9/32-inch in diameter. In the 1940s, 1950s, and 1960s, French Peas on a menu continued to suggest luxury or a special occasion such as Mother’s Day or Thanksgiving. Green Peas, Garden Peas, and June Peas, on the other hand, suggested freshness and nutrition, but not luxury or style. They were exactly what a diner expected to see filling in the blank spaces on a dinner plate at Howard Johnson’s.

In the last several decades I believe peas have vanished from menus. When was the last time you had peas in a restaurant?

11 responses to “Peas on the menu”