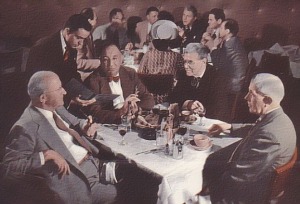 The modern idea of eating out revolves around choice. Where shall we go? What shall we order? We are looking for change, novelty. We want to vary our routine.

It hasn’t always been this way.

Choice in dining out did not become the norm to any great extent until the second half of the 19th century, and then slowly and incompletely. Before that patrons were divided into “regulars” and “transients,” with the first category making up the backbone of the fledgling restaurant business.

In early American taverns the regulars were male groups such as firemen, clubs, or religious societies who turned up on a scheduled basis and were served group meals for a prearranged price. To put it in other words, much of the business of a tavern or eating house was conducted on a catering basis. Male college students, in the decades before dormitories and dining halls, grouped together in dining clubs that operated similarly.

By the 1870s restaurants filled with the same old people eating the same old food day after day came to be regarded as somewhat archaic. A visitor to a chop house in lower Manhattan that served steaks and baked potatoes observed patrons who, curiously, “did not give any order.” He reasoned that they were habitues and learned that one, a dry goods merchant, “has dined there every day for the last seventeen years.” 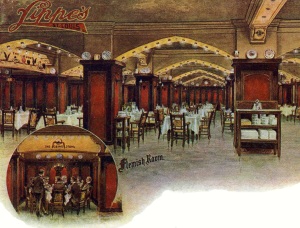 The system of regular diners and regular meals worked effectively during an era when there was not a large dining public like today. But even by the time things had changed significantly, in the early 20th century, many small cafes tried to take the guesswork and risk out of their business by cultivating regular customers. They sold meal tickets for which patrons paid in advance for a number of meals in order to receive a discount.

Even today there are probably still some individuals who would rather eat at the same place on a frequent, even daily basis. There are those who order the same thing every time or are automatically served the day’s special without even glancing at the menu. Is there an invisible straight line in NYC connecting the 1859 eatery where “regular patrons at the sandwich counter merely sit down and their sandwich is placed before them” and The Colony, where in the 1950s a woman was enjoying her 28th year lunching on lamb chops, salad, and grapefruit? Likewise in that same decade regulars at a Mississippi City restaurant were fond of sitting down and telling the proprietor, “Joe, fix us up.” 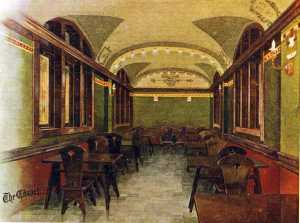 Another vestige of the old system that lingered on for decades was that of men’s professional groups who ate together regularly at the same restaurant – and the same table – for years on end.  Around the turn of the century insurance adjustors — members of the Firebug Club (whose name commemorated the olden days when adjusters colluded with policyholders to commit arson for profit) – used to meet at Mike Lyons’ in NYC’s Bowery. About the same time St. Louis’s Lippe’s was set up with alcoves for trade groups. There was a “Hoo-Hoo” decorated with a painting of a black cat that was designated for lumbermen, and another called “The Roost” decorated with a goose and other birds, meant for tailors. Might “The Chapel” have been intended for ministers? The tradition continued into the 1940s at the century-old Speck’s in that city where there was a bankers’ table, a doctors’ table, etc.

Journalists were well-known for socializing together in restaurants. In Chicago, Ric Riccardo hosted correspondents for the major national magazines and newspapers in his restaurant’s imitation jail called the Padded Cell in the early 1950s. By the 1970s the room had become dedicated to the weekly luncheons of the St. Louis Browns fan club. 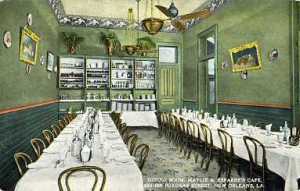 Restaurants highly esteemed their regular patrons, none more so than Maylie’s in New Orleans, which closed its doors in 1920. The all-male restaurant admitted patrons each day at 11:00 a.m. and 6:00 p.m., seating them at long communal tables. When a regular died, his chair was left empty for several days.