Toast wasn’t really new on restaurant menus around 1914 but it was beginning to enjoy a bigger vogue. The soda fountain, often located in drug or department stores, was expanding into a lunch counter and as it did it added electric toasters to its battery of equipment. Most Americans still lacked electricity in their homes at this time so toast was something of a treat to them. By 1923 a new type of sandwich place, the luncheonette, had caught on. At the Tasty Toasty Luncheonette in New Haven a diner could almost certainly order a toasted cheese sandwich, an item once found only in English-style chop houses way before the Civil War.

Considering that restaurants in the early 19th century laboriously toasted bread by turning it slowly over an open fire, it is surprising that it was offered at all in those days. And yet Mrs. Poppleton, a versatile New York restaurateur, pastry cook, and confectioner, advertised in 1815 that she would provide refreshments such as savory patties, mock turtle soup, and anchovy toasts between 11 a.m. and 3 p.m. each day. Beyond being an accompaniment to eggs, toast also did service in many an eating place as an edible prop for such foods as quail, creamed chicken, or asparagus. Buttered toast floated in oyster stews and bowls of milk (“milk toast”). World War I put a temporary end to its sidekick role when the Food Administration ordered restaurants to conserve wheat by not using bread as a garniture. 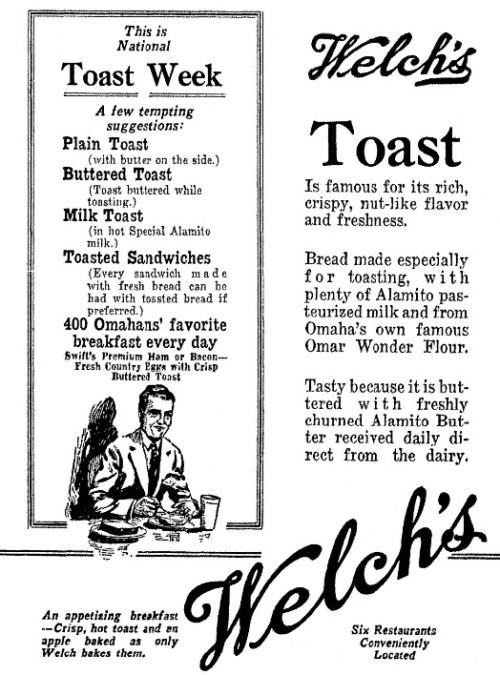 After the war toasters stayed perpetually busy in luncheonettes. An Omaha chain of lunchrooms advertised “National Toast Week” in 1923. The R and C Sandwich Shops boasted in 1925 that “Our big double-deck special toast sandwiches are the talk of Chicago.” The following year there was a special demonstration on how to make toasted sandwiches at the National Restaurant Association convention. 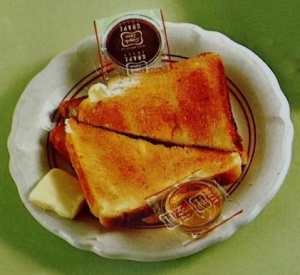 The novelty of toast wore off over time until the cheap steakhouses that sprang up in the early 1960s revived it. Their dinners of sirloin steak, tossed salad, and baked potato came with garlic toast (called Texas toast when made of double thick bread), all for the magic price of $1.19.

Today toast can still be found filling all its historical restaurant roles, with the exception of milk toast which has been replaced with milk and cereal. But its leading role is perhaps in the club sandwich. As a 1960 restaurant trade magazine observed: “The dry, crispy consistency of toasted breads improves flavor and appearance, and also makes the customer feel he is getting a more exclusive product.” This, the article noted, allows toasted sandwiches to be priced a bit higher than plain ones.