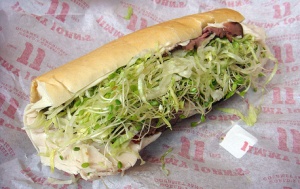 Last week my brother found the following curious notice in his local newspaper offering aggrieved consumers a free pickle, cookie, or soda (valued at $1.40). The offer was the result of the settlement of a class action lawsuit by a woman who failed to get sprouts on her sandwich as a Jimmy John’s menu had promised.

I could not help but appreciate that the claimant was a resident of California, the state that originated Truth in Menu laws (aka Truth in Dining) that demand under penalty of fines that restaurants provide exactly what is stated on their menus.

Menu advertising is covered under a variety of consumer protection laws but many people have felt that restaurants’ misrepresentations deserved more focused attention. Ralph Nader, from a restaurant family himself, may have been the first to call for a Truth in Menu law, in 1972. The first attempt to enact such a law, in the form of a city ordinance, came in San Francisco in 1974 under the sponsorship of then-president of the Board of Supervisors, Diane Feinstein (US Senator, D-CA).

The impetus behind the San Francisco ordinance was to stop restaurants from serving convenience entrees that had been prepared elsewhere, frozen, and reheated in the restaurant, yet were not identified as such and leaving diners to believe they originated in the restaurants’ kitchens. Also at issue were the restaurants at Fisherman’s Wharf that purported to serve locally caught fish yet were known to substitute frozen fish shipped in from other states. Restaurant owners such as Tom DiMaggio, brother of baseball’s Joe DiMaggio and owner of DiMaggio’s Restaurant, argued that they had to fall back on frozen fish at times when fresh caught local fish was not available. DiMaggio admitted to serving frozen prawns from Louisiana. Proponents of the Truth in Menu law, however, claimed that some of the Wharf’s restaurants regularly served nothing but frozen fish.

San Francisco’s Board of Supervisors chose not to pass the ordinance, but Los Angeles took up the cause and became, probably, the leading enforcer of menu honesty. Other states and localities also adopted such laws but their enforcement has tended to be weak. The 1970s was the high point for restaurant inspections and TiM enforcement. Fines were issued for margarine referred to as butter, Maine lobster not from Maine, real maple syrup that wasn’t, frozen entrees touted as home-made, 8 oz prime steaks that weighed less and were lower grade, chicken and veal dishes made of turkey or pork, and fish that wasn’t what its name implied. As “home-made” became “home-baked,” restaurants learned to play it safe with their claims, as the postcard image above shows. Menu printers did a brisk business.

The use of frozen entrees eventually became an accepted practice in many restaurants as consumers happily accepted dishes prepared in a factory and microwaved in the restaurant’s kitchen. Restaurants are not required to acknowledge that they serve frozen entrees (as the Feinstein ordinance would have required), and many customers would not be horrified if this was revealed, feeling that as long as it tastes good and costs less than food made on-site from scratch, that’s fine with them.

Where do things stand today? Restaurant chains are the most likely targets for lawsuits and have been diligent in avoiding false claims. Elite restaurateurs wither at the very notion that they could use convenience foods or mislabel anything. Yet misrepresentations certainly occur, sometimes even among the staunchest supporters of truthfulness.

There’s the meat glue scandal in which chunks of beef were glued and pressed into shape as filet mignon.

But, if there is a single type of food most likely to be misrepresented on menus it is fish. Not too long ago I ordered grouper in Florida at three different restaurants. Each time it was quite different, indicating that at least twice I was served something else. As recent investigations show, fish misidentification is rampant among restaurants, suppliers, and retailers, always involving the substitution of a less expensive fish for a more expensive one.

7 responses to “Truth in Menu”