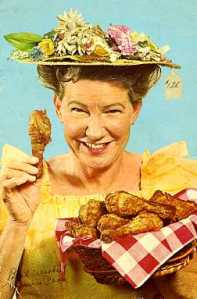 The 1960s were a boom decade for marrying fast food to franchise businesses christened with celebrity names. Chicken seemed like the up-and-coming successor to hamburgers in a business more about marketing concepts and stock quotations than food or hospitality. Following the success of Harlan Sanders, whose 500-unit Kentucky Fried Chicken chain mushroomed to 1,700 when he sold to a corporate buyer, entrepreneurs looked around for other celebrities to hitch their schemes to. Performers Minnie Pearl, Mahalia Jackson, James Brown, and Eddy Arnold, along with many sports figures, were persuaded to lend their names, rarely assuming any further involvement.

Minnie Pearl’s Chicken System, Inc., was the creation of Tennessean John Jay Hooker whose political ambitions included becoming governor, then president. Minnie Pearl, a Grand Ole Opry comedien whose frumpy stage persona suggested down-home eating, covered the white market, while gospel singer Mahalia Jackson lent her name to the black-owned side of the enterprise aimed at black inner-city consumers. Around the same time, ca. 1969, “king of soul” James Brown figureheaded the Gold Platter soul food chain which failed to get beyond the pilot stage in Macon, Georgia. Minnie’s and Mahalia’s ventures, too, lasted only a few years. Hooker, chicken systems mastermind, did not make it into office, but Benjamin Hooks, co-owner of Mahalia Jackson’s Gloree-Fried chicken (carryout only), went on to become executive director of the NAACP.

Though hailed as a restaurateur, Jackson received royalties for the use of her name but did not choose to invest in the Mahalia Jackson Chicken System, Inc. Perhaps she did not approve of its slogan: “It’s Gloree-Fried, and that’s the gospel truth.” The Minnie Pearl system totaled several hundred locations at its peak but it’s not clear how many outlets the Jackson chain comprised, probably many fewer. Chicago had only two units, paired with gas stations. The chain also operated in Memphis, Cleveland, Jacksonville, and Detroit. In addition to chicken, menus included fish sandwiches, sweet potatoes, fried pies, and a ‘Soul Bowl’ of chicken giblets in gravy on rice.