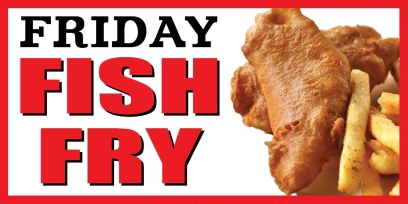 As early as the 1860s cheap eating houses in New York City were featuring fish on Fridays for their Catholic patrons. By then, one out of seven people living in the U.S. was Catholic and many of them lived in NYC.

By the next decade demand for fish by Catholics in New York largely oriented the city’s seasonal fish trade. According to an 1876 Herald story, the trade geared up at the start of Lent (the period of penitence preceding Easter), when the sale of fish reached a yearly peak. Hotels in New York and Boston – and no doubt cities elsewhere – used tons of fish in Lent and on Fridays year round. 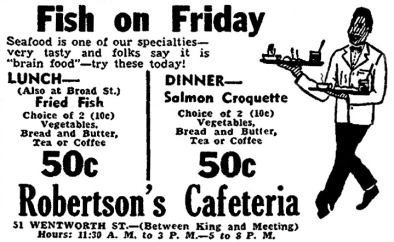 It’s likely that many of those not of the Catholic faith also ordered fish on Fridays since it was offered as a special in restaurants in many cities and towns and was also likely to be at its peak of freshness on that day. In the early 20th century, for example, restaurants in towns as far flung as Victoria TX, Holyrood KS, and Mansfield MO advertised fish on Fridays. When meat prices rose in 1916, even more fish was sold. The country’s largest restaurant chain, Childs – which had previously only put fish on its Friday menus – began offering it every day.

Fish could be baked, of course, but in the 1930s many restaurants began to advertise Friday fish fries. Judging from the number of advertisements, fish fries were especially popular in Ohio, Indiana, Illinois, and Wisconsin. In Milwaukee WI, tavern fish fries were particularly popular. There the Haller Inn in 1935 advertised a fish fry for only 15c with music by the Melody Boys.

Fish was also a popular menu item during World War II when meat was rationed. By the war years, it had become such a Friday menu staple that many operators decided that since so many people ordered fish on Fridays anyway they would promote eating fish on Tuesdays to save their meat ration points. 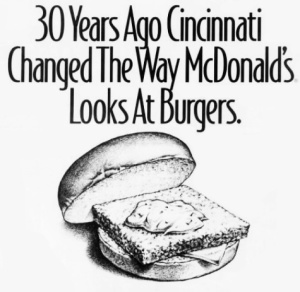 Fish on Friday was so popular that in the early 1960s a Cincinnati man who operated a McDonald’s persuaded Ray Kroc to add a fish sandwich to the chain’s menu. Kroc resisted the addition, preferring to keep the menu restricted to hamburgers, but in 1962 began to introduce the Filet-O-Fish sandwich. It became a permanent menu item around the country within a couple of years. [McDonald’s ad, 1992]

In December 1966, the Vatican released Catholics, now numbering 45 million in the U.S., from the ban against eating meat on Fridays. For a couple of years the fish industry suffered significant losses, particularly with cheaper frozen fillets whose use had been growing since the 1950s. The industry responded by encouraging the public to eat fish on any day of the week. Fast food chains appeared featuring fish and chips. Fish once again became a notable part of the American diet, despite the fraction of Catholics who had come to dislike it. Rather surprisingly, at the end of 1969 the head of the Commercial Fisheries Bureau of the U.S. Fish and Wildlife Service proclaimed that fish was very popular and that lifting the no-meat ban was “the best thing that ever happened to us.” 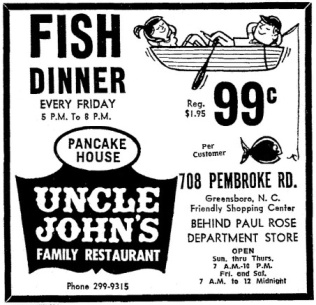 But the fish on Fridays custom lived on in some places, especially during Lent (when the no meat on Friday ban still held). But not only in Lent. Although nowhere did the custom remain as popular as across the Midwest, restaurants with Friday fish fries and fish specials could even be found in North Carolina, which historically had the fewest Catholics of any state in the U.S. [Uncle John’s, Greensboro NC, 1970] 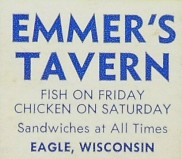 Milwaukee deserves special mention for Friday fish fries. In the 1980s even Greek and Vietnamese restaurants in that city held Friday fish fries. In 2000, a Milwaukee Sentinel poll revealed that readers ranked fish fries among their favorite restaurant choices, citing 320 different restaurants by name, and showing a strong preference for neighborhood places. Most often mentioned was Serb Hall, which will probably enjoy a lot of business over the next few weeks.

Famous in its day: Taft’s 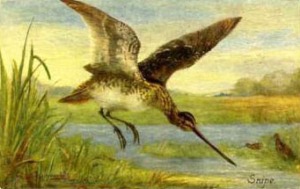 Throughout much of the 19th century game topped the list of desirable restaurant fare. Taft’s Hotel located on the shore at Winthrop MA, 5 miles outside Boston, attained widespread fame as a place to enjoy a fish or game dinner. Proprietor Orray Augustus Taft called his place a hotel but did not accommodate overnight guests. Taft’s was actually a seasonal restaurant serving parties by reservation only, from May through October. It was established at Point Shirley around 1850 and closed in the mid-1880s. 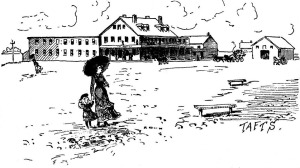 Taft’s was not much to look at. Two unattractive structures attached to the main building (shown here) held bowling alleys and billiard tables suggesting that groups often made a day of it. According to visitors of the 1870s, the resort might have had a nice view of the harbor if it had not been blocked by a reformatory on neighboring Deer Island. Taft’s fame was obviously not based on an elegant setup but rather on its provisions. Taft liked to entertain guests by taking them into his kitchen and showing off the contents of his ice chests. Fish came from the waters of Nantucket, Boston Bay, Long Island, and far beyond. Flat fish, such as turbot and plaice, were his specialty. Ducks and birds (snipe, plover, reed birds, grouse) came from all along the Atlantic Coast and the Great Lakes.

A couple of the strangest items on Taft’s menus were “owls from the north” and “humming birds in nut shells.” Exactly what the “owls” were is uncertain. Snowy owls, horned owls? Or, perhaps it was a code for something else altogether. Owls sometimes appeared on 19th-century menus for birds obtained in violation of game laws. On an 1877 Taft’s menu the selection was explained cryptically in parentheses as “Lady’s Birds.”

The hummingbirds, according to a hunter who obtained them for Taft, were actually bank swallows. Another opinion suggested they were English sparrows. Clearly they were tiny and many believed they were genuine hummingbirds. They were served in a delicately hinged nut shell, which opened to reveal what resembled a miniature roast turkey. A guest from Philadelphia reportedly felt they were “really not worth eating, being dry and tasteless.” “But,” he admitted, “I wanted to say that I had eaten a humming bird, and now I can say it.”