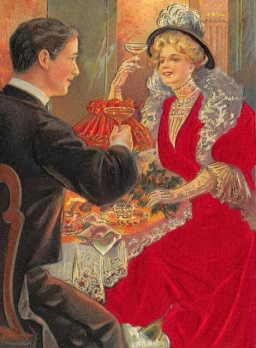 In the late 19th and early 20th centuries, the sight of women drinking in public brought up the same kind of issues about women’s status in society as did the struggle to get the vote. According to deep-seated beliefs about gender roles that had been forged in the 19th century, the proper realms for women were church and home.

Engaging in politics and drinking alcohol were definitely not approved of for women, particularly women of the middle and upper classes.

But in the late 19th century the prevailing gender rules seemed to be threatened, especially in New York City where “fashionable” women were drinking in public view in first-class restaurants such as Delmonico’s and the Brunswick Hotel. “No Longer a Sly Nip,” reported the New York Herald in 1894, stating that women who used to conceal their drinking with “cocktail opera glasses” and “creme de menthe fans” now were brazenly drinking openly, even at daytime shopping lunches. “Is this an evidence of the so-called ‘emancipation of women?’” the writer asked. 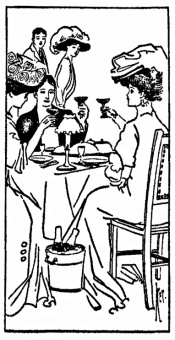 The supposed wickedness of wealthy New York women would become a popular topic in succeeding decades. Stories indulged an interest in the doings of privileged women of fashion and at the same time allowed readers to feel morally superior.

Opposition to women drinking grew stronger. In 1901 the Women’s Christian Temperance Union (W.C.T.U.) declared a crusade against women drinking in restaurants. New York president Ella Boole made an in-person survey of New York restaurants with a reporter from the Sunday World, who concluded that women’s “range of tipples is identical with that of men, and include the cocktails, the ‘Scotch highball,’ the sherry cobbler, absinthe and liqueurs. They drink at luncheon, at dinner, at supper, and frequently in between times.” According to the story, drinking went on in public restaurants and cafes, hotel table d’hotes, and just about anywhere.

Taking an inventory of women drinking in public spread. The pastor of a Congregational church in Chicago led a tour where his group tallied 269 “boozing women” out of a total of 463 women encountered in restaurants.

But even more alarming to the anti-drinking forces than the fact that “women of high grade and their imitators” drank liquor was the fact that they did it in public restaurants – and no one seemed to care! Where was the outrage, the shame? The head of the Daughter of Temperance thought women who drank “without shame in public places” should be ostracized. Otherwise, she feared, Womanhood, The Home, and The Race were in peril.

There was a lot of sermonizing. Actress Lillian Russell advised women that they would ruin their looks if they drank. But the most interesting observations on the subject came from an experienced New York hotel proprietor (alas, unnamed). Yes, women were drinking in public, he said, but they were freeing themselves from their old bad habits. He named fainting, hysteria, and using opiates like morphine. He found that women rarely got drunk in public, and saw their drinking as a sign that they were becoming more engaged in public life. Over the years, he said, he had witnessed women taking better care of themselves, becoming “healthier and happier,” and growing more companionable with their husbands. 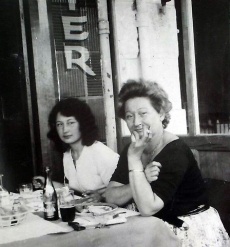 Not even Prohibition could put an end to women’s drinking. True, it was not observable in public restaurants, but women continued to drink in speakeasies and private homes. By the early 1930s when alcohol again became legal, at least in most cities, it had become perfectly respectable for women to drink in public. Although women were still not welcome to stand at the bar in taverns, it was just fine if they ordered a before-dinner cocktail in a restaurant. What was once a privilege found only among women of the leisure class had become a commonplace custom.

13 responses to “Women drinking in restaurants”