The Lunch Box, a memoir

There is little glamour surrounding the operation of most restaurants. They demand hard work, long hours, and relentless determination. Few stay in business long or bring their owners great riches.

All of these observations apply to the Lunch Box. Except one. The Lunch Box stayed in business for 35 years, becoming a well-loved stopping place along the road in the small Western Massachusetts town of Williamsburg.

But, glamour? As its owner, Anthony “Tommy” Thomas, writes in his recently published book, “the happiest day of owning the Lunch Box was the day that we hooked up to the sewer line.”

After that, he no longer had to worry about overuse of the restrooms. 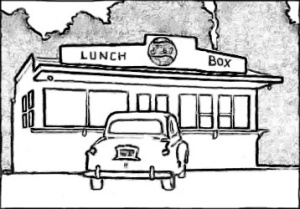 In 1968 Thomas bought the small roadside restaurant that had begun in 1949 as a hot dog stand. Since then it had been enlarged [see below], never quite meeting the building standards he would have liked.

Thomas, like the owners of so many modest eating places, had been disappointed working for others and was strongly attracted to the risky idea of having his own business. Given the woeful condition of the restaurant, along with considerable misery in the lives of previous owners, the Lunch Box seemed overrun with risk and negative vibes. But that didn’t stop him.

In addition to hooking up to a sewer line, he also discovered in the early years that he needed to install a grease trap. For 35 years he cleaned it himself, an arduous task since it was located in a crawlspace under the building. “I had to crawl under and take the trap apart, take the pieces that needed to be cleaned and drag them outside, clean them and then crawl back under to put the trap back together,” he explained. He also spent many an hour defrosting frozen water pipes. 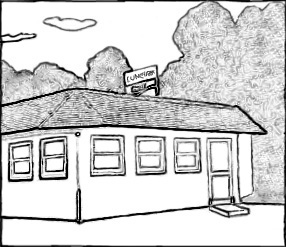 The small kitchen, with a ceiling “so low that a person six feet tall would have to bend over to use the stove,” was equipped with an “apartment size gas stove.” The original cash register could not ring up an order over $5, and had to be supplement with an adding machine to total checks. Shortage of capital meant that major improvement projects had to be deferred, particularly when it came to solving the building’s heating and cooling problems. “We were always cold on really cold days and hot on the very hot days,” he wrote.

Eventually he was able to rebuild the Box, adding a second story and a peaked roof [see book cover above]. And, he and his wife were able to raise four children, though it must have been tough at times. As he says, “There were years when my tax returns showed hardly any income and I was fortunate that I was in the food business so I could feed my family.”

Thomas took great pride in his other roles, admitting – rather surprisingly — that “The most rewarding in my judgment and the most important aspect of my life outside of my family was my time serving as a firefighter/EMT.” I was surprised that he did not cite the restaurant. He worked as a firefighter and EMT in both Williamsburg, where the Lunch Box was located, and in neighboring Goshen, where he lived. And he served as a Goshen Selectman for years.

He inherited the cafe’s reputation as a “woodchopper’s diner,” but he improved the quality of its comfort food menu by using fresh local produce whenever possible. He took great care in testing brands of coffee before selecting one. He saw to it that soups and pies, previously purchased, were made in house. The Box’s comfort foods, such as shepherd’s pie, macaroni and cheese, and meat loaf, drew locals, public officials, police, truck drivers, woodsmen, and a wide range of others including a few who traveled some distance to eat there regularly.

As is often the case with roadside diners, over the years the Lunch Box became a community hub where business was conducted, friends met up, and local news was exchanged. In a book with plenty of anecdotes, it becomes clear that each day promised new adventures with the Lunch Box right in the middle of it all. [photo: The Lunch Box float in Williamsburg’s 225th anniversary parade]

2 responses to “The Lunch Box, a memoir”