In the early 1900s with the growth of Broadway’s fame as a place for flashy people to see and be seen, no one stood out from the crowd like James Buchanan Brady. Known across America for his large collection of diamonds which he boldly wore in public, he inspired others to display trappings of wealth. In the words of Parker Morell, author of a 1934 book about Brady, “Jim was the diamond studded decoy duck that filled the coffers of New York’s merchants.”

Those merchants included not only the jewelers of Maiden Lane, but also the restaurateurs of Broadway. Among his favorites were Rector’s, Churchill’s, Shanley’s, Healy’s, Murray’s Roman Garden, [see below] and others on and off Broadway. In 1917 he gave a talk at a dinner of the New York Society of Restaurateurs where he contrasted Broadway’s restaurants with the downtown places of his much poorer early days where a plate of corned beef and beans cost 10 cents.

Brady was a highly visible regular in restaurants and so-called “lobster palaces.” The proprietor of Rector’s, the reigning palace of lobsterdom, referred to Jim as “our ten best customers” due to his frequent visits coupled with the vast amount of food he was alleged to consume. And of course his presence in hot dining spots attracted celebrity hunters galore.

But did his celebrity also win him a get-out-of-trouble ticket – or did he simply live in a time when being super rich brought immunity from scandal? As “America’s greatest salesman,” James Brady frequently hosted parties of visiting businessmen whose contracts he was courting as a major player in the railroad equipment business. He could spend up to $3,000 (in 1904, equal to $82,000 now) for an evening’s entertainment which might also include the company of well-paid chorus girls or visits to women on the shady side of town. He freely poured wine for his guests, but he did not drink. Orange juice was his preferred accompaniment to meals – at a time when it was not considered a customary beverage.

Despite the expensive dinners he gave, he showed a contradictory attitude toward restaurant spending. According to George Rector, Jim swore he would not come back to Rector’s after it levied a 10-cent cover charge. Of course he did return, but why argue over such a minuscule fee? And when he was charged with extravagance, he countered defensively that extravagance meant spending money you didn’t have or wasting it on worthless things. He, on the other hand, spent his well-earned money on simple dinners such as what he called his “one-two-three”: Lynnhaven oysters, terrapin, and canvasback duck. Expensive, yes, but not extravagant “because you get your money’s worth.”

He could be generous. According to gossip columnist O. O. McIntyre, when Brady died in 1917 he had a number of elderly waiters on pensions.

He began acquiring and wearing diamond jewelry in the 1880s when he became a traveling salesman for a railroad equipment company. According to Morell’s book Diamond Jim, it was common then for traveling men to wear diamonds, and to gamble with them too. Brady was able to build a collection by winning at cards and dice. Displaying his collection to business associates and clients proved to be a good way to impress them and make sales. By 1893 he was ordering diamond-crusted pieces and sets that were custom designed exclusively for him. When he attended meetings of railroad directors he often wore his “transportation set” that included cufflinks resembling tank and coal railcars, and shirt studs in the forms of a bicycle, auto, and airplane. 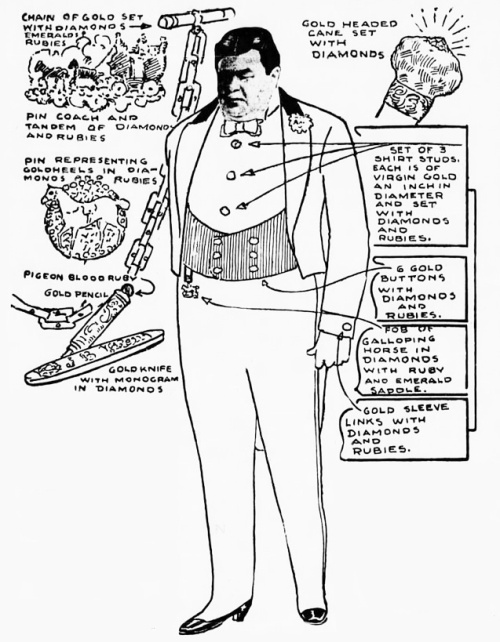 According to some accounts, his jewels may have made him a nationally known celebrity and an effective salesman, but failed to win him acceptance by genteel society. Perhaps he regretted his glittering reputation. Headwaiters bowed down to him but he was sometimes ridiculed in newspapers. The Baltimore Sun ran a story in 1913 titled “Reckless Money Spenders of America in a Delirium of Extravagance Rival Rome’s Profligates” that spotlighted Diamond Jim and implied he bribed railroad purchasing agents.

He faced further unfavorable scrutiny the following year when testimony before the Interstate Commerce Commission revealed that the inexplicably debt-ridden New York, New Haven & Hartford Railroad Co. had, among other transgressions, bought railcars and equipment from Brady totaling $37 million without competitive bidding. In his ICC testimony Jim freely admitted that he had been very generous to the company’s officials – but simply because they were old friends. He also told the commissioners that he kept no books because “I don’t propose that anybody else shall know how I have built my business.”

Well, at least he could eat. Though it was often recounted that he consumed prodigious quantities of oysters, lobsters, and game, I am skeptical about this since the accounts seemed to be part of legend-making after his death. Nonetheless, his diet, which included half a pound of candy daily after he cut down following a diagnosis of diabetes, seemed to have a disastrous effect on his health. In 1912, and later in his will, he donated a large sum of money to Johns Hopkins Hospital for surgery he said gave him a “new stomach.”

When he died, James Brady’s fortune, including his diamond collection – though quite substantial — turned out to be smaller than expected. Obviously “Diamond Jim” was largely a media creation. The man vanished in 1917, most of the restaurants failed with Prohibition, but the fantastic stories have persisted.

5 responses to “Dining with Diamond Jim”