Although a number of superior restaurants have opened in airports in the past several years, their run-of-the-mill food purveyors are often just passable. Customer comments reveal praise for certain restaurants, but opinions overall sound a negative note, rising to weak compliments such as “actually somewhat good” or “standard innocuous restaurant/hotel fare.”

In the beginning, there was no food at all. In the 1920s airports had no restaurant facilities. There were scarcely any commercial flights, facilities consisted mainly of fields and a hangar or two, and the few commercial passengers were lucky if they could get a cup of coffee.

By the mid-1930s more commercial flights were offered and airport conditions improved. The number of passengers multiplied more than 100 times between 1926 and 1935. To win greater traffic, bigger cities vied to create terminal facilities that could match those of their transportation rival, trains. Restaurants figured prominently among the amenities offered.

Most passengers in the 1930s, 1940s, and 1950s were businessmen or wealthy travelers who were unwilling to settle for bad food. Even though all air travel was essentially first-class then, passengers frequently rejected what was served on the plane and tried for something better in the terminal. Their demands, combined with the need to put airports in the black financially, brought about efforts to create first-rate airport eating places. 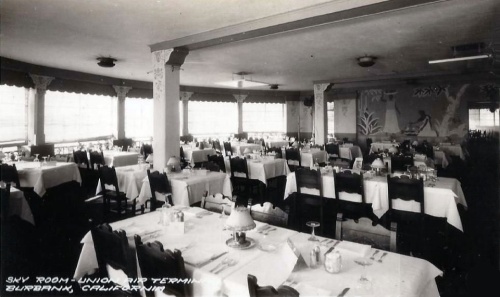 The earliest image of an airport restaurant I’ve found is that of the Sky Room in Burbank CA’s Union Air Terminal (now Bob Hope Airport), in 1940, showing tables with white linens, goblets, and boudoir-style table lamps.

Airports were costly for cities and towns to build and run so income from concessions was needed badly. Managers expected income from non-aviation concessions at New York’s Idlewild airport to make up one third of revenues in 1949. Restaurants and coffee shops were the biggest single contributors of concession revenue in most airports.

But restaurants found it hard to operate profitably when serving only “captive customers,” particularly when their numbers were still relatively small. Beyond pleasing airline passengers, the solution for many airports was to reach out to customers living nearby. In 1947 the airport restaurant in Albuquerque NM went so far as to hire a chef who had studied with Escoffier and cooked for US presidents and royal families in Europe. His mission was to make the terminal restaurant one of the nation’s best known restaurants.

The early 1950s saw the debut of what might have been America’s premier airport restaurant, The Newarker in the Newark NJ terminal. With Joe Baum as manager and Albert Stockli as chef, it soon became famous, launching Restaurant Associates which owned many of NYC’s top dining establishments. Duncan Hines lauded The Newarker for its “flaming sword specialties, authentic East Indian curries, [and] regional Swiss specialties.” 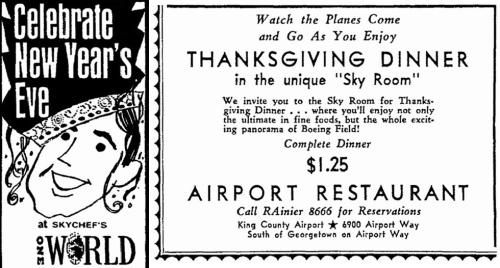 Evidently the tactic of pulling in locals worked, partly because even through the 1960s people were thrilled to see planes take off and land. Dining rooms typically overlooked the airfield. In 1953 Fort Worth’s new terminal at Amon Carter Field was touted as “a wonderful, quiet spot to have a leisurely evening meal and then sit on the observation deck and look at the bright lights of booming Dallas nineteen miles away.” Now it may seem an odd idea to go to an airport restaurant to celebrate a birthday or, even stranger, a holiday such as Thanksgiving or New Year’s Eve, yet these festivities did indeed take place [advertisements: Cleveland, 1965; Seattle, 1941].

Some airport restaurants were operated by local restaurateurs. Among them was Marie Schreiber, who became a restaurant operator for Statler hotels after providing meals in Cleveland’s airport restaurant [pictured] as well as on-board meals for departing United Airlines flights. Food service operations of two Chicago departments stores, Marshall Field and Carson, Pirie & Scott, handled meals at O’Hare for years.

At the same time, chains that ran airport restaurants and prepared meals for service during flights developed rapidly. Some, such as Skychef restaurants, were operated by the airlines (in this case American Airlines), but existing chains such as Dobbs House and railroad caterers Fred Harvey and Interstate Hosts also migrated into airports. Dobbs House units in airports from Wichita to Miami also earned praise from Duncan Hines in 1959 for dishes such as pompano en papillote and Colorado mountain trout.

Southern airports were protest sites because of their discriminatory treatment of Black passengers. Until summer of 1961, Blacks were not served in Interstate Hosts’ main dining room or the coffee shop in New Orleans’ Moisant International airport, but only at the snack bar. After lawsuits, Black customers gained equal patronage at all airport restaurants in recognition that airports, like bus terminal facilities, were fundamental to interstate commerce.

In the 1980s theme restaurants – often flight-themed – began to locate in the vicinity of airports. But that’s a subject for a future post.