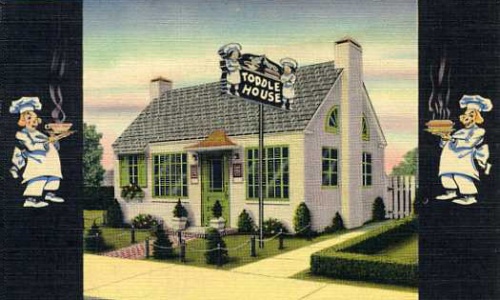 The Toddle House chain occupied “cozy cottage” style buildings that were quite popular as restaurants, gas stations, and cabin camps in the Depression. On the outside Toddle Houses projected an exaggerated Colonial doll-house version of domesticity, with two oversized chimneys and a primly manicured lawn.

Inside, though, a very functional, almost clinical interior greeted customers: A back wall of stainless steel kitchen equipment, a counter with a dozen comfortless, backless stools (“in and out in 12 minutes”), bare windows, bathroom-tile wainscoting, and NO fireplaces. Open 24 hours, their menus were limited and featured hamburgers and breakfast at all hours. 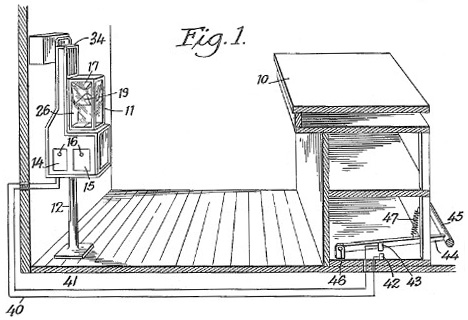 Adding another touch of no-nonsense modernity was the “cashier machine” invented by founder and co-owner J. C. Stedman. Designed to keep the countermen (later women) from handling money, a mechanical box near the door received meal checks and payments in coins. After a counterman observed, via a mirror inside the box, that the customer had deposited the correct amount, he lifted a treadle behind the counter and the money and checks fell through trap doors into locked bins below (nos. 14 and 15 in the patent diagram).

As awkward as the contraption was – not giving change, easily circumvented by cheating employees, etc. – it remained in use at least until the 1940s and customers liked it. In Evanston IL customers felt let down, their trustworthiness in doubt, when the cashier machine was replaced by a standard cash register in 1945. Today, the old drop box system — in my view mistakenly considered an honor system — has become an object of nostalgia.

The first Toddle Houses were opened in Southern states, principally Texas and Tennessee, in the 1930s. The chain never made it farther west than Omaha. In 1945 the company expanded northward with the acquisition of 46 Hull-Dobbs Houses, which resembled Toddle Houses to a remarkable degree. Toddle Houses built later were larger and of a style referred to as “New South” shown here that was plainer and even more symmetrical. Some had dining rooms and the front entrances with copper-clad canopies were enclosed by glass vestibules.

In 1946 Toddle Houses created Harlem House, for Black customers who were not otherwise welcome. Eventually there were 12 such units in Memphis, the company’s headquarters. An Atlanta Toddle House was the site of a prominent civil rights sit-in demonstration in December of 1963, in which demonstrators including comedian Dick Gregory were taken to jail. 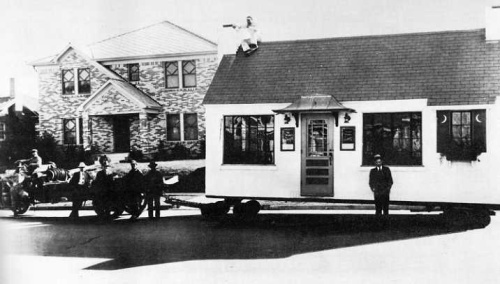 The original 24 × 12-ft Toddle Houses were prefabricated and shipped to their sites on flatbed trucks. It has been reported that their exteriors were of porcelain-coated steel for portability. Since this material is inappropriate for Colonial architecture and they do not appear to be shiny in pictures, I find the description given in Philip Langdon’s Orange Roofs and Golden Arches more convincing. He says that some Toddle Houses were “veneered with a cement coating scored to resemble brick.” Others were built of brick on site. Langdon also observes that because early Toddle Houses could be transported so easily, the possibility of moving them presented advantages when negotiating land leases. I discovered a number of them that were in fact moved.

In 1962 the Toddle House company was bought by Dobbs House which turned most of them into Steak N Egg Kitchens. In the 1980s, after another company, Carsons, bought out Dobbs, an attempt was made to revive the Toddle Houses, which by 1984 had dwindled to 11 units. Carsons built at least 45 new Toddle House units.

Though Toddle Houses no longer exist, many of the buildings continue as eating places or have been adapted for other uses, as shown in a blogpost by Dinerhunter.