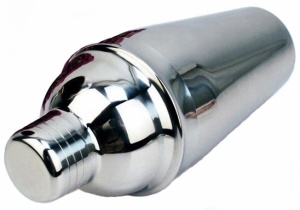 Living as we do in the era of lunch at your desk, the three-martini lunch might well conjure up appealing images of editors and advertising executives on expense accounts, clinking glasses over a leisurely repast at New York’s “21″ Club as they sign up famous authors or land new clients.

But just how common was the three-martini lunch?

Martini cocktails became popular in the 1890s and no doubt were often enjoyed at noontime, but the phrase “three- (or two- or four-) martini lunch” did not come into use before the 1950s.

It was more a political slogan than a description of what was swallowed at lunchtime.

It first cropped up in an efficiency campaign during the administration of Dwight D. Eisenhower when Washington bureaucrats were informed in 1953 that the long lunch, with its “two” martinis, would no longer be tolerated.

But that was a mild martini attack compared to the one Jimmy Carter would launch during his administration. In a September 1976 debate with President Gerald Ford, candidate Carter tied the “$50 martini lunch” to Republican tax laws that subsidized the pleasures of the privileged few with the taxes of hard-working folk. After he was elected, cutting business lunch income tax deductions by 50% became a contentious element in Carter’s tax reform package.

To counter Carter’s attempt at clipping expense account meal deductions, restaurant and hotel associations published surveys about what real businessmen (yes, men) did at lunch, which included the following:
• The average businessman spent $3.93 for an expense account lunch.
• Even at the “21″ Club, most lunches cost $18 to $20, not $50.
• The typical expense account lunch consisted of sandwich, french fries, vegetable, and salad.
• Coffee was the beverage most often ordered with expense-account lunches (27%), while cocktails were ordered only 3% of the time. The order of drink popularity was: coffee, soft drinks, hot or iced tea, milk, fruit or vegetable juice, shakes, cocktail, beer, wine.

In the 1970s new profiles of the drinking habits of top executives emerged. Rather than iron men who could down three martinis or other potent drinks while doing business and go back to work refreshed, they were depicted as pathetic alcoholics who had to be helped bodily out of restaurants and who collapsed onto their office couches to sleep off the effects.

But change was occurring. Martinis were out. It was becoming fashionable to sip white wine at lunch, or to spend the time at a health club. Although Carter’s tax reforms failed, in the 1980s and 1990s business lunch deductions were whittled down, first to 80%, then to 50%. The restaurant industry, contrary to predictions, was not grievously injured and lived to see another day. And many corporations instituted programs for alcoholic employees.

7 responses to “The three-martini lunch”