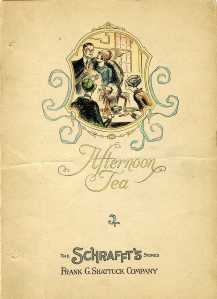 One of my most-treasured menus is a grubby, dog-earned Afternoon Tea menu from Schrafft’s at 181 Broadway in NYC dated September 3, 1929. What makes it so great is that it was carried off from the restaurant by someone who took detailed notes concerning a number of dishes. Apparently (judging from the notation “Monday & Wednesday”) the “spy” made two visits to the restaurant. The menu has holes along the side as though it was kept in a binder for reference.

I have always imagined that the spy, who must have been accompanied by a few friends, was a rival tea room operator hoping to learn a lesson or two from a successful competitor. The notes really bring the menu to life, and also give a feel for just how scanty tea room dishes could be. I had read that tea rooms were often criticized for their high-priced “bird-like” portions. I see from this menu that there was some truth in the charge.

The prices are indeed high. It is difficult to be confident about today’s equivalents to the prices below, but keep in mind that in 1929 a full dinner could be had at a decent restaurant for 50 cents. So, clearly, the sense in which Schrafft’s was a middle-class restaurant essentially means that it was easily affordable only to the upper middle class and above, though lower-income patrons may have enjoyed an occasional splurge there. 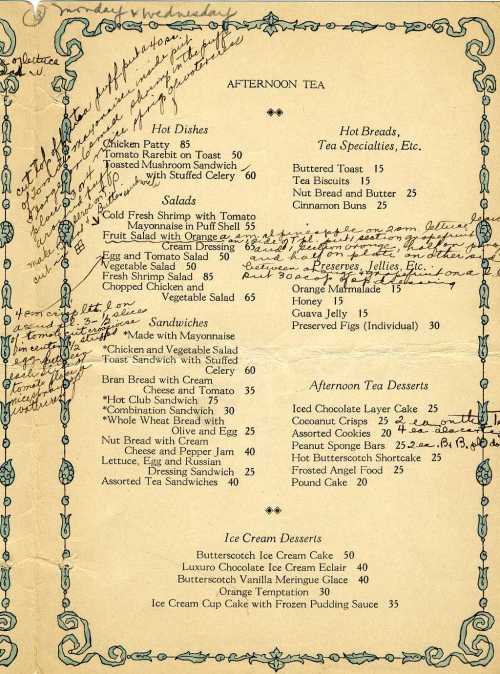 Here are a few of my transcriptions of the difficult-to-read notations, with my punctuation and explanations added:

Toasted Mushroom Sandwich, Stuffed Celery, Ice Cream and Cocoanut Crisps, Pot of Tea – 60 cents
Cut crusts off 2 sl. toast and ½ inch off remaining 2 sides; butter and cover with mushrooms, a nice piece of lettuce; cover with another sl. toast same size; spread with mayonnaise; cut in 3 oblong pieces; serve on a doily on a T. P. with 1 stalk of stuffed celery

Egg and Tomato Salad – 50 cents
4 pcs. crisp lett. laid on a salad pl.; 3 ½ slices of tomato, cut crosswise; in center ½ stuffed egg; between each slice of tomato, place a nice spray of watercress

Fruit Salad with Orange Cream Dressing – 65 cents
A small sl. pineapple on 2 sm. lettuce leaves; on 1 side 1 section orange, half on pineapple and half on plate; on other side between orange & grapefruit on a l. l. [lettuce leaf] put 30 sco[o]p of dressing

3 responses to “An annotated menu”