From tap room to tea room 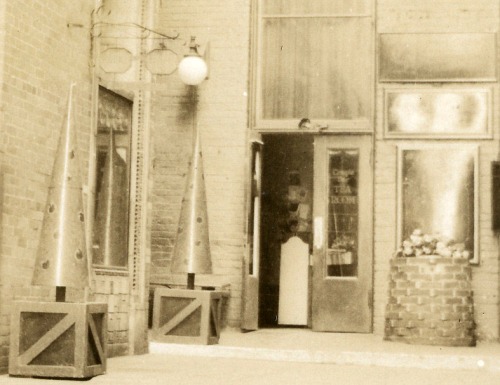 Cities in the United States were generously supplied with saloons before national Prohibition took effect. Saloons occupied some very choice sites, often on corners or other desirable spots. So it was quite a boon for other types of businesses such as drug stores and eating places when those locations became available en masse in 1919.

San Francisco’s Temple Bar was an English-style ale house established in the 19th century. Its name played upon London’s Temple Bar – which was a gatehouse, not a drinking place at all. One of its greatest assets was a magnificently carved rosewood and birch backbar said to have been made in Philadelphia in the 1840s. The saloon sat at the end of a quaint little cobblestone alley off Grant Avenue named Tillman Alley or Tillman Place. Just as Prohibition was set to begin, one of its best customers, on a whim perhaps fueled by too many drinks, declared he would buy it; William Davenport, a commercial illustrator who was used to capping off his afternoons there with colleagues from work, paid $300 for the place.

A few months later he and his young wife Hope opened it as the Temple Bar tea room and gift shop. It was also a circulating library which rented books for a small fee. Young Chinese women, dressed in Asian costumes, served lunch and afternoon tea.

William, who was known in artistic circles as “Davvy” and had designed posters for telephone companies up and down the West Coast, decorated the tea room in yellows, blues, and oranges, and fashioned an eye-catching orange sign. To liven up the outside he installed boxwoods in planters. However when they died, victims of the lack of sunlight, he replaced them with modernistic conical-shaped trees he constructed out of painted galvanized iron.

The alley was inhabited by other interesting businesses and studios such as that of metal craftsman Harry Dixon whose work was exhibited and sold in the Temple Bar gift shop. Another alley denizen was Ye Old Book Shop where George Hargens rapidly gained fame as a seller of rare old books. Grant Avenue was the city’s most fashionable shopping venue in the 1920s, so the Temple Tea Room and its neighbors on Tillman Place were well positioned to catch the attention of affluent shoppers from businesses such as the White House department store just across from the alley.

Hope died in 1932. Davvy carried on the Temple Bar until at least the 1950s when a reporter found him behind the bar mixing dry martinis and old-fashioneds for lunching shoppers. Since his time the location has had many reincarnations as restaurant, bar, and place of entertainment. The backbar was removed to Berkeley in 1990.

5 responses to “From tap room to tea room”