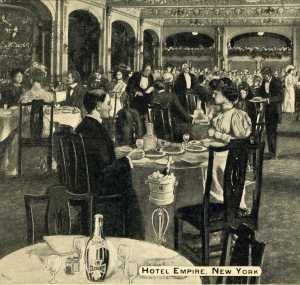 Product placement usually refers to the display of branded products in movies and TV shows, such as when the main character sips a certain cola or goes into a coffee shop and opens up his laptop with an image of a glowing piece of fruit clearly visible.

But manufacturers of national brand foods have long been eager to have their products on display in restaurants and that, too, is a form of product placement. In both the media and in restaurants the product is supposed to gain exposure and status by association.

Beverages were among the very first branded “food” products in the United States, and perhaps the first to place their bottles on restaurant tables and in restaurant advertising such as the 1908 Hotel Empire postcard above which features Clysmic bubbling spring water. First advertised in the 1880s as a homeopathic drink that cured cystitis and other maladies, by the early 20th century the water in the unusually shaped green bottle with the red label had become a cocktail mixer. The company put out a complimentary Booze Book which told how to mix drinks.

The Faust restaurant at New York’s Columbus Circle had similar postcards with slightly enlarged bottles of Coronet Sloe Gin and Old Quaker Rye Whiskey shown on tables in the foreground.

With restaurants it was a two-way street where food products were concerned: both the restaurants and the products sought to gain status. In the early 20th century people were distrustful of the cleanliness of restaurants as well as much of the food in the marketplace because of decades of widespread adulteration. This attitude became especially prominent following publication of Upton Sinclair’s sensational book The Jungle which exposed disgusting practices in slaughterhouses. To counter distrust branded food products began to advertise extensively and were quite successful in convincing the public they were pure.

The ever-clever “Fra” Elbert Hubbard, head of the Roycroft craft studios, developed sophisticated advertising copy in his publication The Philistine in 1901 in which he stressed that Heinz products were regularly used in the Roycroft inn’s dining room. Around 1902 the National Biscuit Company introduced industrially extruded (“shredded”) wheat to the public through restaurants, dining cars, and steamships.

Even into the 1940s and beyond, restaurants were eager to let patrons know that they used brand-name food products. “Brag About Brands” because it gives the customer confidence, suggested the New York Restaurant Association in 1946. Manufacturers — and their advertising agencies – continued to rely upon nationally known restaurants to give products name recognition and cachet. Heinz advertised extensively in the mid-20th century, with photographs showing patrons at restaurants such as Bookbinder’s in Philadelphia and the Brown Derby in Los Angeles using their catsup.

3 responses to “Product placement in restaurants”